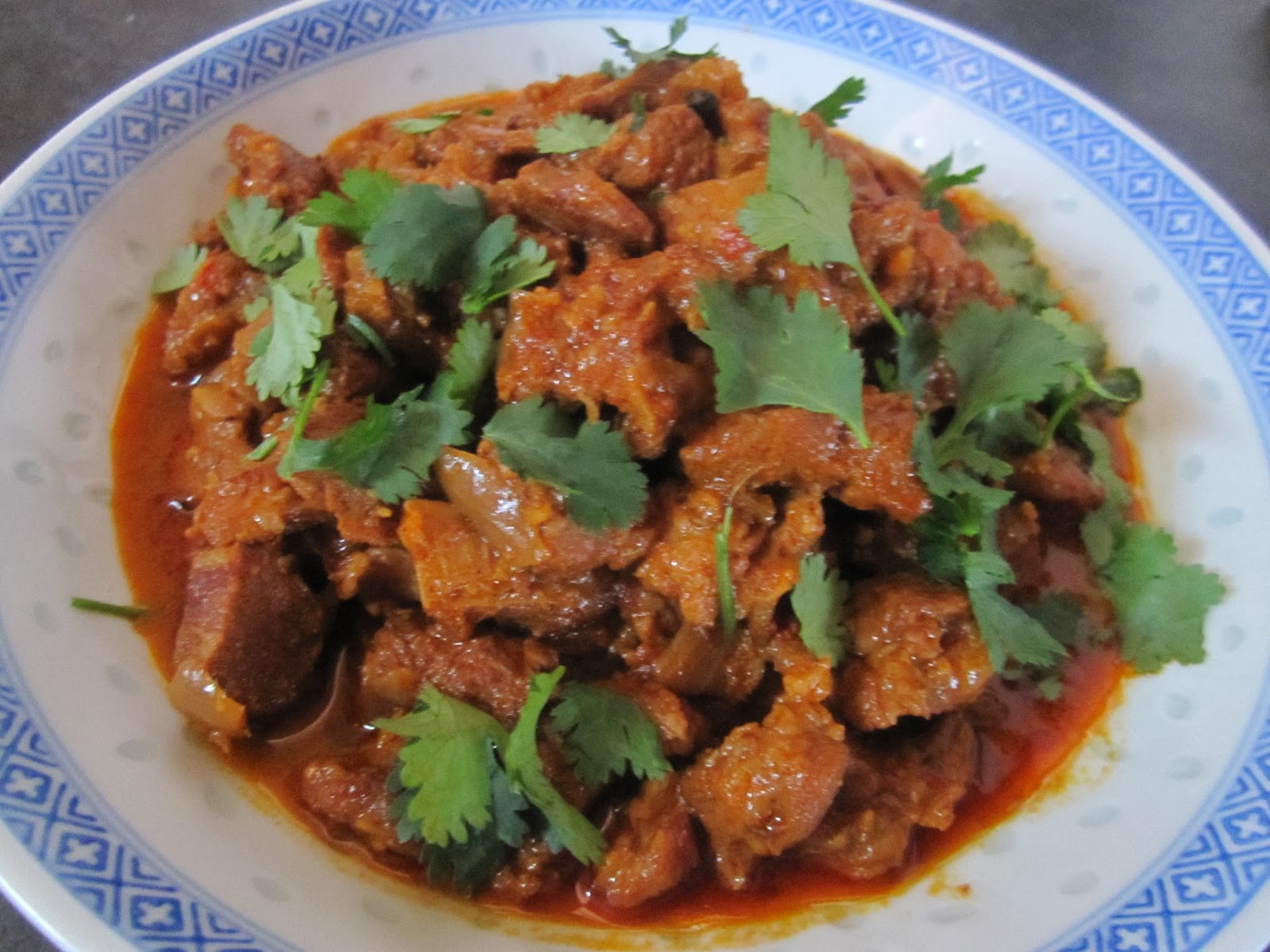 This lamb curry is awesome - one of the best curries I've made.  But I also think my lamb chile is the best chile I've ever had so I might just be loving lamb a lot these days. 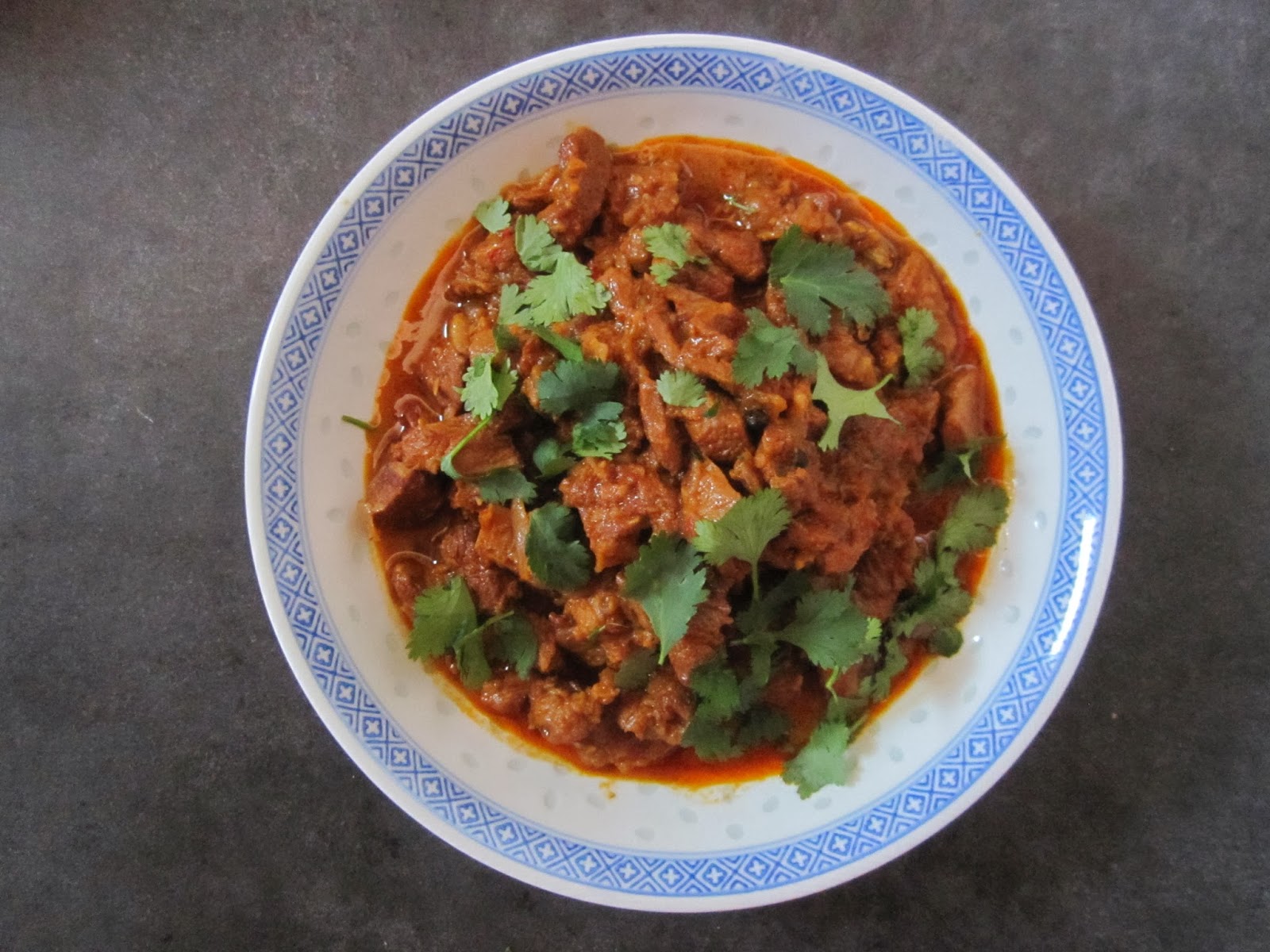 It's a bit spicy, but not too much, especially when served with rice or naan bread and maybe some raita. 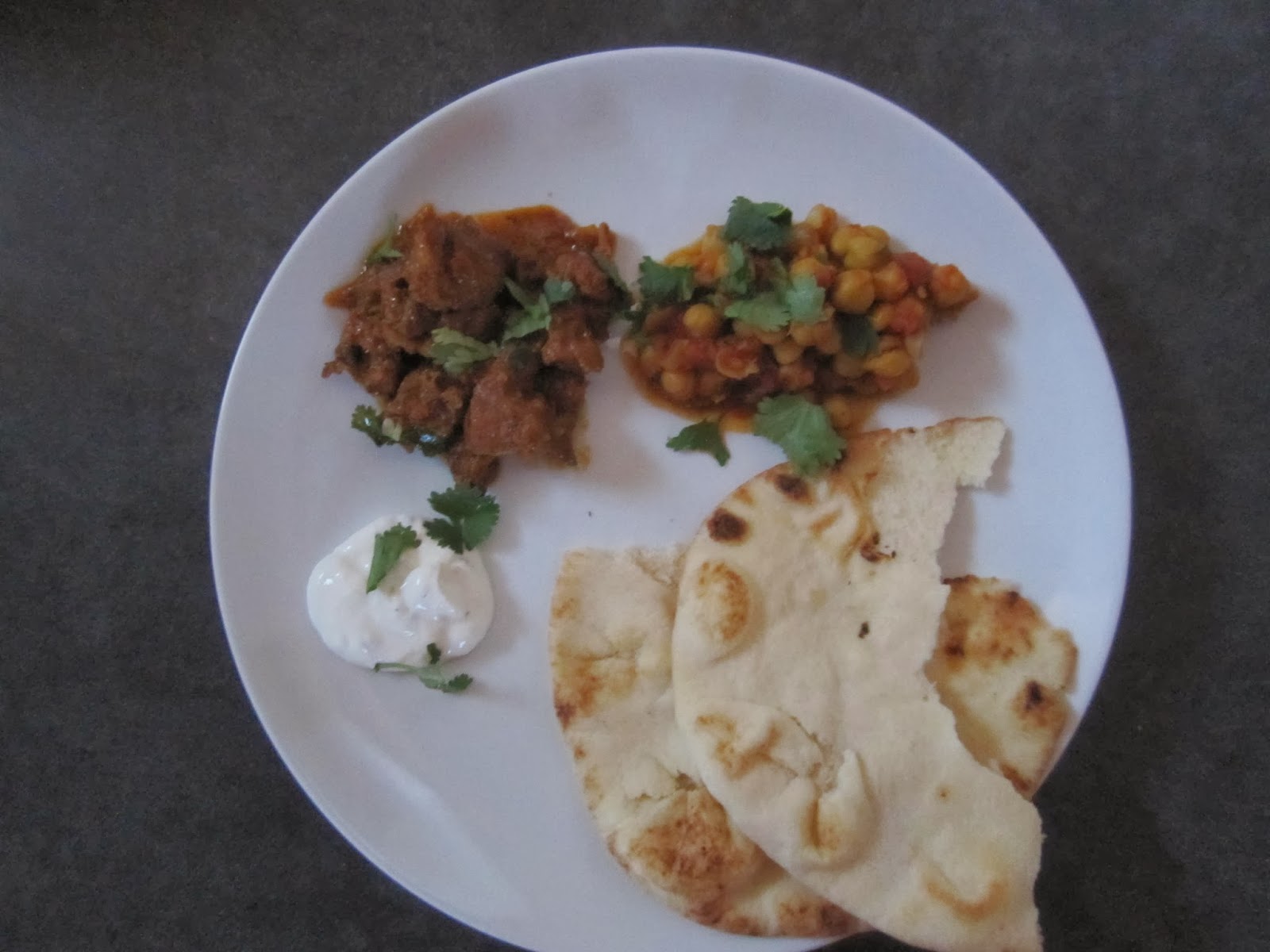 And this spice container really reduces the effort of prepping.  I don't keep spices in this all the time as it is not sealed well.  But if I'm in the mood for Indian cooking, I'll put the main spices in here.  Rather than opening and closing 7 different spice jars each recipe, they are ready when I need them!  In the middle is coriander ... then starting from the top and going clockwise are:  turmeric, whole cardamom pods, red chili flakes, cumin, paprika and garam masala. And, of course, a couple of cinnamon sticks hanging about. 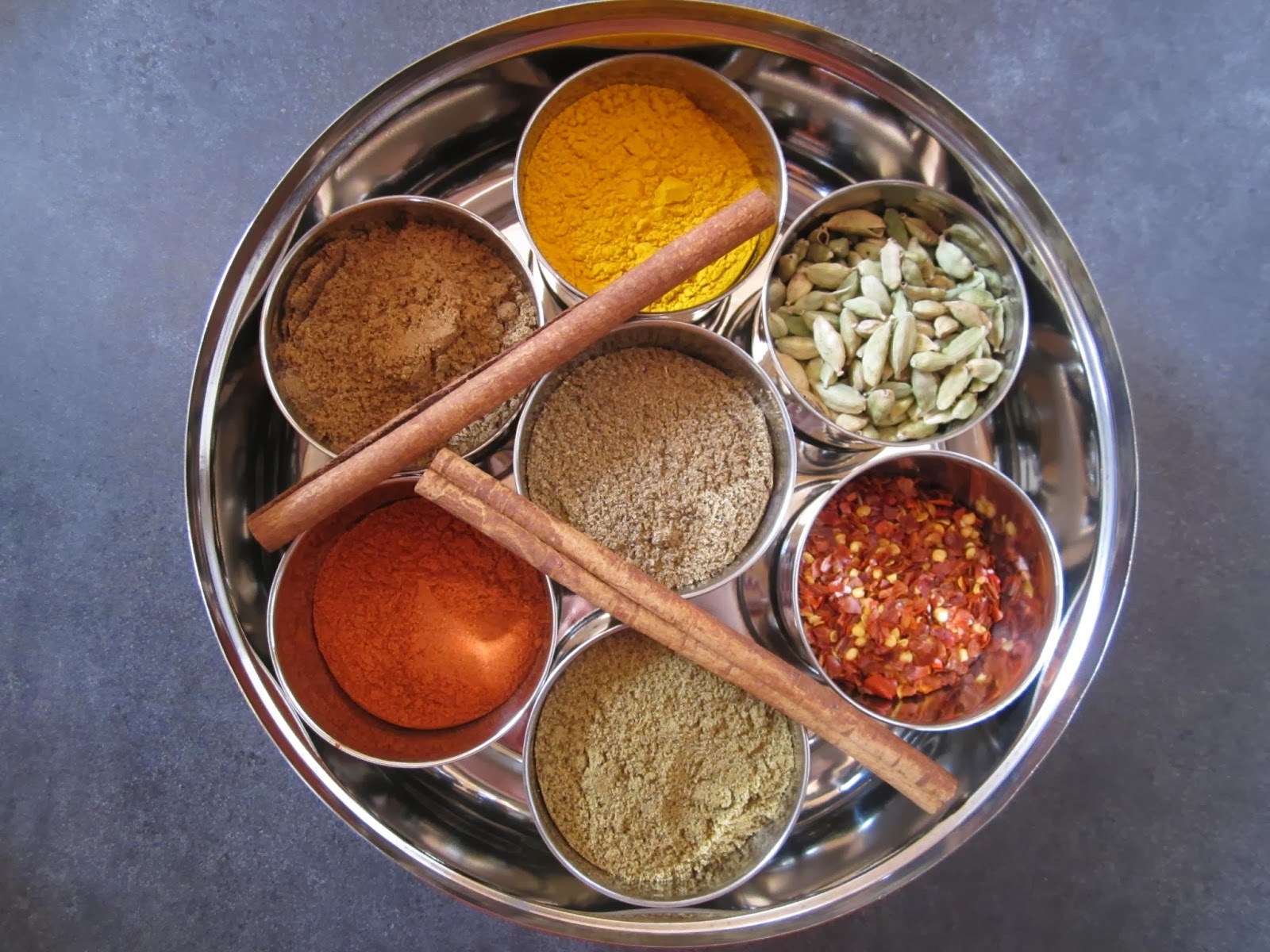 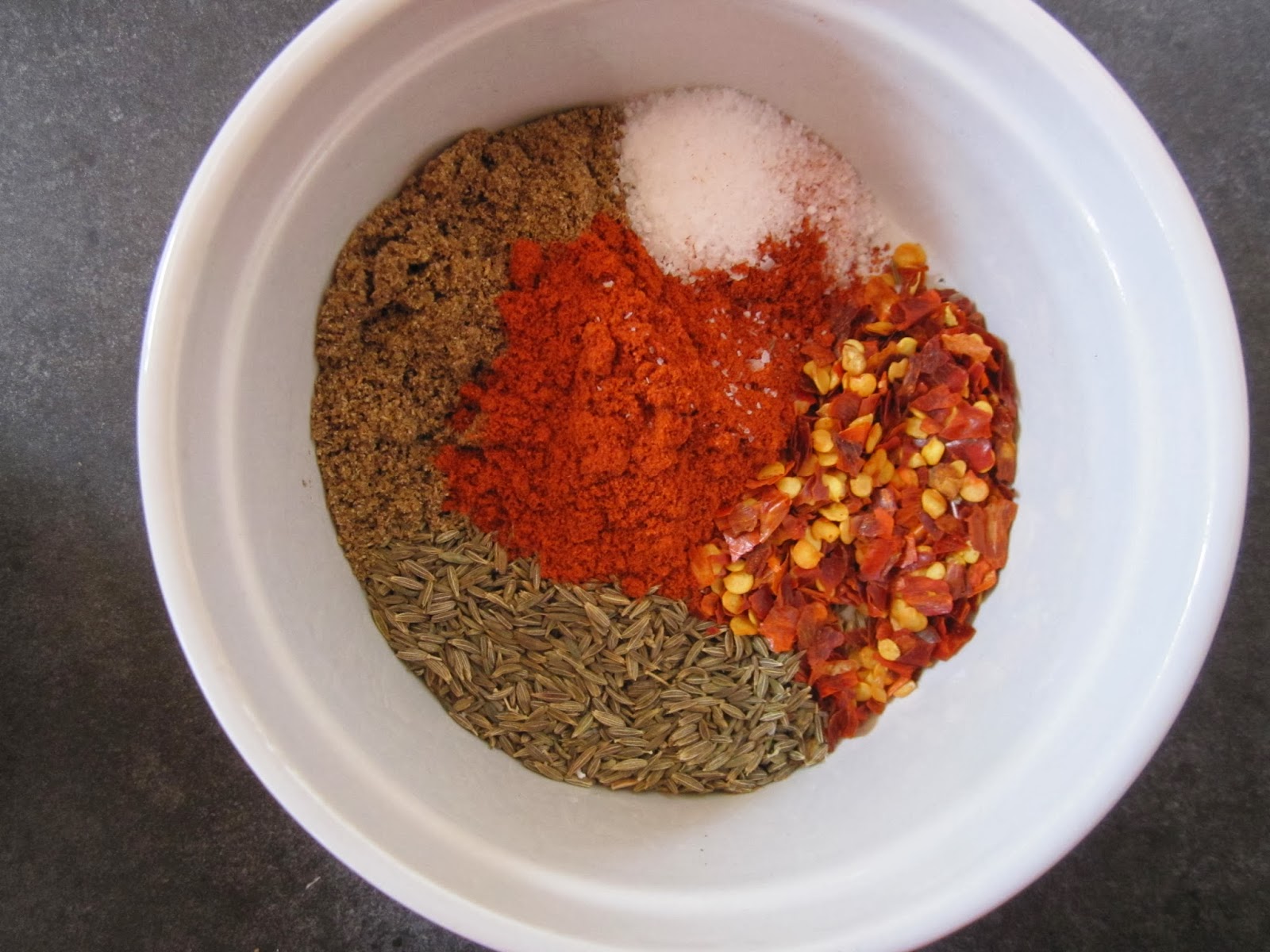 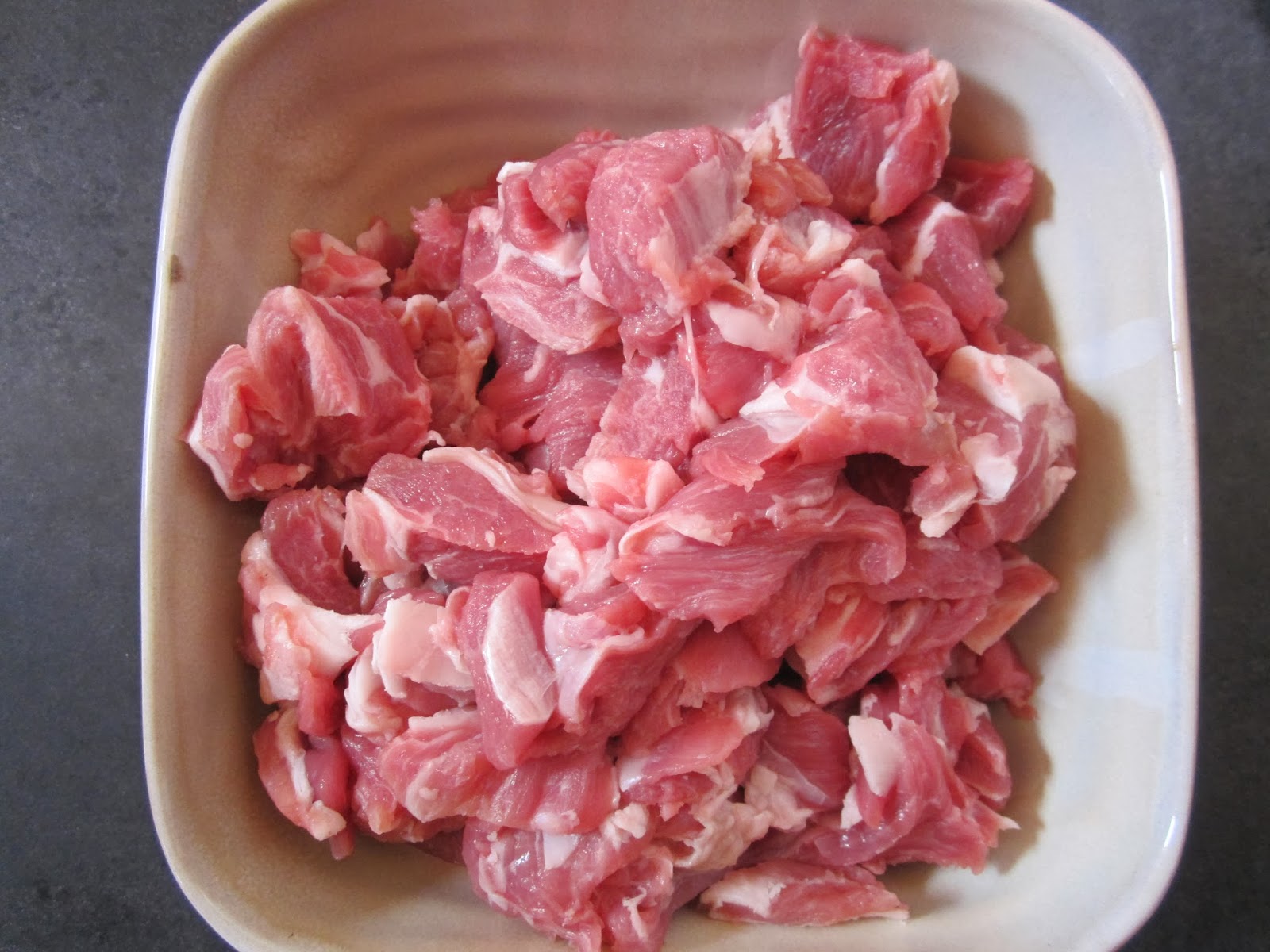 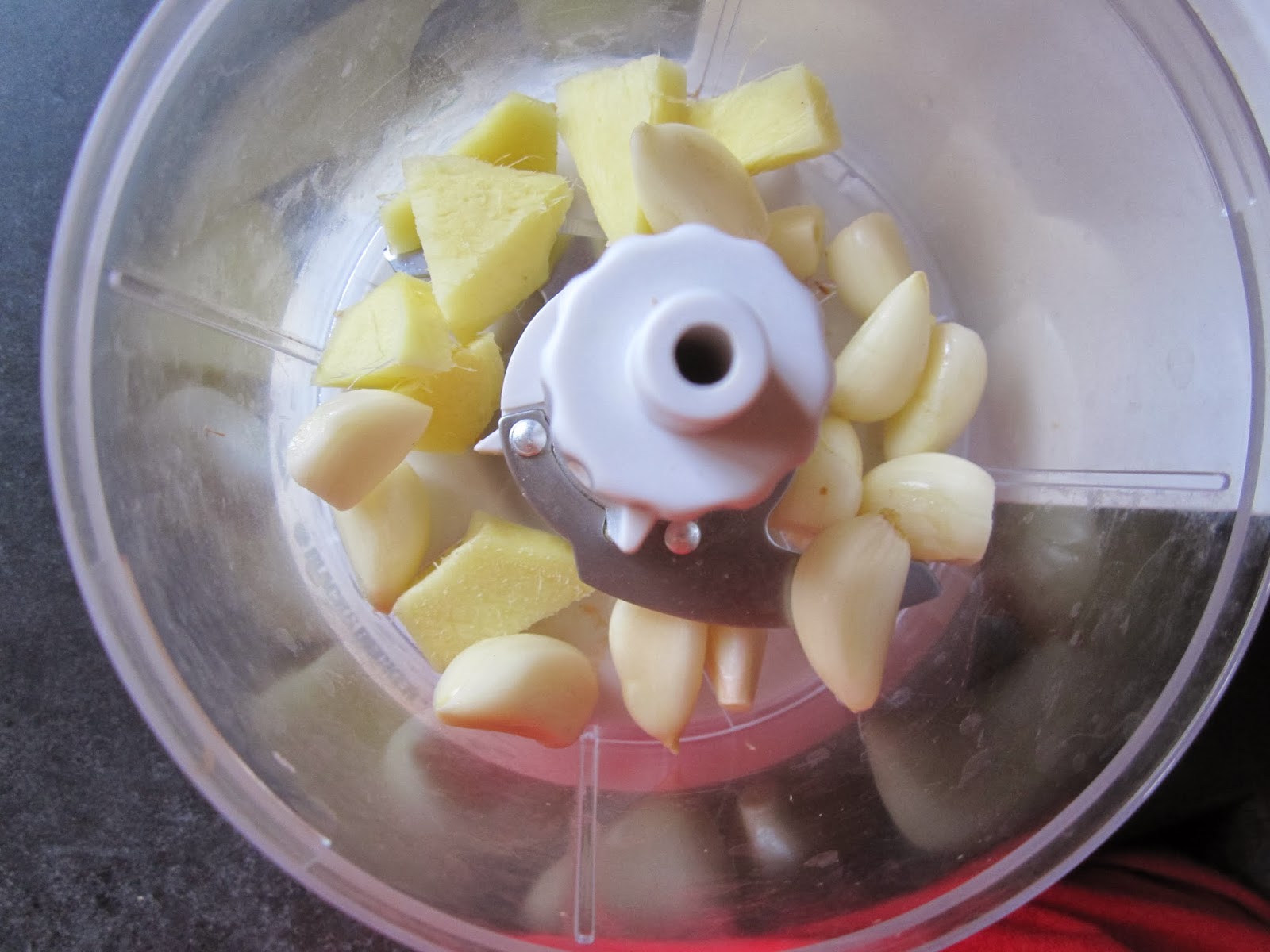 Put ginger and garlic in food processor and blend to a paste.  Set aside.  Set the oven to 325 degrees F.

Heat 1 Tbsp vegetable oil in a dutch oven pot (or other large pot that can go in the oven).  Brown the cubed lamb, 10-12 pieces at a time - do NOT crowd the lamb or it will boil rather than brown.  Set the browned lamb aside.


Into the remaining oil (and fat from the cubed lamb), add the first round of spices: cardamom, cloves, peppercorns and cinnamon sticks.  The cinnamon sticks will be removed just before serving but the others will soften and become edible.  Cook 2-3 minutes. 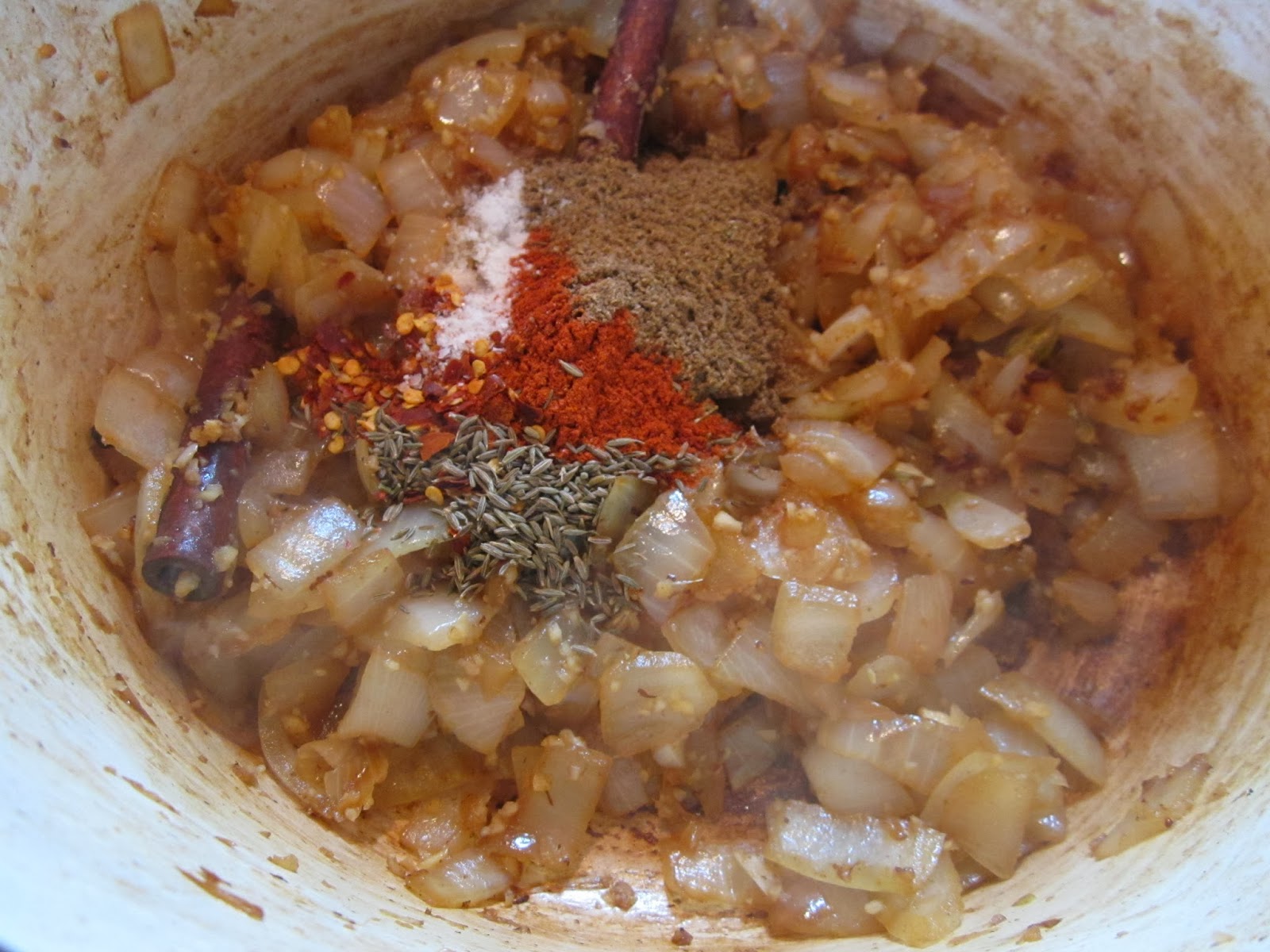 Add the chopped onions plus a pinch of salt.  Cook about 10 minutes, stirring constantly to pick up the bits of lamb left in the pan.  When the onion has softened, add the mince garlic and ginger and cook 2-3 minutes.

Add the remaining spices.  Stir into the onions and cook 2-3 minutes to allow the spices to toast and become fragrant.

Add the lamb back to the pan and cook 2-3 minutes, stirring continually to coat with the onion and spice mixture.


Add 1 Tbsp yogurt and stir to mix in.  Continue adding 1 Tbsp at a time, mixing well in between and scraping the bits of cooked lamb and onion from the bottom of the pan. 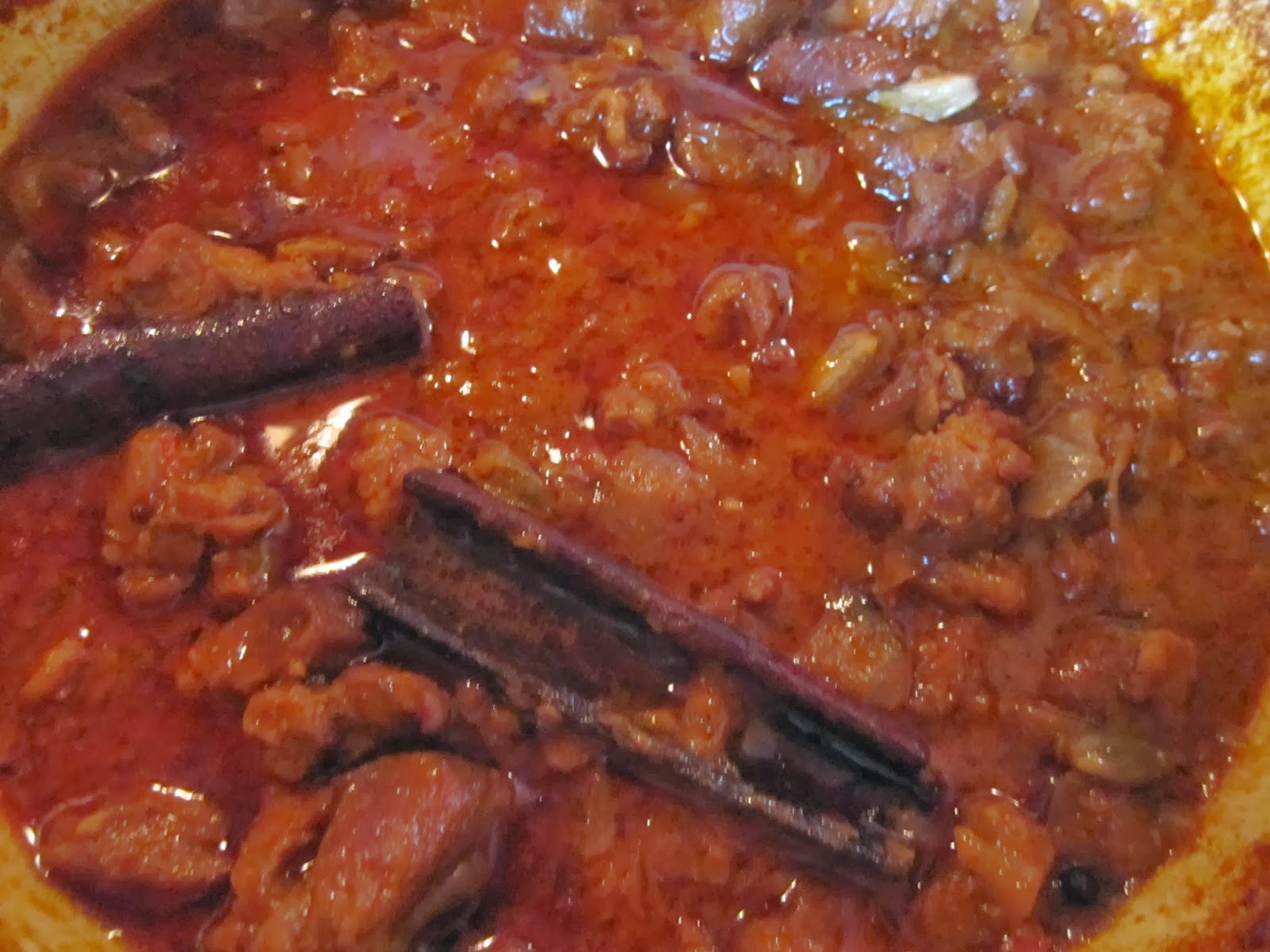 Add 1 cup water and bring to a boil.  Ensure all bits are scraped from the bottom of the pan then cover and cook in oven 1 1/2 - 2 hours until lamb is tender.

Depending on how well-trimmed the lamb is, there will likely be some fat on top.  Blot with a paper towel or if you have prepared it ahead of time, cool in the fridge and the fat will harden and can be easily removed before reheating to serve.

Garnish with cilantro and serve with rice, naan and some veg dishes (shown here with chana masala which I'll post soon). 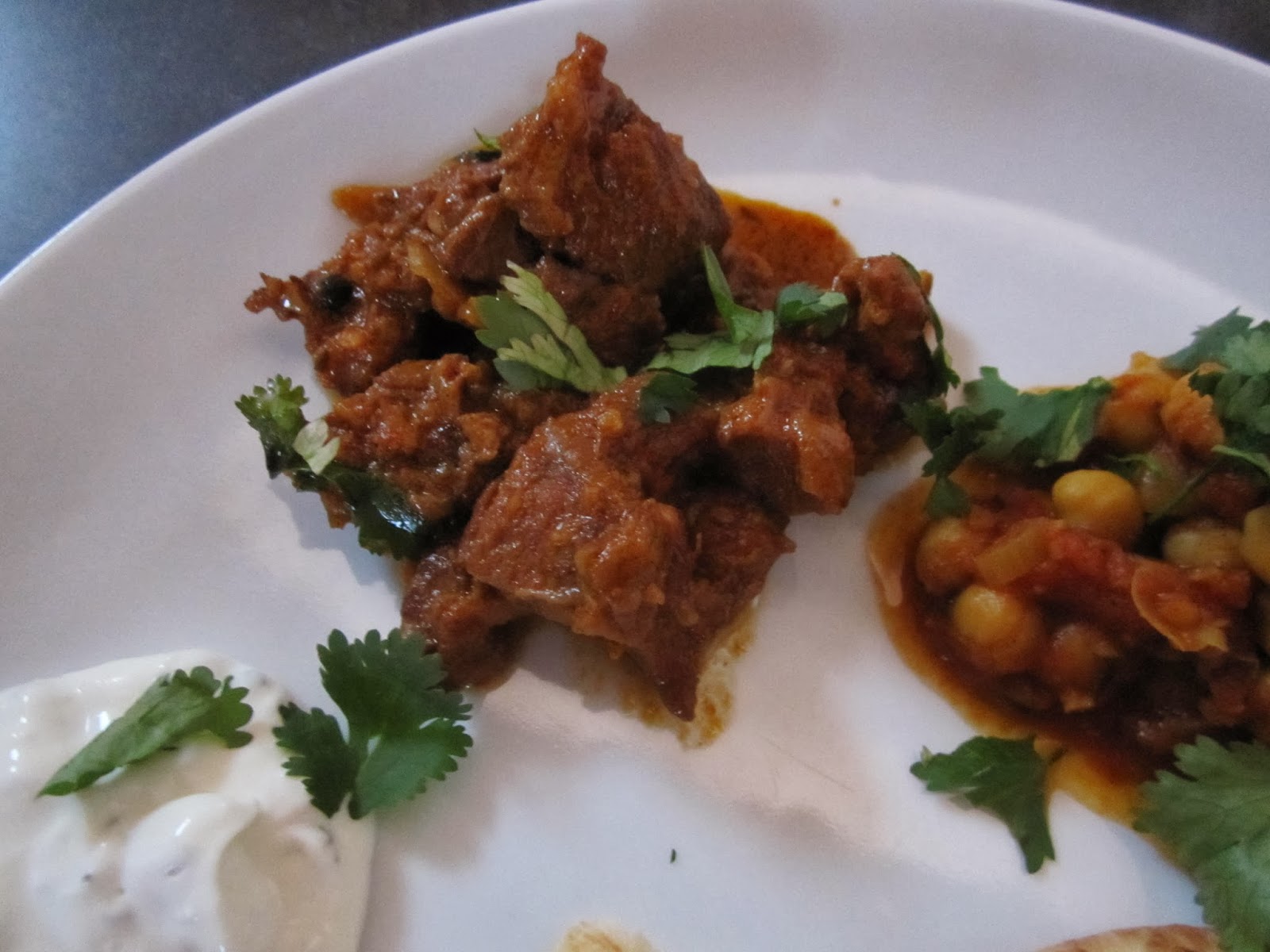