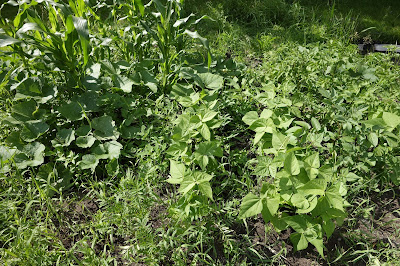 I tried this concept last year for the first time and it was a miserable failure.  But I believe it was more about the cool weather and the location rather than the particular combination of vegetable plants being grown together.  In fact, I’m having a difficult time with that location even this year so I’m not taking that failed attempt too personally.


Especially considering how pleased I am with this year’s progress so far.  This is probably my most advanced garden space in the yard (although with all of the rain and sunshine the past few weeks, many of my plants are looking pretty nice right now). 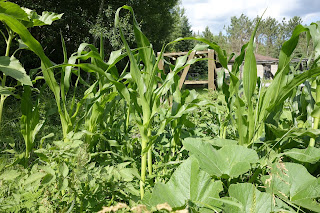 I planted golden bantam corn – this is the same corn I tried last year as I had some left.  I had also ordered another packet of corn (Paydirt from Vesey’s) new for this year but decided I didn’t have the space.  Because of the poor growth I had in 2014, I actually started the corn indoors (April 26 seeded) and transplanted it once the weather warmed up (I can't remember when). 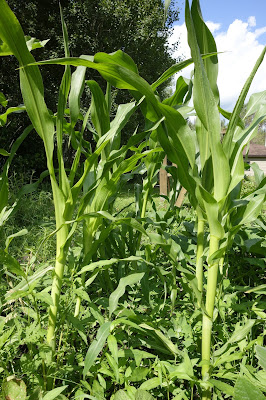 I noticed earlier last week that some of the corn was falling over – I assume it was due to the high winds we’ve had recently.  But I also had considered that possibly the squash wrapping around it might be pulling it over??    I straightened them up a bit and put more soil around the base and they seem to be standing better now.

And these here are the two Marina Di Chioggia squash plants that I purchased at a plant sale back in the spring.  These were in the ground early (around May 19th?) and survived the frost/freeze just a few days later as I had covered them with upside-down pots.  So they have a really good start on the growing season. 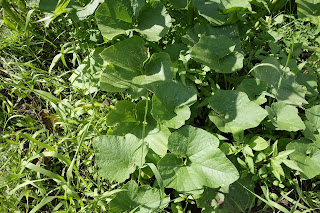 I also have several winter squash plants – and that’s all I can remember about them.  I’m pretty sure they are acorn or spaghetti squash but I can’t remember and don’t know enough about the leaves to guess at this point.  I have winter squash in various locations this year so I’ll just figure it out when they start to grow. 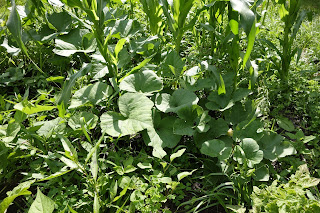 As for the third sister – beans – these are borlotti.  Definitely one of my favourite beans.  I also have beans in a few other spaces which I’ll post about separately.  Although I’ve put the three sisters (corn, squash, beans) into the same garden space, I can’t really call this a proper three sisters garden.  The intent of that garden style is for the plants to mingle and benefit from each other’s growth – for example, the beans are often pole bean style and would use the corn stalks as their support to grow vertically.  Because these beans are off to one side, I’m not really getting the benefit of planting them together. 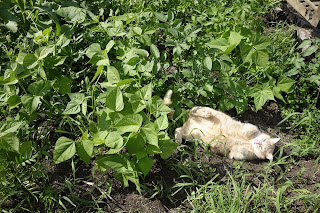 Borlotti are actually a bush bean, so the support is not necessary.  Mind you, they do get quite tall and I sometimes stake one or two of the plants if needed (this is only my 3rd year growing borlotti so still working out the best approach). 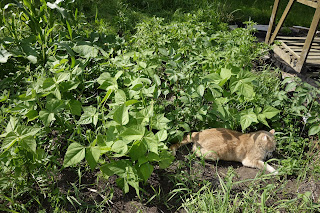 Sometimes a fourth sister is included in the mix as I’ve done here – the sunflower.  These are Kong sunflowers and are intended to get up to 12-14 feet tall.  I have also scattered these around the property but these two are definitely the best specimens so far – quite a bit thicker and taller than the others I have planted (they were started in the greenhouse). 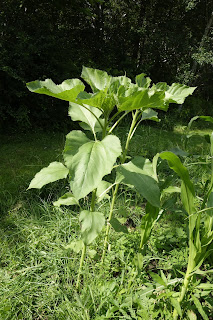 And I have a fifth sister – OK, now I’m just making stuff up, this is definitely not traditional!  But I do have a fifth crop here – volunteer potatoes.  This area was my potato patch last year and I rotate crops regularly to reduce pest infestation (in this case, the Colorado potato beetle).  I pulled out the volunteers (well, most of them) where they came up near the corn or squash, but I figured they would be okay coming up around the beans.

I’m keeping a close eye out for problems (and a little bit of finger-crossing) as it is still early days.  But results so far are promising!