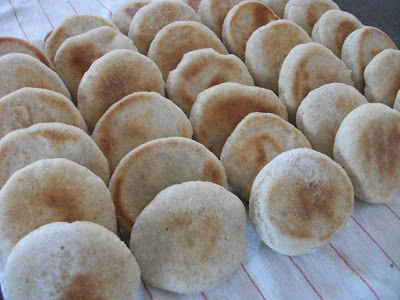 While updating notes in my "gardening book" (I keep notes on when, what and how I'm planting so I can learn from my mistakes year to year), I noticed a recipe I had developed a couple of years ago for sourdough buttermilk bread - no idea why I wrote it in that book.  So here is the recipe, but I've just modified the technique to make these english muffins instead as I need to refresh my supply.

If you have a good sourdough starter, you don't necessarily need to use the yeast in this recipe.  But for me, the sourdough is more about the flavour, and I prefer to remove the risk and just add in some yeast to be safe.

Stir in 3 cups bread flour (I already deviated from my recipe and used all-purpose here).  Cover and let sit overnight or at least a few hours.   This mixture is referred to as the sponge and is a technique often used in sourdough breads. 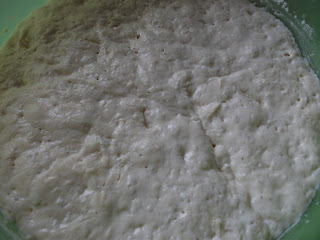 Add 1 1/2 cups flour (I used multigrain bread flour at this point but you can stick with regular bread flour) and 2 tsp salt.

Knead on floured surface, adding flour as required.   If you wanted to just make bread, here is where you'll just let it rise to double once, form into your loaf shapes, let rise again, then bake. 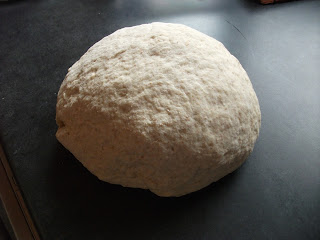 For english muffins, roll out the dough to about a 1/2 inch thickness.  Cut out rounds using a 3.5" biscuit cutter (I couldn't find one so used a Guinness glass which made them a bit smaller than commercial english muffins). 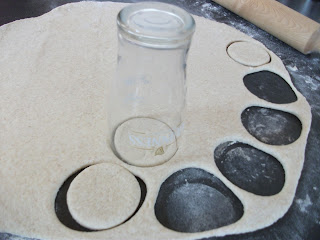 Cover with towel or pop into oven on proof setting and let rise about 45 minutes. 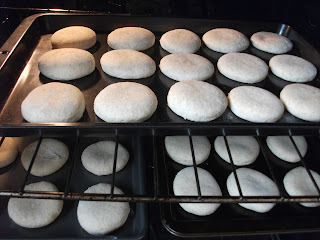 Tip:  If you move them to a pan for the rising, sprinkle the pan with a bit of cornmeal to keep from sticking.

Fry in a covered pan at a low temperature for about 5-7 minutes each side.  The pan can either be dry or have a small amount of butter. 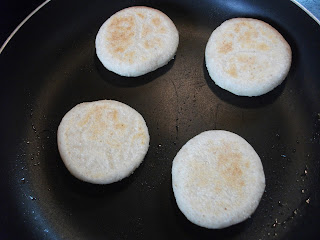 The nooks and crannies in the "crumb" occur naturally, but are enhanced if you use a fork to split the muffin apart. 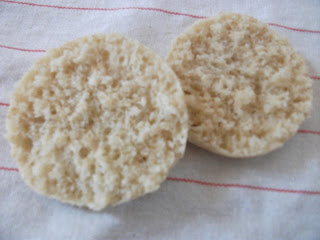 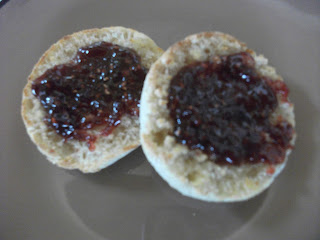 I kept a sourdough starter going for a couple of years but I neglected it during a move in 2011 and haven't had one since.  I would have preferred to get some of an existing starter but have been unable to track some down.  So I started my own batch again ... I took the really easy route and added some yeast to equal parts of water and flour.  Actually, that was the plan, but after I added the yeast to the water I realized I did not have enough flour.  So I added what little flour I had and waited until the next day when I picked up more at the store. About two hours after adding what I thought was the right amount of flour, I heard a minor "eruption" in the kitchen and discovered that I had added enough flour to make more of a "dough" which rose in the warm temperature of the kitchen and burst through the "coffee filter" lid I was using and onto the counter.

I made a few adjustments to the starter, and several days later, I have what appears to be a normal active sourdough starter. The starter is stored in a mason jar in the fridge - I use a coffee filter with holes poked into it as the lid, with a metal canning ring to hold it on.  This allows it to breathe a bit.  If I'm not using it for baking, I'll just remove a cup every week or two (I've gone as long as a month), replace with equal amounts of flour and water, then keep it at room temperature until it bubbles and back into the fridge.