When I used to make a lot of pickled peppers, I tried different kinds such as Lemongrass Pickled Peppers.  I don't make as many anymore; now I use a simple brine so that the peppers can be used in a variety of recipes or just nibbled on if you really like it spicy! 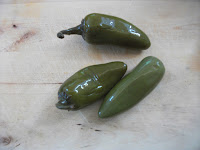 Some peppers from last year's batch were used in the Bacon Jalapeno Cornbread recipe I recently posted.


This brine recipe will be good for about 3-4 litres worth of pickled peppers, depending on how tightly they get packed in.  I keep the peppers whole, but also use this same recipe for sliced peppers.  And I generally use whatever I have on hand, usually a combination of jalapenos and Hungarian Hot Wax peppers (I poke a hole or make a small slice in whole peppers to avoid them bursting).  If you are short on hot peppers, you can slice up sweet peppers - the brine will eventually turn them hot as well.

Place all ingredients in a saucepan, bring to a boil then reduce heat.  Simmer for about 5 minutes.  Pour into jars filled with fresh chiles. Either process using a hot water bath method or allow to cool naturally then keep in the fridge.