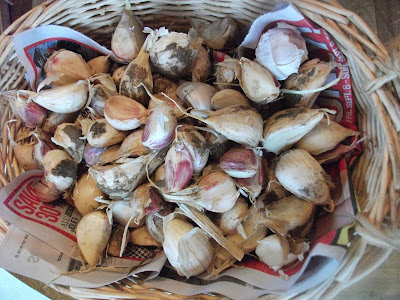 I decided to plant some garlic this past weekend; the weather was beautiful and I already had some that had been split up into individual cloves - nice big ones! 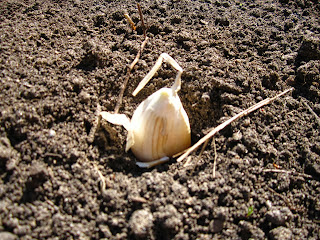 This might even be a bit early.  Any time until mid-November is usually okay; it is best to get the garlic planted a few weeks before the ground freezes.  This gives enough time to start forming some roots but not enough time to send shoots upwards (or at least not very big ones).  You want the garlic to have a bit of time to root in as the freezing soil can heave the cloves out of the ground if they have nothing to hold on to.

I generally plant them only about an inch or two below the surface.  I just kind of shove them into the dirt root-end first then shovel a bit of soil over top, so maybe two full inches below the soil. 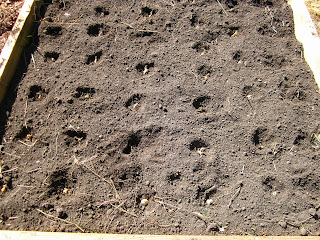 It was recently suggested to me that I put lots of mulch (hay in this case) over top and that's a particularly good idea for me as I plant them rather shallow.  I've read on some sites that they should be planted 3-4 inches deep. 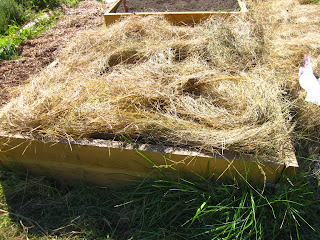 I was hoping to put in about 100 this year, but have only planted about 75-80 so far.  One raised garden got about 40, and another 40 went into a portion of the garden used this year for the pathetic onion crop (can you even call it a crop, when so few made it?). 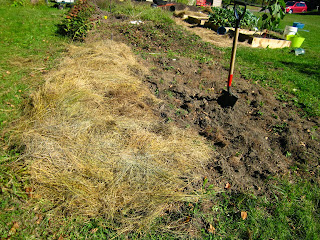 Even with the new hugel garden that will be available next year, I still feel like I don't have enough garden space for everything I want to grow!  Maybe I'll try some in containers in the greenhouse ... sigh.  Some of my greenhouse experiments did not do so well this season, so maybe I'll think about that a bit more.

Even with all the garden and yard maintenance left to do, I might just be able to get one more garden space set up and get a few more garlic in before the end of the season.  We'll see.