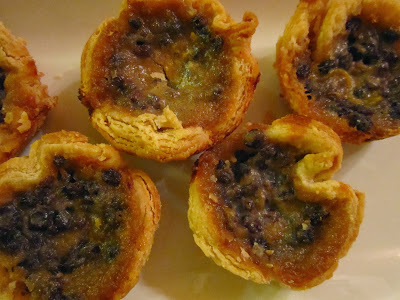 Here's another Christmas treat that we grew up on; the recipe was passed down from my Dad's mom to my mom who still makes it for the "kids" each season.  This has always been my favourite butter tart recipe, and boy there are so many varieties!  Especially so here in Eastern Canada where you will often find them made with maple syrup.  You would think I would prefer something with real maple syrup over corn syrup nowadays but it's really hard to give up the stuff you grew up with!  And these are super tasty, so why would I switch to anything else? 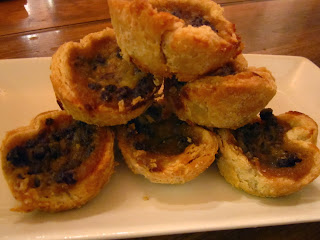 This version calls for either raisins or currants, but we've always used currants (at least I think so, that's certainly what I've been using).  And the original calls for margarine, but I always use butter so I've made that switch here (I mean come on, they are called butter tarts, not hydrogenated oil tarts).  As for the pastry, I just used the recipe from the side of the Tenderflake package; my mom uses the Crisco recipe.  Or just buy some ready-made tart shells - even easier!

The filling is enough for 12 3" tarts which should call for a basic one-crust pastry recipe.  The tart shells are not blind baked first.  I thought that was strange but it seems very common this way and the blind baking is not at all necessary. 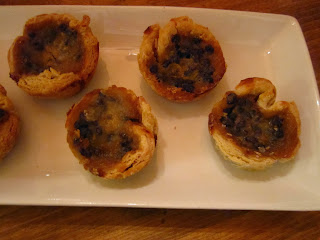 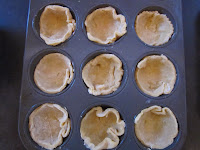 Prepare pastry, cut tart shells (a 4" round should be the right size) and place in a 12 tart/cupcake pan and chill in the fridge while preparing the filling.  I'm not that great at this, but they turned out OK (well, maybe not OK, but not too bad?).

Soak the currants in just enough hot water to cover them. 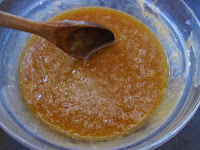 Melt the butter and add all remaining ingredients except the eggs and currants.  Make sure the mixture is cooled down, then add the 2 slightly beaten eggs and mix well. 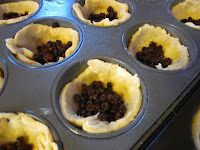 Put an equal amount of the now cooled currants into each tart shell; a little less than 1 Tbsp each should work out. 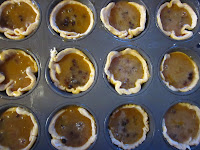 Then top with the filling (if the filling has been sitting for a bit, you may need to give it a quick stir again). 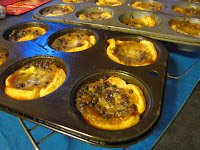 Bake for 15-20 minutes until the pastry has browned.  Leave in the pan until cooled before trying to remove (trust me on this one). 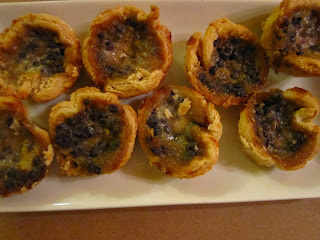 I recommend making a double batch as I always do ... they'll go quick!