Current State of the Brassicas 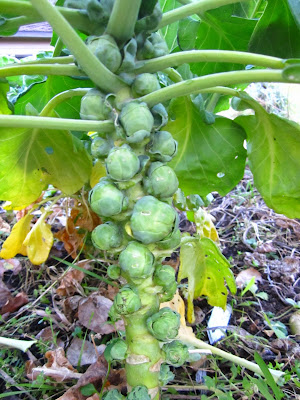 I am anxiously watching the weather forecast these days.  Yesterday was fabulous ... a high of 17 degrees C!  But we have already had several nights below zero in the past few weeks and similar lows expected in just a few days.

But I wait patiently for the brussels sprouts and cabbage to get a bit bigger before I harvest them.  I intentionally started them later than the previous year to avoid having them bolt in the summer heat - naturally it turned out to be a cool summer.  :)

The sprouts should be okay (I only have 4 plants) ... another week in the garden then they'll still get a bit bigger if I hang them for another week or so.  I don't imagine the savoy cabbage will get much bigger but the 4 plants I have should provide enough for a meal or two. 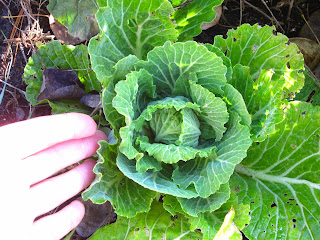 After Margaret showed her broccoli side shoots a couple of days ago, I thought I should take a look myself as I had not expected to have the time for any to grow this season.   Wouldn't you know it, there are side shoots on most of the plants! 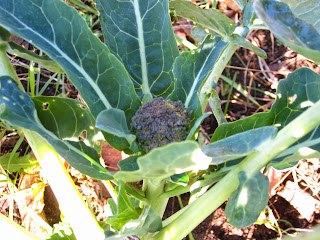 And it looks like I should still get a broccoli (or four), small as they may be - this one is only an inch or so across. 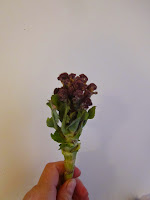 As for the cauliflower, not so much.  Second year in a row with no real heads to harvest (except for this teeny little purple one pulled a week ago).

Last year, the entire plants were duds.  This year, I have large plants (pic below) with plenty of leaf but no head (or maybe a little head wrapped in those inner little leaves).  I'll see if I can work out that problem before next year.  I know I had peas growing in that bed just before I put in the brussels sprouts and cauliflower and the brussels sprouts seem fine. I assume I have too much or too little of something ... 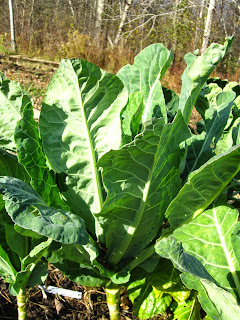