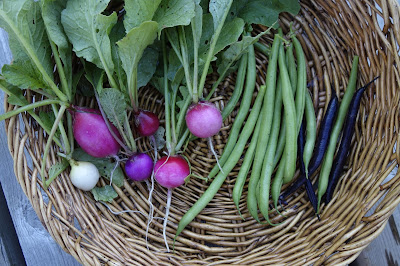 It's about that time of the year when we usually get our first frost in these parts - I've covered a few spaces the past two nights as the temperature got a little too close to freezing for my liking.  But it's warmed up a bit today.  I really hope the weather holds out a bit longer so I can harvest a few more beans (Royal Burgundy and Delinel) from my fall planting.  So far I've harvested just the small handful shown above along with some radishes.  The radishes were planted specifically so I could make my potato salad but the green onions haven't sized up yet and likely won't make it before the frost hits. I guess I'll pick some up at the farmer's market.

I was holding off on harvesting parsnips as I read somewhere that they taste better after a frost.  But some were getting pretty big so I pulled this bunch along with more Nantes carrots.  I really like the Nantes carrots and will grow them again next year for sure.  They grew much faster than other carrots I've grown and I like the taste. 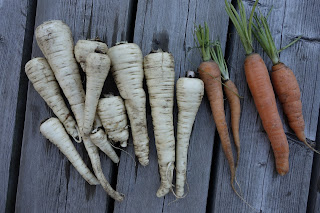 I also harvested the remaining cabbage.  I've had to peel away quite a few leaves to make sure there weren't any little slugs left.  After soaking the heads for a while, I still found a worm.  I was so paranoid about the one little head, I just cut it right open to check (guess I'll have to cook that very soon!). 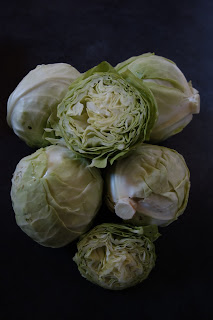 A previous harvest of cabbage was sauteed with leeks and bacon then stirred into some homemade mac and cheese.  Sooooo good!! 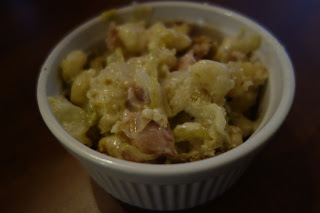 Thanks to Dave at Our Happy Acres for taking up the torch for Harvest Monday's so gardeners around the world can continue to share their goodies each week (and a few "baddies" now and then).