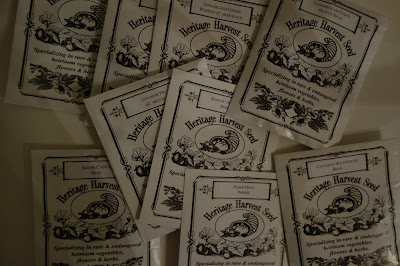 I'm quite excited about the seed order I received a week or two ago from Heritage Harvest Seed.  It is my first year ordering from this company, based in Carman Manitoba, that describes itself as "specializing in rare and endangered heirloom varieties of vegetables, flowers and herbs".  They have no GMOs, no hybrids and all seeds are untreated.

I found this seed company as a result of a specific search I was making ... "seeds cheese pumpkin canada".  And it was the first listing!  The search reference to Canada was, as mentioned in a previous post, because buying from the U.S. is pricey with the low Canadian dollar plus I also like to buy from climates that are more likely to be like mine.

I was looking for "cheese pumpkin" because I had read that C. moschata types were better at resisting the damage from bugs.  I also read that they are more tolerant of the type of weather I get here in the summer (hot and usually quite humid).  So that is exactly what I ordered, a cheese pumpkin. 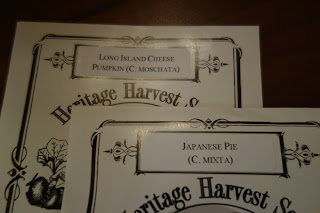 The Long Island Cheese Pumpkin gets its shape because it's shaped like a wheel of cheese (round but flattened).  I also bought seeds for the Japanese Pie pumpkin.  This is a cushaw style (also C. moschata).  The Japanese Pie dates back to 1884 (according to their pamphlet) and, not surprisingly, originated in Japan then introduced in this part of the world in Pennsylvania.

And while flipping through the catalogue, I saw these! 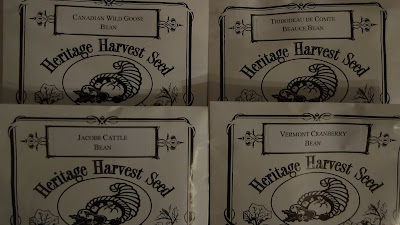 What a great selection of beans!  I had quite a time picking just four types, although I was able to reduce my selection by focusing on bush types as my preferred plant type to grow.  The photo is a bit dark so here are the ones that I ordered with more details from the pamphlet:

Jacob's Cattle: Another bean good for baking, white with purple splashes and dots.

Thibodeau De Comte Beauce: I've never been to Beauce County but I thought it would be fun to grow a bean from my neighbouring province of Quebec.  This is a snap pea with straight green pods splashed with purple.

Vermont Cranberry: These date to pre-1800's from New Englad area.  These can be grown as either a dry bean or shell bean, with seeds that are small and pink, with darker red stripes.

And then there were these ... 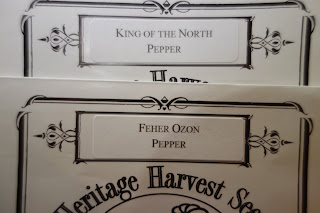 I bought the King of the North pepper seeds after growing them for the first time last year.  I did not have spectacular results but they were worth another try.  Those plants had been purchased at a plant sale so this year I'll start my own from seed.

And the Feher Ozon Pepper ... described as "one of the best paprika peppers available, originally from Hungary".  Dave at Our Happy Acres makes his own homemade paprika and both Michelle and SFG Dave also grow paprika type peppers.  I thought it would be fun to make some paprika spice myself if they grow well enough.

And I always love a freebie ... they threw in some seeds for Summer Savoury which I don't happen to have on the go.

I don't plan to go through all of my seed order in this much detail as most of it is "the usual".  But I'll likely outline at least one more of my seed orders as I have a few new things I'm trying out this year.

Despite the okay winter we've been having, I am still very much looking forward to spring weather!