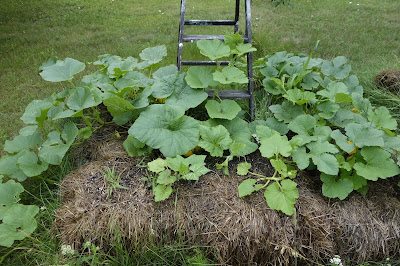 After a terrible infestation of squash bugs last year, I have moved the squash patch to the south side of the house (so opposite side) thinking I'd fool them and they wouldn't find me!  Well, things haven't been so bad with squash bugs but the cucumber beetles are still an issue.  Ah well ... I have had many mornings of searching for eggs on the underside of leaves and squishing what I could find and am doing so-so on keeping up with them.  I wanted to share a few photos of how they are looking at this stage. 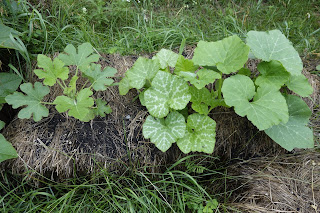 The bugs seem to focus in on the flowers and so I tend to ruin the flowers when I'm picking bugs.  That means that there are less flowers to be pollinated and form fruit.  At this point, there are very few squash forming but there is plenty of time left!


I don't entirely remember where I planted what, but the majority is winter squash with Tromboncino being the only summer squash.  Although I don't know which is which, the winter squash include at least one each of Japanese Pie, Long Island Cheese, Acorn, Butternut squash and some heirloom pumpkins. 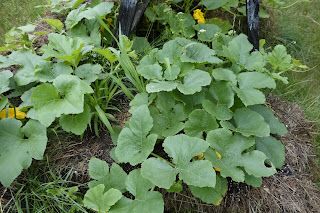 All were started from seed with one exception ... the Marina di Chioggia squash (shown below).  This was purchased at a plant sale and is more advanced than the others.  That is likely why most of the bugs are hanging around that one to the point that I've massacred many of the leaves and pulled off several flowers. 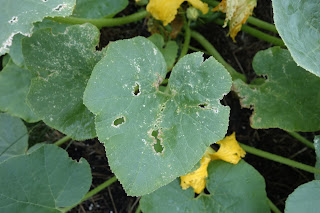 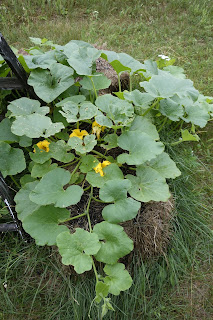 Some plants have gotten off to a slow start ... not sure that one on the left will make it?? 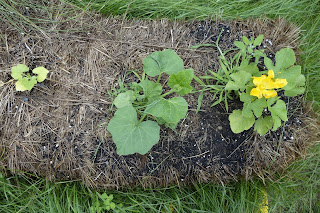 And one of the hay bales (hard to see, but the one on the right) is already collapsing so not sure if it wasn't as dense as the others or it is just composting at a faster rate. 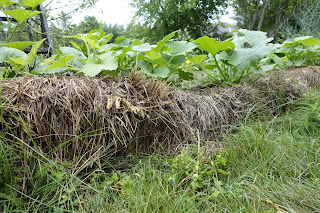 Considering I haven't paid a lot of attention to these plants lately, I am pretty happy with the results.  I didn't even bother preparing the bales (so didn't "condition" them) but just plopped the plants into a pile of soil on top of the bales.  Around the third week, I watered in some organic fertilizer.  All in all, I'm pretty happy with the current results but really looking forward to seeing some squash forming soon! 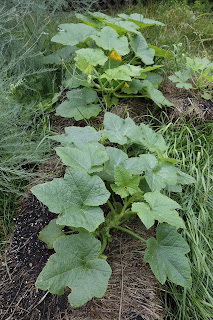