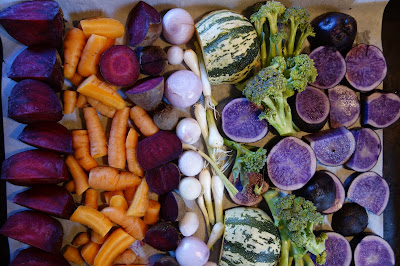 I will make this a short post as a quick update on what is happening in my garden this week as I am home briefly between trips.  But I still look forward to seeing what other gardeners are posting this week and will be popping over to Harvest Monday hosted by Our Happy Acres.

Most of the harvest is root veggies - some of which made up a delicious roasted veggie tray. A friend popped over to help me earlier in the week digging out a weeded over space that had contained collards (long gone), carrots and beets.  There were also some shallots that I had missed earlier and some volunteer potatoes found (also pictured is another Sweet Dumpling squash I found in the squash patch). 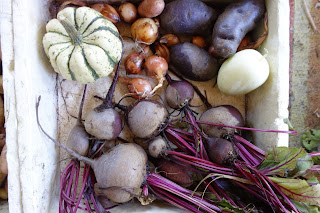 So who said I can't grow beets?!  Oh right, it was me.  Well, apparently leaving them to get weeded over seems to be my most successful approach yet. 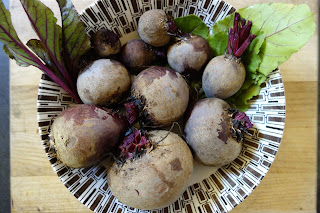 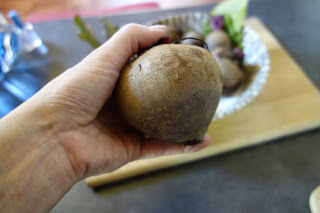 And most of the harvest from that garden were these Nantes carrots which should form about half of my crop for the year (the remainder of my carrots are from a Rainbow blend and are in another bed not yet harvested). 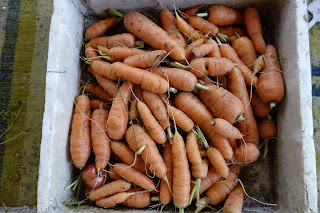 While my friend was digging up those root veggies, I was cleaning up the potato bed and potato bags.  The bags mostly held Pink Fir Apple fingerlings (shown below) and the potato bed had a small amount of Irish Cobbler or Linzer fingerlings, most of which had been harvested earlier. 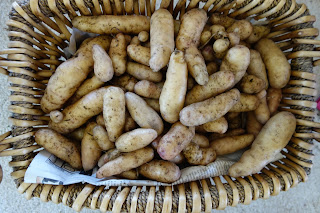 I still have tomatoes and peppers trickling in.   These green peppers were a result of accidentally pulling out a Xanthia plant from a hay bale.  I gave them away as I'm not a fan of green peppers. 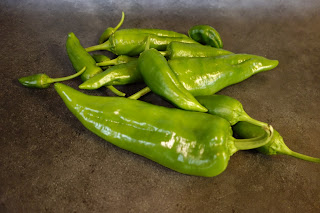 And I've found a few more large peppers in the hay bale plants.  Two King of the North and a Sweet Red Pimiento.  That whopper of a King of the North pepper is a little over half a pound - not heavy compared to some in the grocers, but certainly the largest I've ever grown. 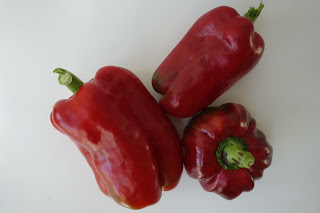 Another friend was kind enough to water while I was away several days and took some peppers and tomatoes with her.  These tomatoes were still left for harvesting when I returned.  The basket contains chocolate cherry tomatoes in various stages of ripeness, and the others are mixed heirloom varieties. 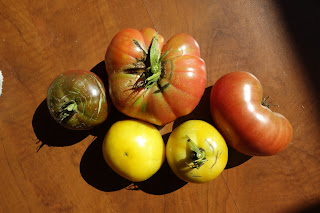 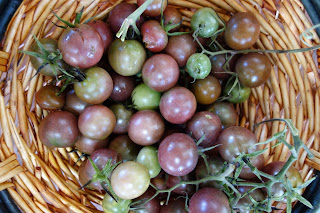 And a new harvest for the year as it was planted for a fall harvest - over a pound of Delinel beans. 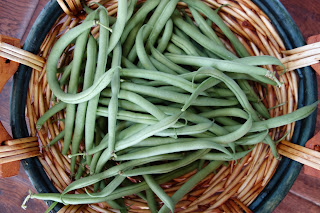 And finally (my "short" post was longer than expected just from the variety of harvests), two truly new harvests as these are a first ever for me.  My one, and unfortunately only, Tromboncino squash.  The plant seemed to have a particularly late start and has since succumbed to the squash bugs.  And I have FINALLY been successful in growing a melon - this is a Hale's Best Melon and is one of several with the rest still on the vine.  This is likely the largest of the bunch, weighing in just over 4 pounds. 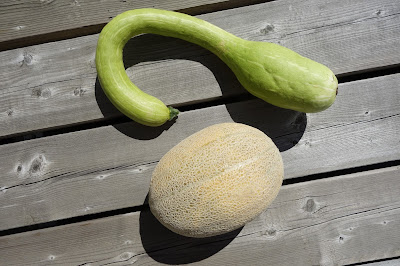 Hopefully after another trip this coming week I can come back to another harvest like this!