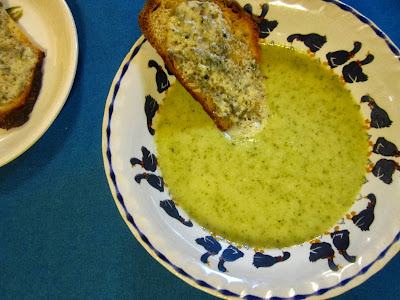 I decided that I would make a small pot of soup each week to keep on hand for lunches or a healthy snack; this is officially week two following last week's Ginger Carrot Soup with Coconut and Miso.  I wish I could say this was made with broccoli from my own garden but I had a failure earlier in the year and my fall crop is still struggling along after an early bout of worms.

I'll be the first to say how much I love a gooey, cheesy broccoli soup.  But it can be a little heavy.  This soup is made without any cheese, but gets a huge flavour boost from a small amount of blue cheese on toast to go with the soup. 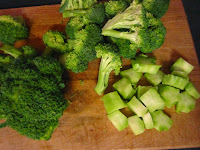 When chopping up the broccoli, don't waste the stems ... they might need to have the tough outer skin shaved down a bit but are tender underneath.

In a large saucepan, heat a small amount of olive oil and saute the onion and garlic.  After about 8-10 minutes, the onion will be softened (but don't allow it to brown).  Add broccoli, potato and stock.  Bring to boil, then simmer (covered) for about 10 minutes until broccoli and potato are tender (make sure potatoes are diced small so they cook as quickly as the broccoli).  Whiz with an immersion blender to puree.  Add evaporated milk for a bit of creaminess - I used less than a full can, probably about 1 cup.  Add S&P to taste and a pinch of freshly grated nutmeg.

For the toast, use thinly sliced pieces of any bread (I used a buttermilk round).  Spread a small amount of butter on top and toast lightly (or just toast dry if you prefer).  Then spread a thin layer of blue cheese on each piece and toast a second time to melt the cheese and crisp the toast. 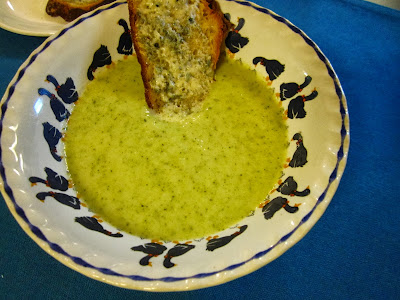