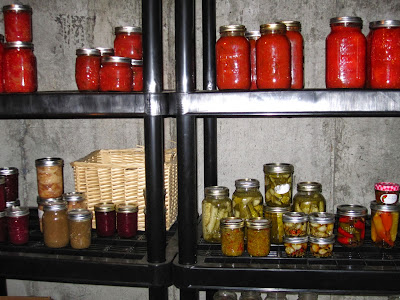 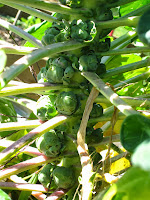 Aside from some Brussels Sprouts that have yet to mature, and spring onions and swiss chard that seem to want to grow forever, I have pretty much wrapped up the vegetable harvest for the year.

The last item was the potatoes which I finally got around to digging up last weekend.

I think I did okay for my first year at this property … but not great.  In the past, I’ve tended to rely on good old nature to make things happen.  And although I will never grow vegetables other than organically, I know there are plenty of methods I can follow or natural fertilizers I could be using.

I would certainly appreciate any useful tips for improving yield organically (in an Eastern Ontario environment) if anyone out there has good experience.  And I’ll be studying up on this throughout the winter.

Potatoes
The potato plants that I grew in containers in the greenhouse were semi-successful.  Because I started earlier in the greenhouse, I had an even earlier harvest of new potatoes – and I wasn’t expecting large potatoes in the containers since I harvested them early.  But I did not get very many in each container.  And I was definitely expecting the potatoes in the garden to be larger. 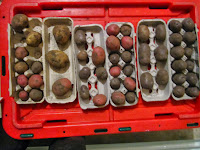 These, for example, were harvested just a few weeks ago so not exactly early.  This is about 6 pounds of already cured and very small Blue Russians and Red Chieftains.  Yes, they are sitting in egg cartons, that's how small they are!

And I have another pound or two of those plus some Yukon Gold still drying out. I also have a few pounds of fingerlings.  Fingerlings are absolutely my favourite potato.  And as much as I like eating little baby fingerlings, they do grow bigger and taste just as good.  However, these were only harvested last weekend and stayed fairly small.


So I have about 10 pounds of potatoes for winter storage and I recently gave away 3 pounds to a friend.  I’m sure I’ve eaten several pounds as well over the past few months.  But I had over 30 plants and should have had a much larger yield than this! 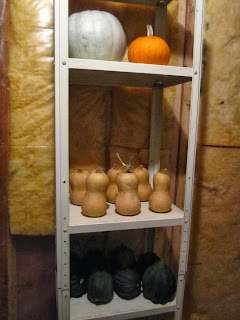 Winter Squash
As with the potatoes, I had a reasonable amount of winter squash to eat and give away with some left for storage that I can use throughout the winter.  But as with the potatoes, I only have this many because I had so many plants.  The fact is only about 6 pumpkins made it to harvest out of 12 plants (pathetic, right?).  Acorn squash was much more productive, but it still took 6 plants to get about 14 squash.  Butternut was kind of in between – 6 plants and 10 squash harvested.  Not even 2 per plant!  And really small too.

Other
Summer squash: 15 1-cup bags of grated zucchini in the freezer;
Borlotti Beans: Didn’t have many plants, so was thrilled just to have the 2 cups or so that are in the freezer;
Hot Peppers: I have a few dozen in various stages of drying.  Most were used fresh or pickled;
Okra: Didn’t grow enough to eat but grew them to produce more seeds for next year;
Onions: Complete failure, didn’t even have any to eat (aside from a handful of scraggly looking things);
Strawberries: Several pounds of frozen berries bagged up.

Preserves
I canned various fruits and vegetables over the past month couple of months.  I wish I'd had more cucumbers for pickling and the amount of salsa I made won't last a few months let alone to next year's harvest.  But overall I'm pretty happy with what I accomplished. 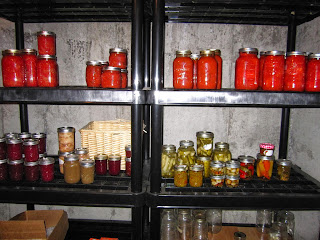