This is part three of my posts about dealing with the wet areas of my property.  Due to low lying ground, a good chunk of the north end is very soggy in the spring and right into June.  Ugh.  Then the little lakes start forming again in the fall depending on the rains.  Ugh again.  The picture above was taken in July; a nice dry month (and before the greenhouse disaster)!

My first post on this topic explained my disappointment in realizing that I would not be able to plant any of the planned perennials (fruit bushes, asparagus, rhubarb) in that area as their roots would get (and stay) far too damp in the spring.

This was the worst spot in April (just behind where the greenhouse is in the picture above): 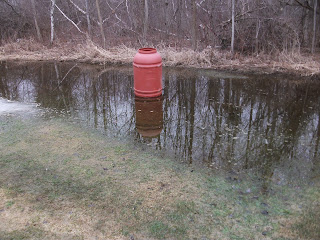 Here are my pumpkin seedlings in May on the edge of that same area (I was able to successfully transplant some after another heavy rain, but several died):

The second post explored various options including raised gardens, annual-only plantings and a few other methods for making use of the space.

Although this is titled "The Solution" it is by no means final.  The transformation of the property into what I want it to be will likely take many years.  It will take a while partly due to effort and dollars - I can only do so much each year.  But it is also because my vision will change often; hopefully I won't ever stop dreaming of new ideas and so I expect it will be an ongoing project for years to come.

But ... what have I done so far to address the watery trouble?  Nothing in terms of drainage, that's for sure.  It's all low ground around here, so not sure how to drain it away without spending lots of bucks??  If anyone has suggestions, I'm all ears.

In the meantime, I have done the following:

1) Built Raised Gardens (right side of photo above and one of them pictured to the right): This allows me to get plants started in May and early June without worrying about drenching their roots (or over-soaking the seeds).

2) Hay Bale Gardening (see the big zucchini plants on the left side of the picture above?):  Again, this gets things up off the ground a bit.

3) Vertical Gardening (far right in the back in the picture above):  Well, my first attempt wasn't super successful but I've got the concept right and just need to work out some bugs. 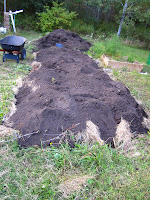 4) Hugel Garden (picture to the right): Because the base of the garden is logs and other yard debris, this is another type of "raised garden".  At least for the first year or so until everything starts to break down.

And where that soggy pumpkin plant was in May?  A few feet away on a slightly higher spot, I've dug another new garden: 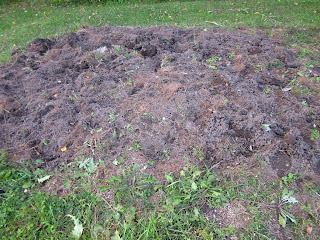 As for the options I was researching in the second post, there are two that I have not covered off.  One was "storage" - if I can't use the space, I might as well store stuff there.  Well, I had a big load of dirt stored in one area, but I managed to use almost all of it for new gardens.

And hardy perennials that are suited for that type of wet soil?  Still working on that.  I did save some seeds from milkweed plants growing in an equally wet area elsewhere on the property.  Has anyone tried growing milkweed from seeds??   Your advice would be appreciated.  Otherwise, I'll keep working on this option.

After yesterday's snowfall (as light as it was), the season is definitely over for me here, but I'll have plenty of fun over the winter thinking of new garden designs and layouts.

In fact, I have a good idea of what I want it to look like.  Just like "Sue's Garden Journal" blog pics - see this link for a pretty awesome setup.  I'm very envious ...