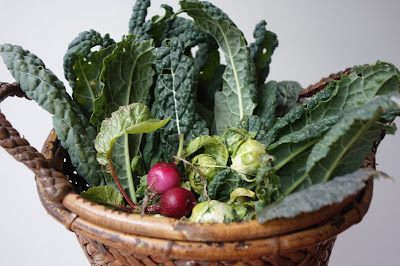 Although I will continue to check in throughout the winter with the Harvest Monday contributions at Our Happy Acres, my harvests are quickly coming to an end.  I might have something next week, but there isn't much left.  Luckily Harvest Monday's are about all things related to harvests ... including what we do with them!  It's been a while since I posted a recipe but managed to squeak one in yesterday as I sat inside watching the windstorm (remnants of Hurricane Patricia). 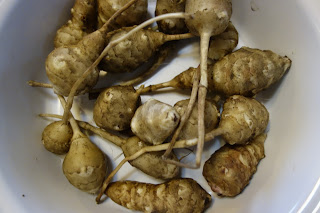 As it happens, even as my harvests are coming to a close, I have managed to come up with two newcomers!  The first new crop this year are Jerusalem Artichokes.  I had planted them in the spring of 2013, my first year in this location.  Having had experience with them in the past, I am well aware of their invasive nature.  However, they don't seem to be growing at the rate I had expected them to.  There are some pros and cons to that.  Well, one pro and two cons.

Pro:  I'm not as worried now about an uncontrollable invasion that would eventually spread into my neighbour's yard.

Con: (1) They grow so poorly in this location that they never seem to flower and (2) the tubers are very small.

Assuming the small size doesn't impact the flavour/texture too much, I believe the pro outweighs the cons and I will continue in the current location. 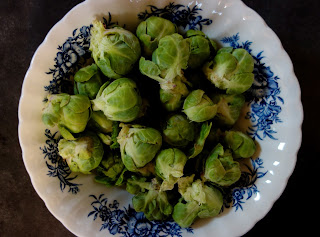 My second new crop ... Brussels sprouts!  Oh my, they sure are a challenge to grow.  Last Monday, I announced my intent to give up on growing cauliflower (well, unless I have some seeds left, but not buying anymore!) and I believe I will officially give up on the sprouts as well (again, unless I have some seeds left).  The plant that produced these minuscule sprouts was started from seed in late March and planted outside in mid-May.  After all this time, these are the largest of the sprouts on the plant (that's just a regular soup bowl, so the largest is about 1.5-2 cm diameter).  Argghh!  I started to harvest from the bottom up and went less than halfway so there are still some left.  But they are so small, I expect not to harvest much else ... although there is a bit of a warm spell this coming week so you never know!

And my only other harvest this week are shown in the main photo (along with the sprouts) ... Tuscan Kale and two radish!!

I've almost managed to put everything away in preparation for winter ... a few more pots, garden tools, etc. here and there to put away.  Unfortunately, I still have a massive pile of soil in the driveway but my new snowplow guy doesn't seem overly worried.

Looking forward to seeing the other Harvest Monday contributions at this time of the year.