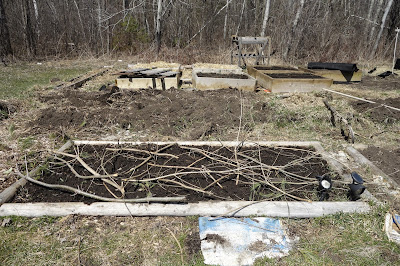 As usual, we've gone from piles of snow to lots of heat in just one week.  It's been quite hot the past two days and I've taken advantage of the nice weather to get some of the garden spaces ready for use.  I've moved the raised beds around a bit as some were getting a lot of grass growing in and around them.  The frames were moved onto an area with no grass and filled with fresh hay, compost and topsoil.  The space where the frames used to be will be turned over and just used as-is (so in-ground garden vs. raised bed).  This activity is also increasing the overall square footage I will have available.

The old hay bales were broken down and replaced with fresh bales. 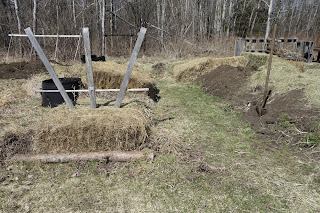 This particular set up of bales below is new on the south end of my house.  I'll use this for most of the cucurbits.  I had a terrible bout of squash bugs and cucumber beetles last year and I've decided to start off this year in a new location.  I'm pretty sure it won't work, but I'm kind of hoping any bugs that overwintered don't find their way to the new space. 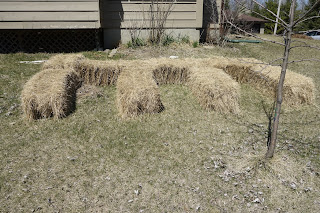 And I've managed to get some seeds sowed as well.  Here is what I planted this weekend:

I expect to sow more beets and carrots over the next month or so to keep them coming all season.  The daikon radish and mustard seeds were an impulse buy last week.  The seeds come from Tourne-Sol, a Quebec-based co-operative farm.  I bought them at an event sponsored by the Canadian Organic Growers association along with the Collards seeds (from The Cottage Gardener).

I have several weeks to go before the average last frost date has passed but everything I've planted so far should be able to handle some light frosts.  I won't be taking chances with the more delicate plants as I lost quite a few last year after getting excited by a bout of warm weather in May.

I'm linking up with Our Happy Acres as part of the Harvest Monday submissions.  Pop on over to see what other gardeners have on the go this week!