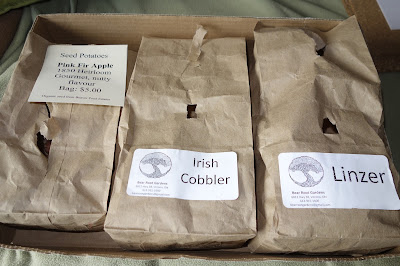 Well, there is one thing that I seem to be consistent with - when I start to chit the seed potatoes.  It was almost this same weekend last year when I brought out the leftover potatoes from my cold room to start preparing them for planting (although many had started to sprout even in the dark, cold store room so not much prep required!).

This year I had to buy some as I had none left from my own harvest.  Plus ... I really wanted to try some of those Linzer potatoes that Margaret grew last year.  I had planned on ordering from the same supplier, but ran across several folks selling seed potatoes at a Seedy Saturday in Ottawa (the same one where I found the sweet potatoes) and saw some Linzer's available.

I'm leaving the potatoes in their bags to keep them in order and they have already started to sprout a bit so no need to do anything else for now.  But so far, here's what I'll plant (some time in May most likely). 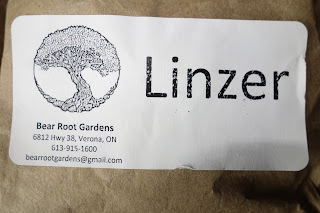 Two varieties are from Bear Root Gardens, including the Linzer fingerlings which are new to me this year.  I love fingerling style potatoes and these are considered an early maturing variety. 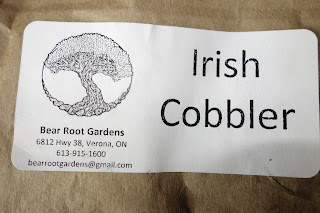 Irish Cobbler is a regular for me, another white skinned potato, also early maturing. 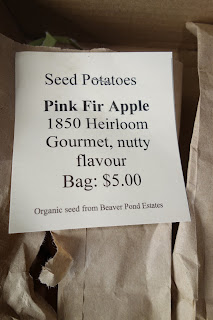 And this last variety is new to me this year as well - Pink Fir Apple.  It comes from Beaver Pond Estates, not far from where I used to live in Lanark County.  As you can see from the label, it is an heirloom potato, also fingerling style.  It is generally described as light-pink skinned and knobby - should be interesting!  From what I've read, it is common in the UK but just starting to become known in North America (although I'm betting most keen gardeners have known about them for a while and they just aren't mainstream yet).

And I might grab some more potatoes from the local store as I didn't manage to get any red skinned (so most likely Red Chieftain, a regular for me) and sometimes it's just nice to have some different colours on your plate!

Any new potatoes in your garden plans this year?