If you read my previous post on growing sweet potatoes, you will know that this was not my original plan.  Mostly because they seem very fussy to me.  But maybe not so much ... I've spent several hours earlier today transplanting tomatoes, peppers and such into pots (to be shared in another post) and for the second stage of these sweet potatoes, well, I kinda just popped the slips into another jar.

Quite a bit less fussy than other plants now that I think about.  IF I've done this right, that is.  I'm relying on youtube videos, etc. to figure out what to do here as it is not very intuitive to me. 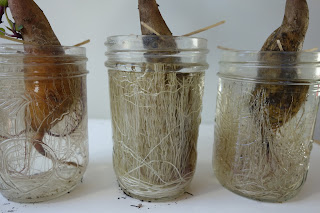 The roots of the sweet potatoes (or at least that middle one) were root-bound. 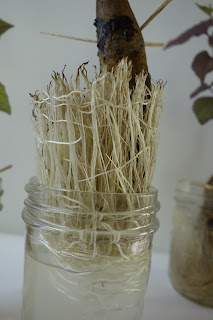 Maybe I should have used larger jars but the sweet potatoes themselves were so small, I just went with the smaller ones (250 ml).  And they were constantly needing more water - it seems the roots were very thirsty! 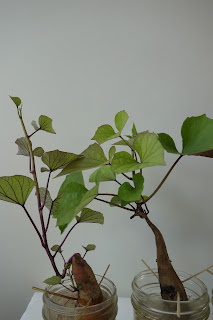 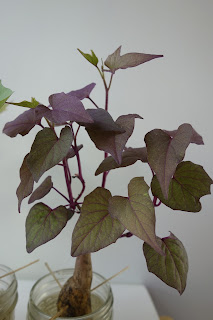 So even though the slips were not as large as some I've seen in the tutorials I've watched, I felt it was time to move to the next stage - which means the "slips" or sprouts are to be plucked from the potato and placed themselves into a jar of water (or wet soil) so they will themselves begin to grow roots.  It is these rooted slips that eventually get planted outside in the garden.  This is the part I was unsure of ... did I pick them at the right spot?  It seemed to me they were all attached to the potato from the same spot, so I really only ended up with one slip per potato - not sure that is the way it works? 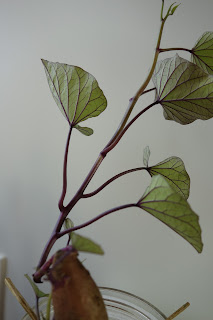 Here they are after placing the slips into their own jars.  I have kept the sweet potatoes in water (most of them put into larger jars to accommodate the growing roots) in the hopes more slips will grow - but depending on how long it takes, I'm not sure there will be sufficient time to grow more large enough for planting in June. 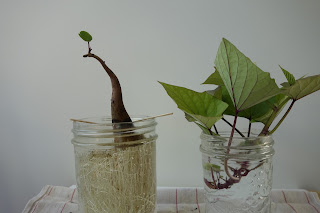 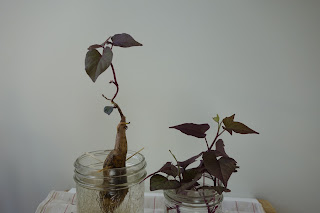 These last ones have purple leaves while the first two are predominantly green.  I was told they were either Georgia Jet or some offshoot so I don't anticipate the potatoes themselves to be any different.

It's a bit late to ask for advice on this stage, but if anyone has thoughts on something I might not be doing correctly, please let me know in the comments ... I've come this far, so I want to be sure I am doing it right!