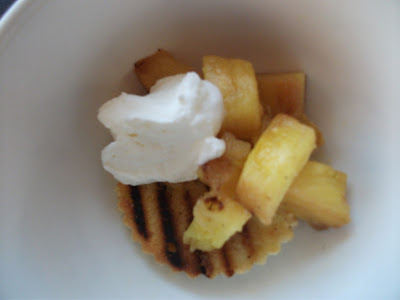 Windy, cloudy days are made for baking!  I have been planning to make pound cake and today was a good opportunity.  My main intent is to freeze it for use in a trifle this summer.  But it's hard not to have a nibble while it's fresh!  I was first introduced to this particular grilled combination a few years back at a friend's cottage.

When ready to serve, just grill the pineapple spears and slices of pound cake in a grill pan or, even better, on the BBQ.  I brushed the grill with butter first. 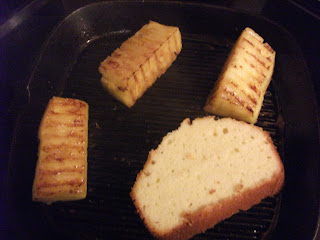 Since I don't make this cake often, I needed a recipe.  I turned to my old standby, Julia Child, from Mastering the Art of French Cooking (Le Quatre Quarts or "4 quarters", based on the tradition of making the cake with equal proportions of each ingredient, more specifically, 1 pound of each ingredient).  Modern versions have been modified.

I have finally picked up a new kitchen scale, so I've used the weight measurements rather than those for volume in the recipe where indicated. Surprisingly, she isn't consistent in this recipe, and in some cases, only a volume was identified.  The only modification I made was to double the recipe (knowing Julia's penchant for perfecting amounts and techniques, this is probably not something she would approve of). 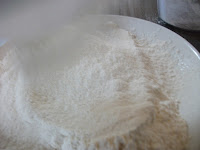 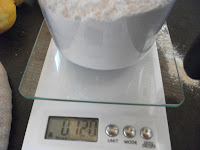 *Oops, I lied, there was one other modification.  Since I didn't have cake flour, I did the following: before weighing, I added 4 Tbsp cornstarch to the container, then added all-purpose flour to the weight required.  I sifted the flour several times to accommodate for the texture difference.

Whip the butter until it is a "mayonnaise-like cream" - this is meant to create enough body so that "it remains in suspension throughout the mixture rather than sinking to the bottom of the plan like melted butter".

In a separate bowl, blend eggs, sugar and lemon zest for a minute at low speed, then increase to high speed and beat for 4-5 minutes, or until mixture is pale and fluffy, and has doubled in volume.  Reduce back to low, and immediately begin to add the flour - this should be done fairly quickly.

And finally, remove the butter from its bowl and incorporate into this egg mixture; again, she suggests this should be done quickly - no more than 15-20 seconds.

Spread batter into 2 small, loaf pans that have been buttered and floured.  Any style pan will work; the recipe indicates a round 4-cup cake pan for the original amounts (so 2 in this case).

Bake at 350 for about 40 minutes, or until a toothpick inserted in the middle comes out clean.  Let cool before removing from pan. 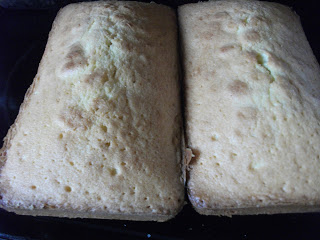