Today is my last day of holidays, and my first two days back at work are in Toronto - leaving on the 6am flight Tuesday morning. I will be moving most of my plants from the solarium into a back room; although Sugar Ray has been really good about not getting into the plants (except on a couple of occasions), I just can't be sure how he'll react to that much time alone.  A friend is popping in Tuesday after work to check on him, but he will still have a full 24 hours on his own.  I'd rather take a chance on the plants being without sufficient sunlight for that time, than risk full destruction!

I have also decided to put two of my healthiest plants (one Hungarian Hot Wax pepper and one San Marzano tomato) out in the greenhouse for the two days to see how it goes. The nights are still going just below zero, but I am expecting the greenhouse to be a few degrees warmer, in which case, they should be fine (tomato is a bit wilted in this picture, it's just getting used to its new home in the grow bag). 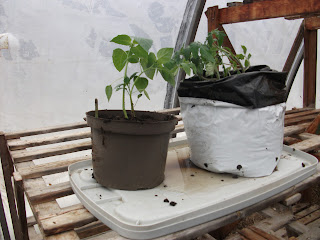 And I'm still working on the raised garden setup in the greenhouse - it won't take more than a few minutes to get the rest of the logs needed, I've just been taking my time.  And I've moved some shelving around to make some floor space for tomatoes.  I never thought I would complain about having too many shelves and tables in the greenhouse, but there is actually very little floor space.  And tomatoes are much too heavy to sit on tables.  So I'm slowly reorganizing to make the necessary space. 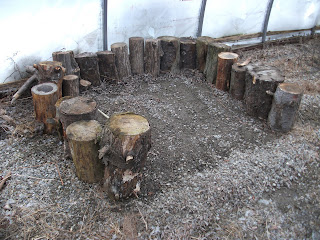 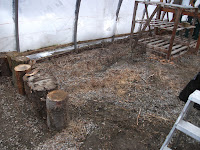 While thinking of getting plants into the greenhouse, I checked my outdoor water spigots yesterday and discovered a problem (well, actually a friend helping me out discovered the problem).   There are two spigots, connected by the same main pipe. One of them has come apart at the joint, and needs to be soldered.  So I can't really use either of them, without water pouring out of the one open pipe end. 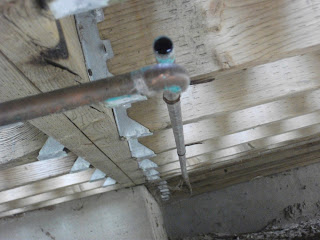 As a result, I figured I should take advantage of the slight flooding in my yard and collect some rainwater.  I pulled out one of my rain barrels and have been pouring buckets of water into it to be sure I have accessible water until such time that I can get the pipes fixed (not a big deal, but I'll need a day at home, and since I just finished a week of holidays, it might be a while!). 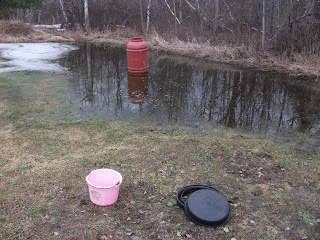 When dealing with the plant-cat-safety issue, I decided to put the tomatoes and peppers into the back room.  I think the greenhouse setup is safe enough to leave what's left (with a few chairs lodged up against it to make sure it can't tip over). 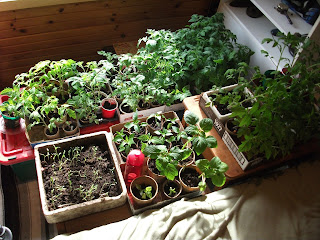 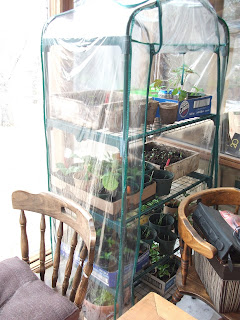 I gave all of the plants a good watering with 5-1-1 fish emulsion fertilizer, which I've been using once a week on plants that have been transplanted at least once into potting soil.  While watering, I did a count.  I counted only containers.  Against advice of much better gardeners than I am, I neglected to snip off the smaller plants in cases where more than one seedling came up.  I've always managed well enough to split them during the final transplant, so I'll just see how that goes this year.  So in some cases, I have many more plants than indicated by the container count.  This should be plenty for me, my friend for whom I'm supplying seedlings (see Black Walnut post), and still enough for a few giveaways to other gardener friends that might be in short supply. 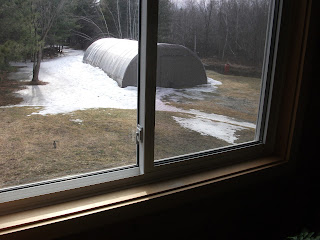 The tomatoes/peppers are in the west facing guest room, with the greenhouse seen out the window. 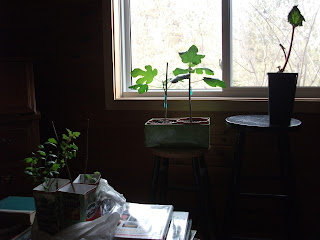 The east facing master bedroom is also hosting a few items: the fig plants, rhubarb, raspberry and blueberry canes and some potatoes that are "chitting" (Russian Blue in the box and fingerlings in the bag). 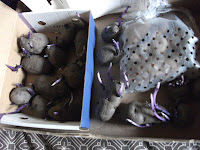 Fingers crossed that everything is well when I return Wednesday evening ...