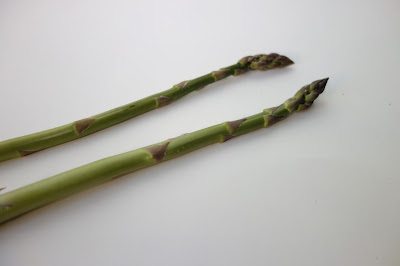 If you love asparagus as much as I do, you might be able to relate to the fact that I'm posting about harvesting two, yes just two, spears of asparagus from my garden.  But it's very exciting for me!

I have about a dozen other spears on the way but these first two had a head start and I feared they would begin to fern out - LOL, no idea how to refer to this stage ("flowering"?).  Anyway, I didn't want them to mature into the next stage where they become fern fronds.  Mind you, even though this is now my fourth season and I should be able to harvest steadily throughout the season, I still think I'll avoid taking too many in the first 6-8 weeks to allow the ferns to grow and replenish the nutrients for next year's production.

When I harvested them, I grabbed a knife and cut the spears just above the soil.  As I was cutting the second one, I suddenly had this realization that I have always snapped the asparagus when harvesting and why was I using a knife?

There is a similar question when preparing asparagus to eat ... I generally snap the asparagus which (according to literature and my general experience) naturally breaks at the point where the woody point ends and the more tender portion starts.  Many cooks choose to cut the asparagus rather than snapping (on rare occasions when I am desperate to save as much asparagus as possible, I'll use a peeler to remove the tough parts).

And by the way, I ate the spears fresh.  They tasted like spring.