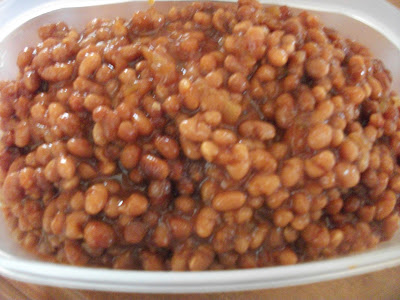 I have tried many times over the years to make a good batch of baked beans.  The flavour was never the problem, it was the texture.  They always came out a bit on the tough side.  There are a lot of theories about when to add salt or vinegar (supposedly it can make beans tough if added too soon), but those subjects are still much debated.  The main cause, in my opinion, is the amount of cooking required for the beans before popping them into a slow cooker.

All recipes, from what I've seen, require pre-soaking of the beans.  Makes sense - they absorb quite a bit of water just soaking in room temperature water.  But so many recipes call for a "simmering" of the beans - here lies my problem.  It does not seem to matter if I simmer them (so bring to a boil, then drop to a simmer) for 1 or 2 hours, they always end up slightly undercooked.  Even if I cook for 6 hours, 8 hours, 10 hours, add more liquid ... they never seem to fully cook and seem tough.  It seems to be that initial cooking that makes the difference.

The method I use here came about by accident ... just to be sure, I made a second batch later that same week (they freeze very well!).  Essentially, I put the beans in a pot preparing to simmer them and had turned the heat on high.  Then I started doing something (OK, to be honest, I was watching Star Trek: TNG on Netflix) and forgot them.  I kept hearing a weird sound but couldn't figure out what it was.  Well, it turns out, it was a pot of beans cooking at a rapid boil - I estimate about 20-25 minutes.  And only then did I reduce the water to a simmer. 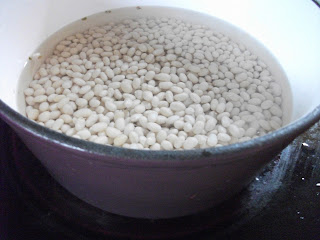 The only other comment I want to make about this recipe is the lack of pork.  Although my canned bean preference is always the plain and simple beans without pork (probably just habit after years of being a vegetarian), I had fully intended to add chopped bacon pieces - again, I was distracted by Star Trek and simply forgot. Turned out to be one of those good mistakes ...

Soak beans in a bowl overnight or at least 6 hours; use enough water to cover the beans by a few inches and add water as needed.  After soaking, put beans and "soaking" water into a large pot with enough water to cover the beans by approximately 1 inch (add water if needed).  Bring water to a boil.  Boil rapidly for a full 20 minutes.  Remove scum from the top and reduce water to a steady simmer.  Cook for another hour and a half. 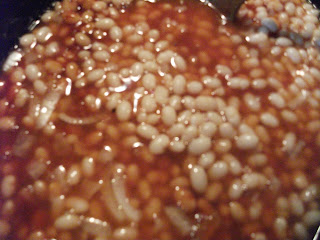 In the meantime, mix the sauce: stir together ketchup, mustard, molasses, sugar and S&P.  When beans are ready, put beans, onions and sauce into a slowcooker.  Give a stir to mix all ingredients.  Place slowcooker on high and cook for 6-8 hours.  For the first few hours, if the beans seem to be getting dry, add additional water.  Check and stir every hour or two.