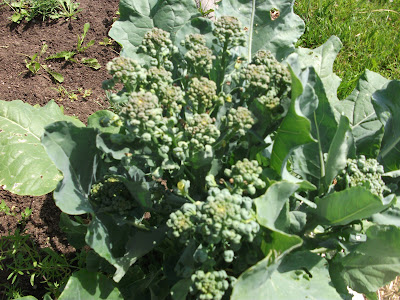 I have not grown broccoli before, but I was aware that it was a cool-season plant and was expecting it to bolt.  So I was keeping a close eye for a nice tightly formed head of broccoli so that it could be harvested before it began to flower.  Well ... I waited and waited and next think I know the darn plants had gone too far. 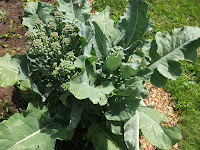 The weather is just too hot to be growing broccoli at this time; I should have waited for a later planting with a fall harvest.  That firm head of broccoli just never happened. 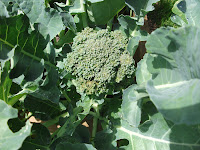 Out of 5 plants, I was able to salvage a nibble at best - one actually had a good head, small as it was.  I still have 8 or 9 smaller plants, but I'm not expecting much from them in this heat. 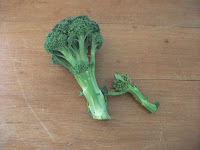 However, I was anxious to taste what little I had, and ate a couple of teeny pieces raw.  After a quick cleaning of the leaves, I nuked the remaining broccoli spears for a minute, and topped them with a bit of butter. 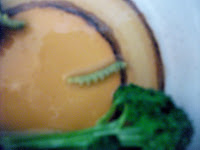 After another bite or two, I looked down and noticed the worms in the bowl, two of them still attached to pieces of broccoli.  I know it's not necessary to point this out, but I will anyway ... GROSS!