Heaven in a Potato 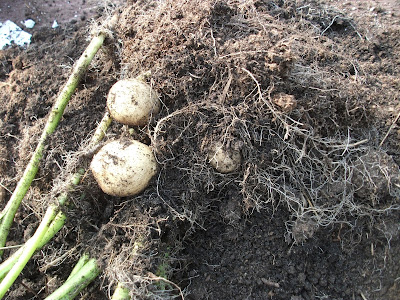 Seriously, I am not exaggerating.  If you have even a square foot of space available or room for a 10-gallon pot on your patio, I strongly encourage you to grow a potato plant so you can taste the glory for yourself.  Not joking!

While doing my rounds of watering each day, I take a quick look to see if anything needs to be dealt with (dead buds to pick, yellow leaves to remove, or veggies to be harvested) and I found a potato sticking out of the dirt (a Kennebec): 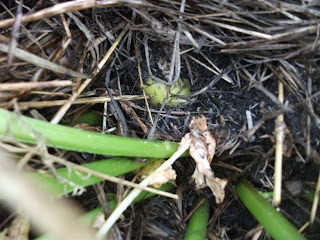 Good sign that there are actually potatoes under all those "vines" and dirt, but when potatoes are exposed to the sun, they turn green and become toxic.   Normally, with a larger potato I would just cut off the green part, but this one was too small and so I tossed it.

I've been wanting to check out one of the potato plants to see how they are growing in the containers, so this was a good excuse - if a potato is already popping up out of the soil, there must be lots underneath, right?  Not quite. 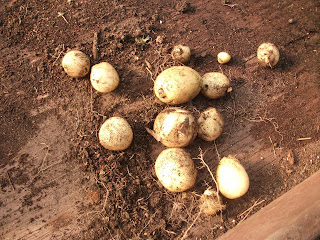 But it was worth it both for the nibbles I just ate and also to get an idea what was happening in the other containers.  So yeah, they are pretty small still and I'll wait a bit longer before harvesting any more,  but not much longer ... I deliberately planted 40 plants so I could eat plenty of small potatoes with enough plants continuing to a more mature harvest. 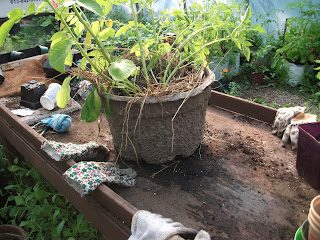 Growing potatoes in containers has its pros and cons.  This particular container was a bit on the small side, so almost appeared root bound when I turned the soil out. 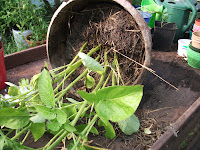 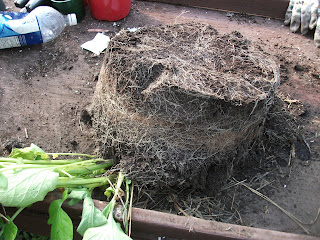 But the small size made it that much easier to hoist it onto my working table in the greenhouse and dig through the dirt.  Too often when digging in an outdoor garden, I have missed potatoes, or split them with a shovel trying to dig them out.  Hopefully the bigger containers I have going will produce a similar quantity to what I get in a regular garden.

In the meantime, I will try to contain my desire to unearth all the potatoes in the yard and drench them in truffle oil.