The good news is that I already have two ripe tomatoes; the bad news is that they are both prematurely ripe (tiny) and suffering from blossom end rot.  I don't know if those two conditions are related, but with plenty of large green tomatoes, none others are close to maturity.

From what I have read, blossom end rot is a symptom of calcium deficiency which itself is caused by fluctuations in the water supply.  The plants suffering from blossom end rot are a few tomato plants in containers in the greenhouse, but also one of the summer squash planted in a hay bale outside (eight-ball zucchini). 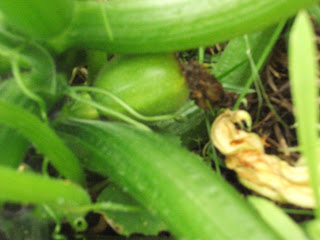 I believe it is also affecting one of the watermelons and that may have been the problem with one of the pumpkin fruits.  And I have seen it on peppers (both sweet and hot) in past years.

As a quick fix, I will be more conscious about consistent watering techniques, and for the container plants, I've added additional soil where possible as that is the main source of nutrients.  I'm not entirely sure what to do with the squash plant in the hay bale garden.  Especially since there is a perfectly healthy eight-ball squash growing on the same plant. 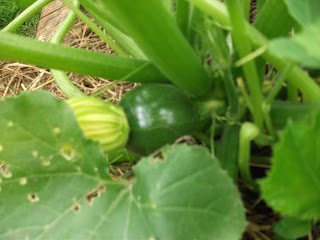 Based on this, I assume the deficiency affects fruit growth at a certain point in time, but not all fruit borne on the same plant.  As such, it is difficult to know when the deficiency occurred, and if it has already been remedied!   The squash plant (and equally the tomato plant) has very healthy foliage, so it doesn't readily appear to be suffering from a water shortage. 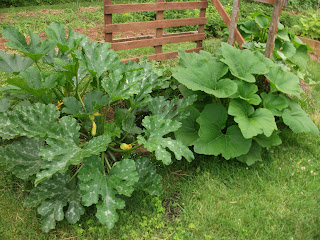 Blossom end rot is not contagious, so I will just keep an eye out for other affected fruit and hopefully maintain a steadier watering pattern going forward. 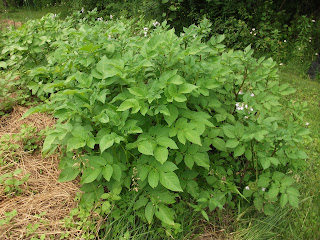 The other interesting development I noticed in the garden today were berries on some of the potato plants.  I have seen these in the past, but rarely.  The plants themselves are some of the largest and healthiest I've had in the 6-7 years I've been growing potatoes so I don't know if that is related to the sudden appearance of the berries. 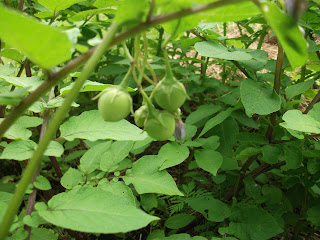 Potato berries do not always form on potato plants.  They contain true potato seeds (versus seed potatoes). Apparently potato plants grown from seeds rather than "seed potatoes" don't produce as many potatoes and the process to save and prepare the seeds is a bit complex, so I'll just leave them be for now.