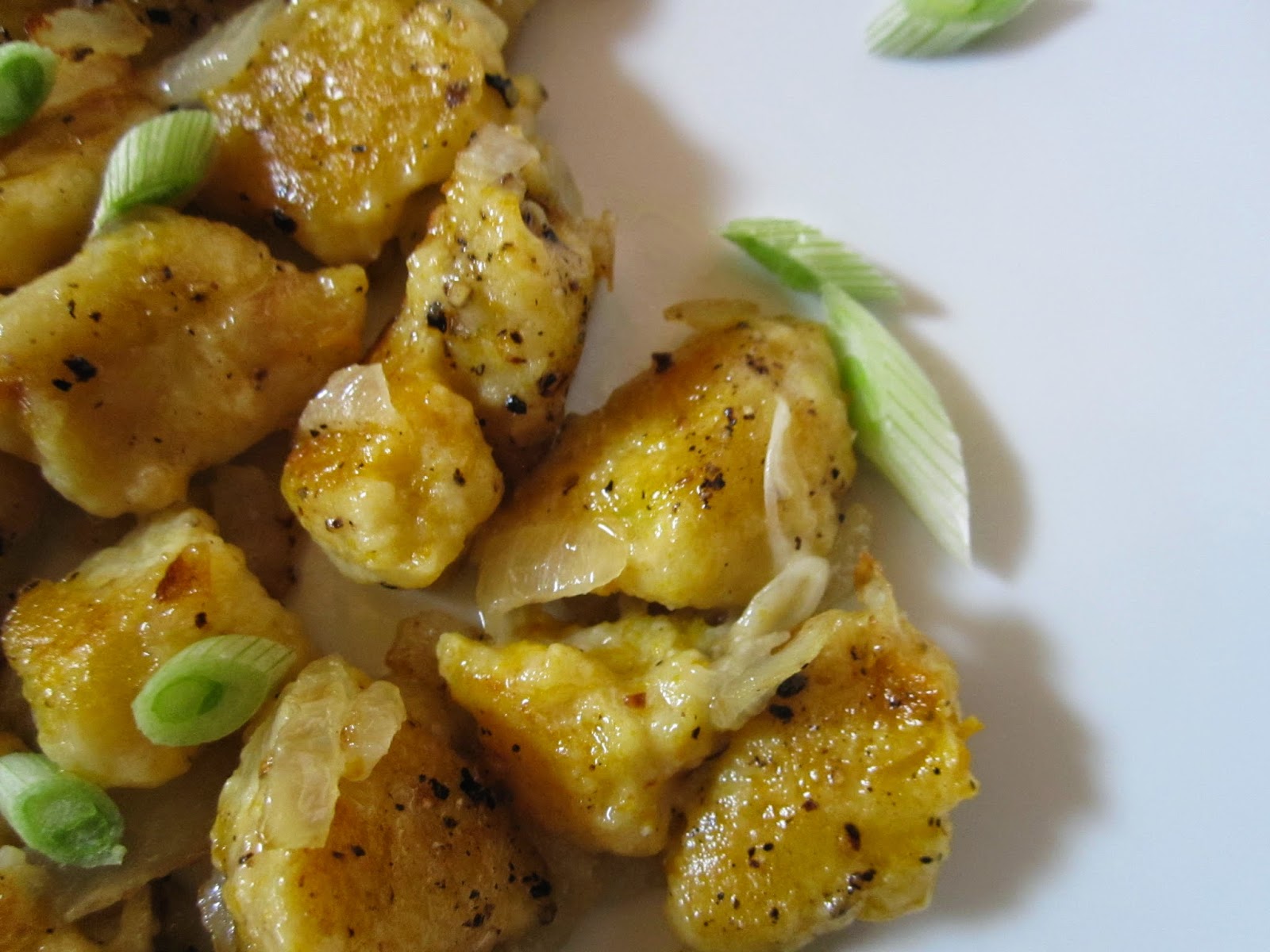 After making these pumpkin and zucchini biscuits, there was so much pumpkin leftover from the massive Lumina pumpkin I had harvested last fall that I froze several pounds.  I now need to start making room in the freezer for new goodies - although by the looks of it outside, I suspect the asparagus and rhubarb will be a long time coming. 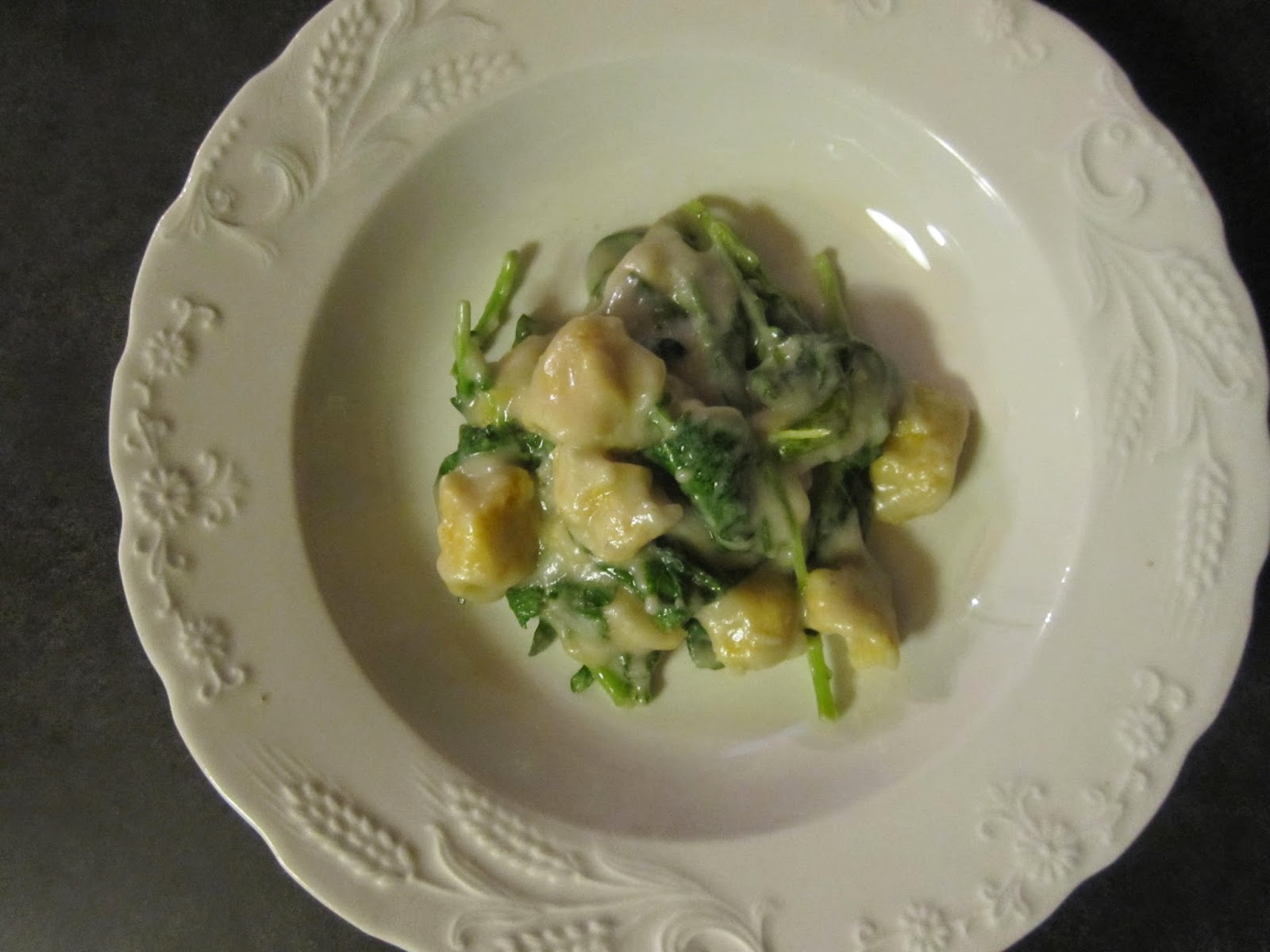 I call these gnocchi because, well, so does everyone else.  But I have never gotten the handle of shaping them properly or making those little marks in the dough to make them really seem like gnocchi.  And I use considerably less flour so they are more like super light “dumplings” (which also makes it challenging to make fork imprints since the dough is softer than most gnocchi).

Although there are many recipes for this type of thing, I was really inspired by the lightest-ever gnocchi’s I had at a Bloor Street West (Toronto) restaurant years ago.   The only way I have been able to recreate the airy texture was to make them with no flour – just ricotta and parmesan cheese.  Delicious, but too rich for more than a small appetizer serving.  Especially when accompanied by the most traditional sauce of Sage Butter – literally sage-flavoured butter.

So I set out to make a pumpkin version of those ever-so-airy dumplings.  And I wanted to come up with a different sauce than the usual as well.  So below the recipe for the gnocchi, I have suggested two different ways of serving these up (in the main picture above, they were cooked perogie-style - boiled, then fried with green onions and lots of cracked black pepper.  Bacon would have been awesome if I had any in the house). 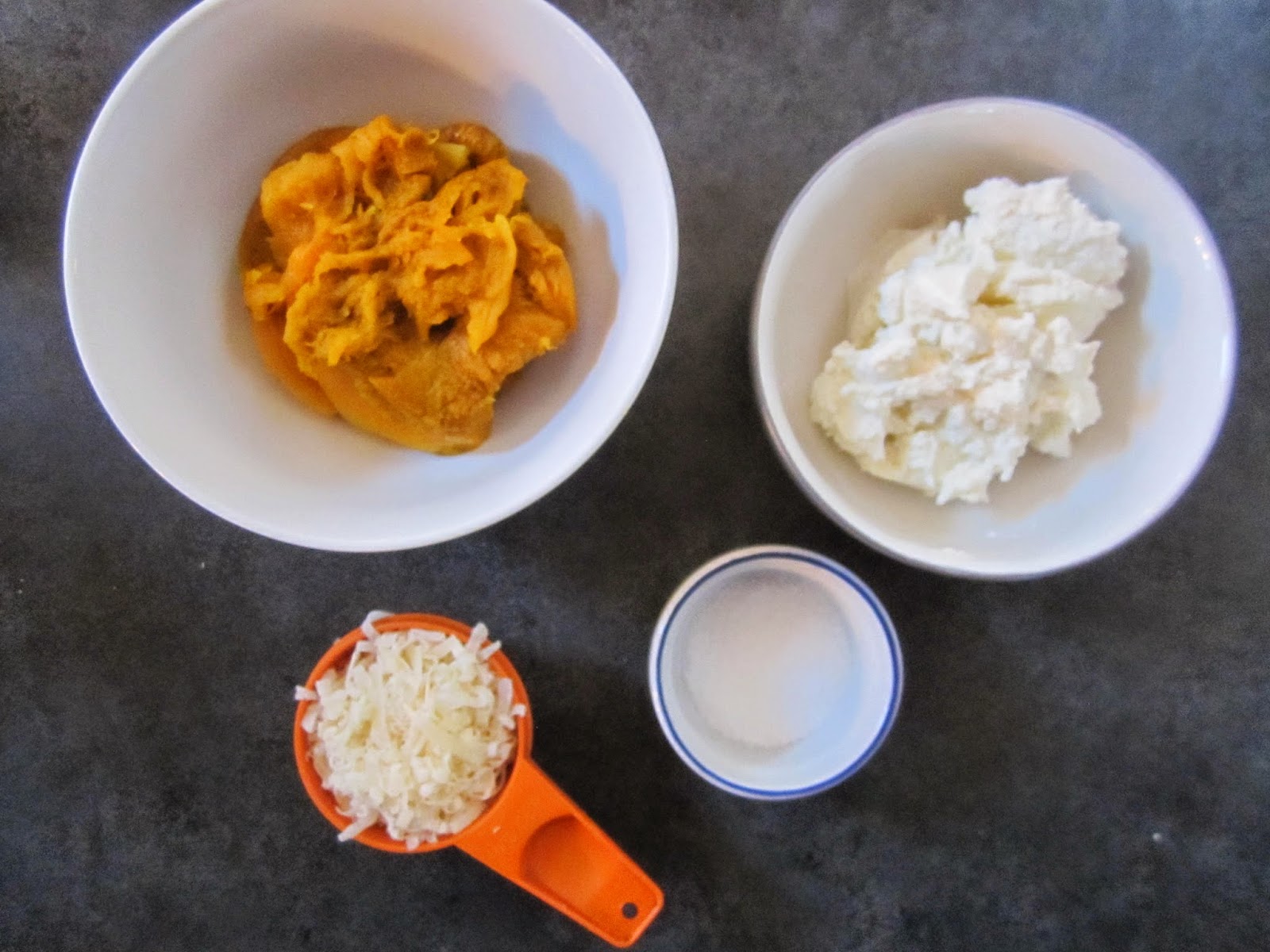 
* Because I was using frozen pumpkin, it was quite moist (pumpkin is also moister than butternut squash in case you choose to use squash).  Try to use less than this amount of flour to keep them light. 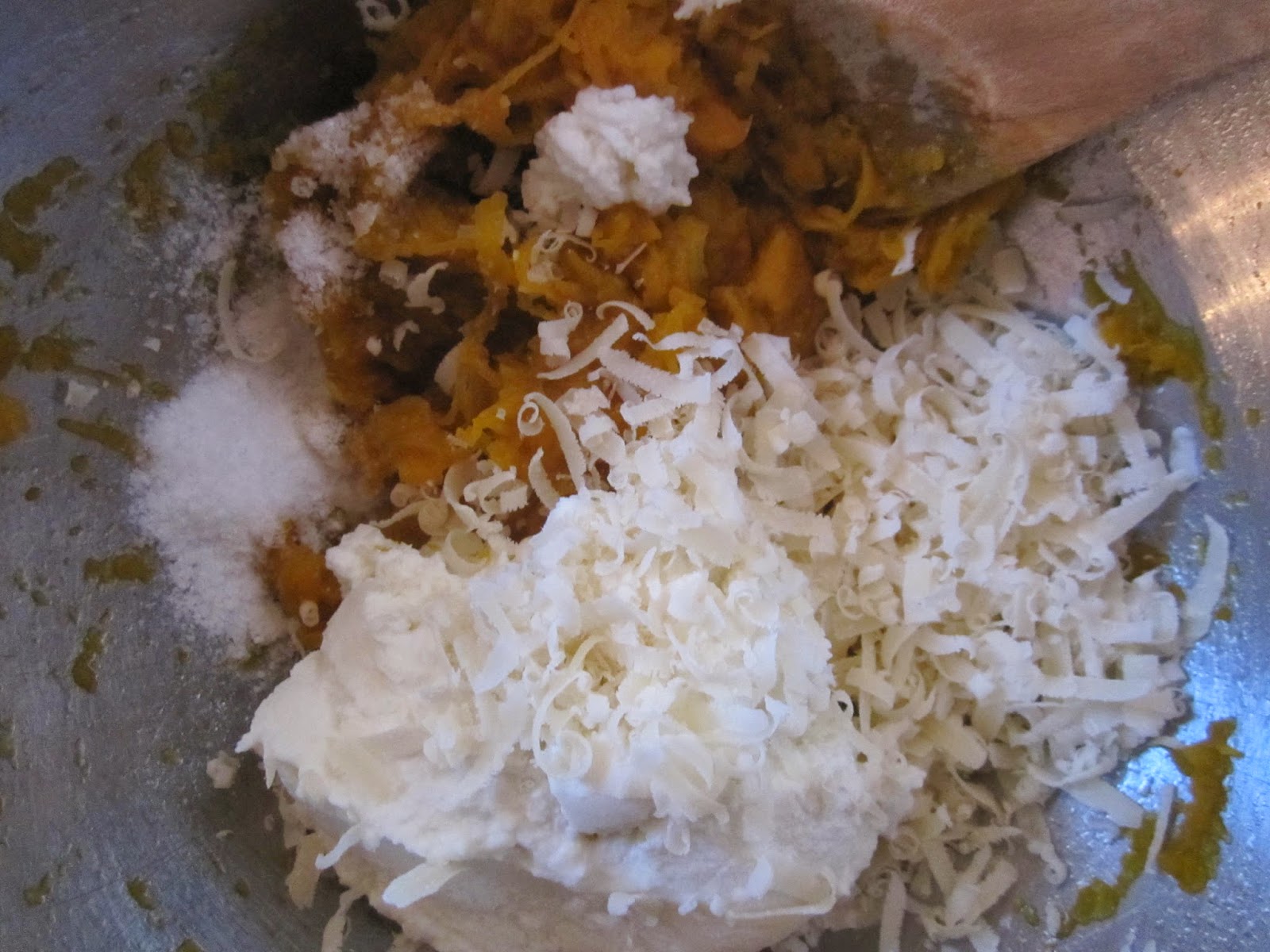 Mix together the pumpkin, ricotta, egg (lightly beaten), salt and parmesan.  Add in about a 1/2 cup of flour and lightly mix with your hands.  Add additional flour as needed.  Note that some flour will be added during the next stage. 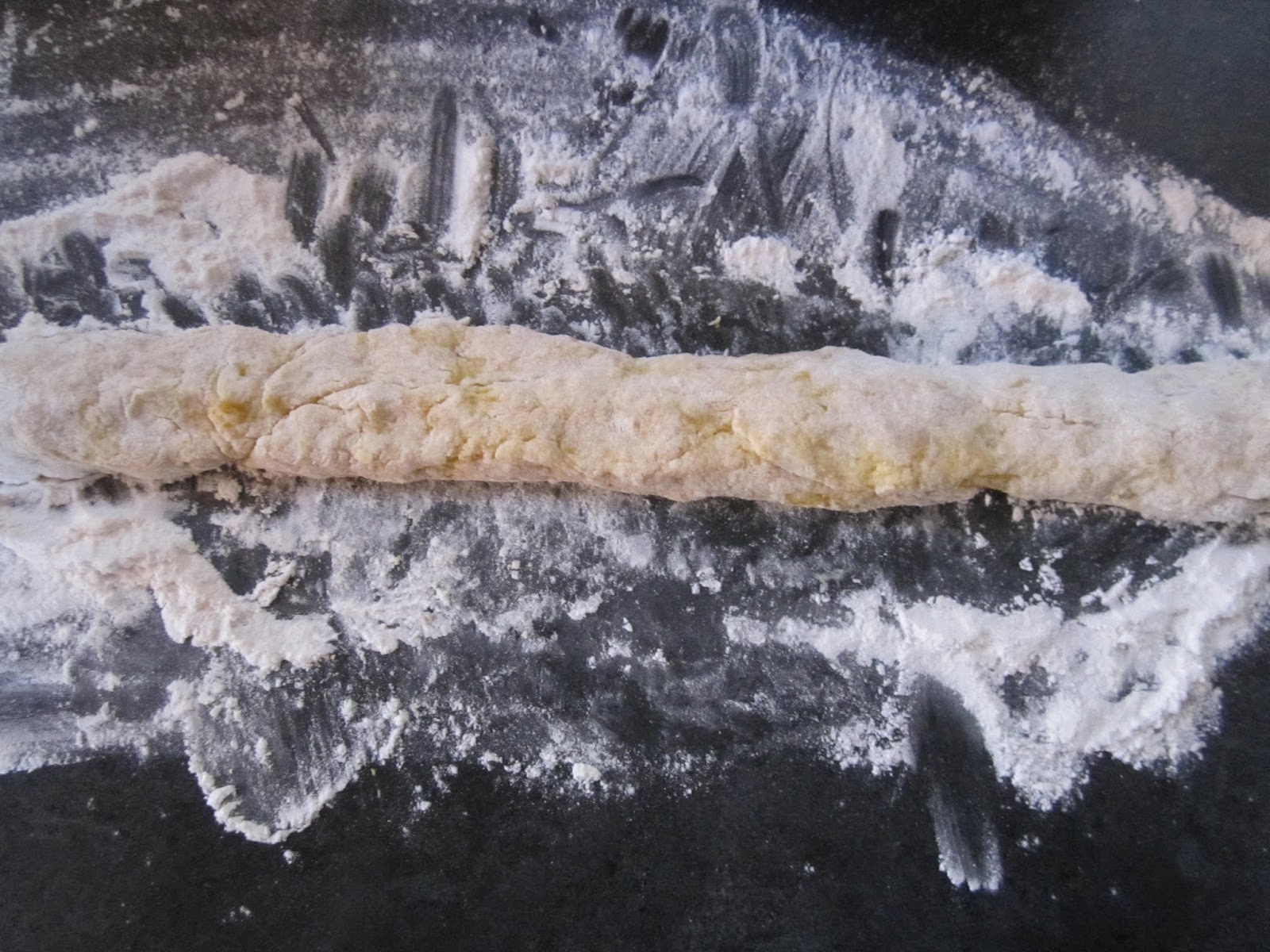 To cut the dumplings, first split the mix into 4 portions.  Flour your working surface then roll out one of the portions into a long thin log shape. 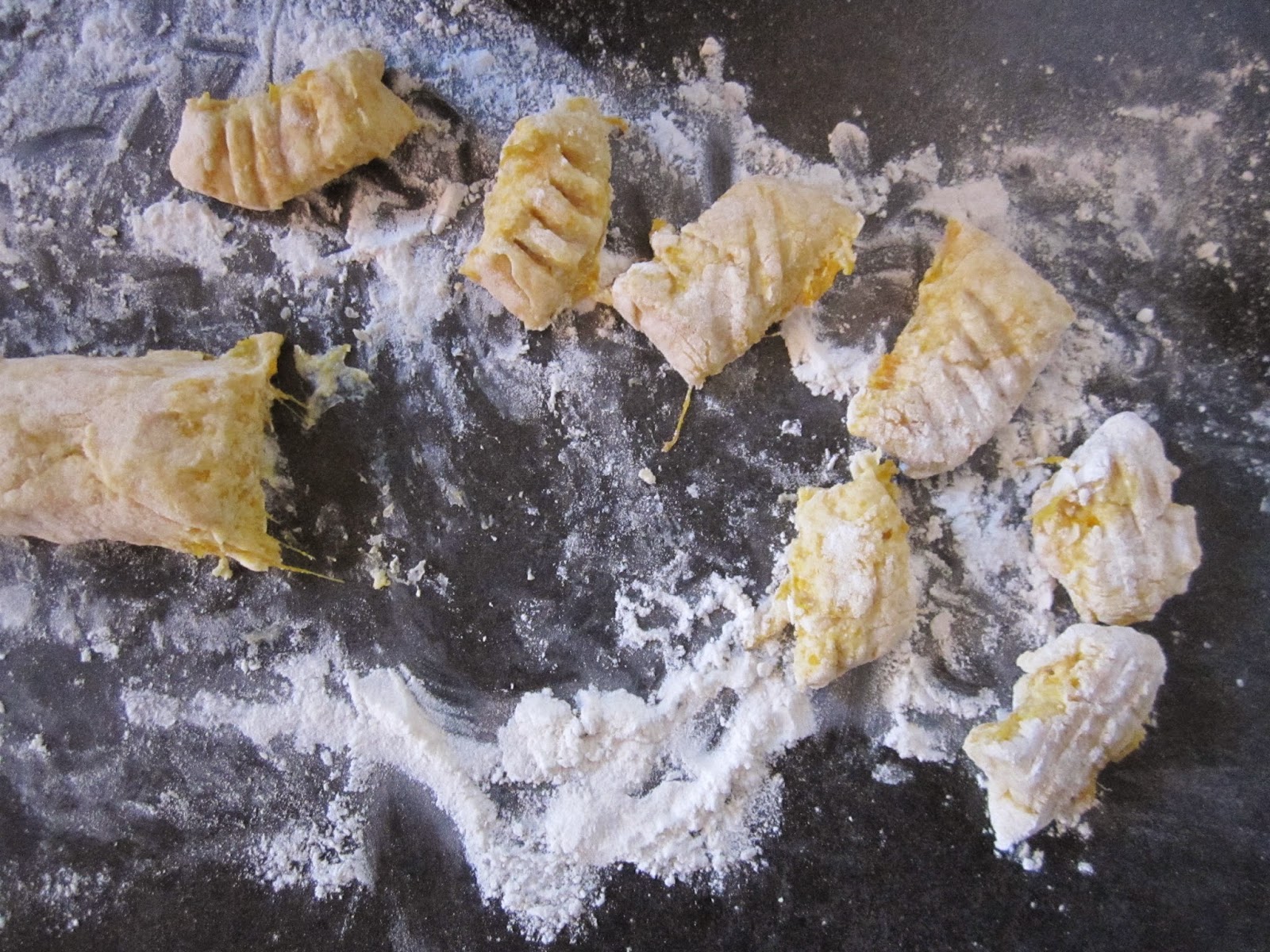 Using a fork, cut off small pieces of dough, rolling in a bit more flour as each gets cut off. 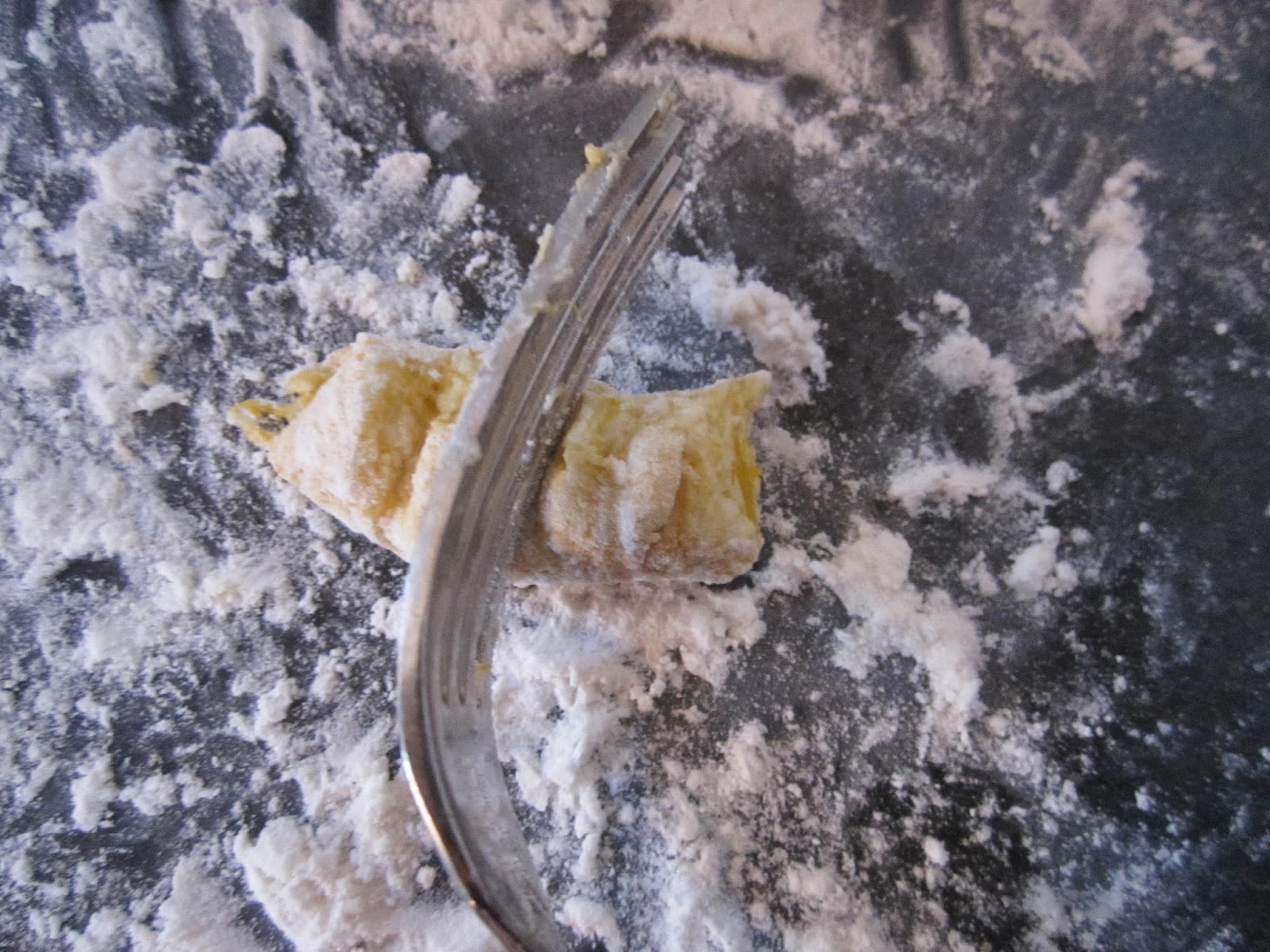 My first pieces were too big for what I wanted so I cut them in half again. 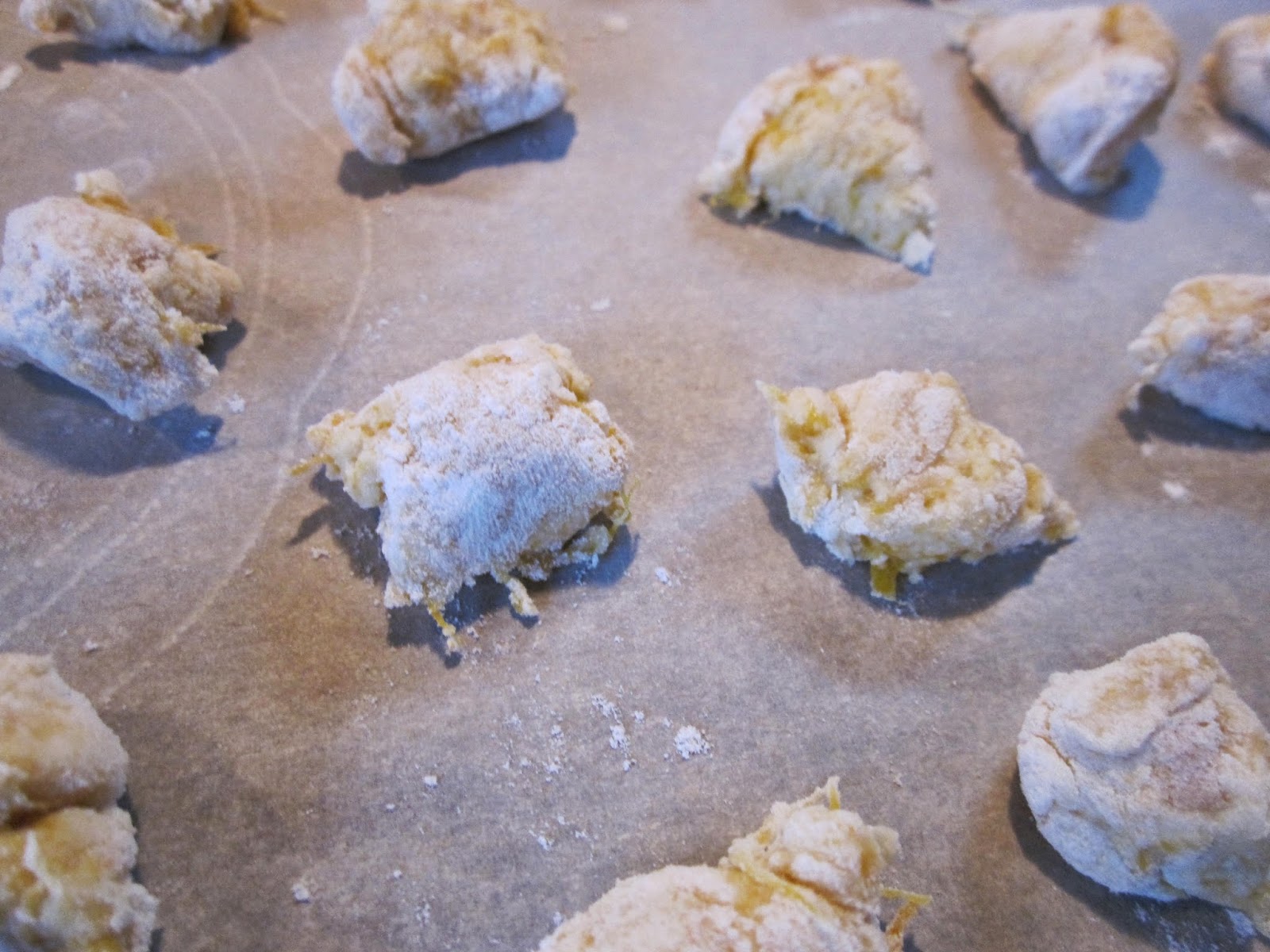 Freeze individually on a parchment paper lined tray before bagging up.


To cook, simply place in a pot of salted boiling water and cook just a minute or two.  When they rise to the surface, they are ready.  Toss with your favourite sauce ... I've noted two suggested below. 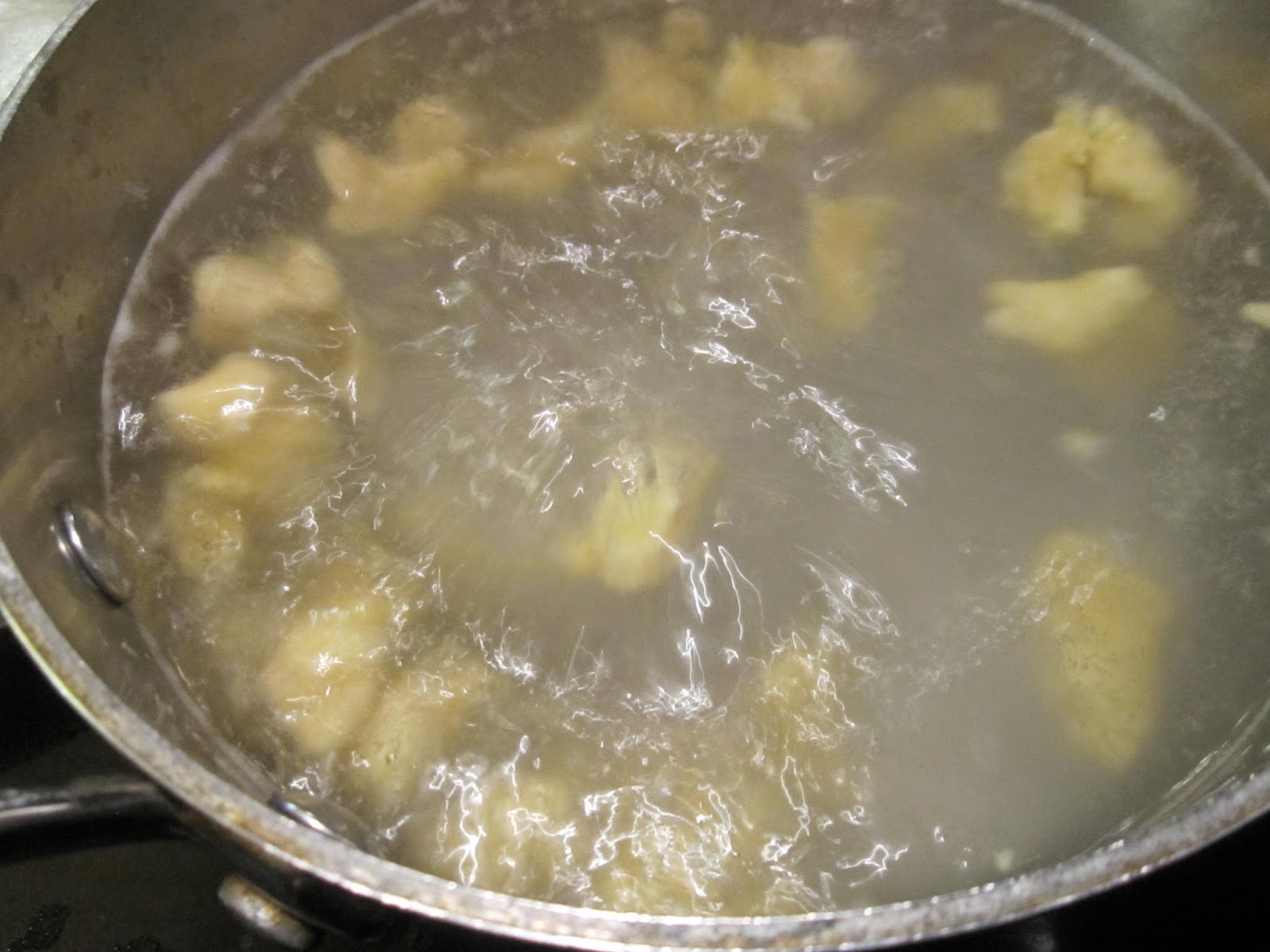 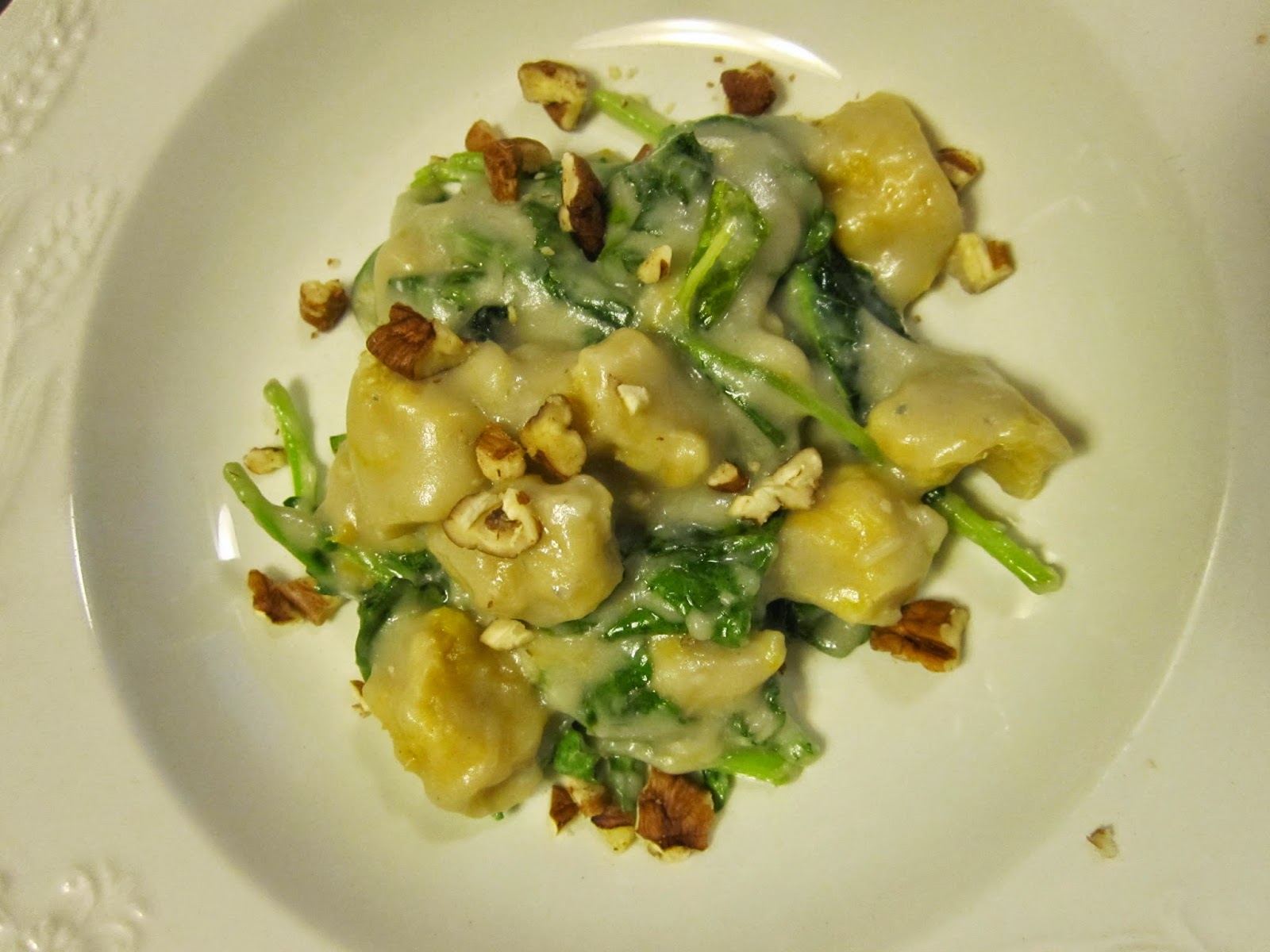 OK, well this first one is almost as rich as the sage butter concept, but I couldn’t help myself.  The thought of having these tossed with a gorgonzola sauce was too much to resist.  But rather than a béchamel base, I made it more like a veloute – basically I just started the sauce with a roux of flour and butter as you would for béchamel, but I added chicken stock instead of cream for a lighter version.  Then toss in some blue cheese.  When the sauce is ready and the gnocchi are cooked, toss it altogether with a few handfuls of baby kale.  The kale should wilt in the heat of the sauce.  Garnish with chopped walnuts or other nuts. 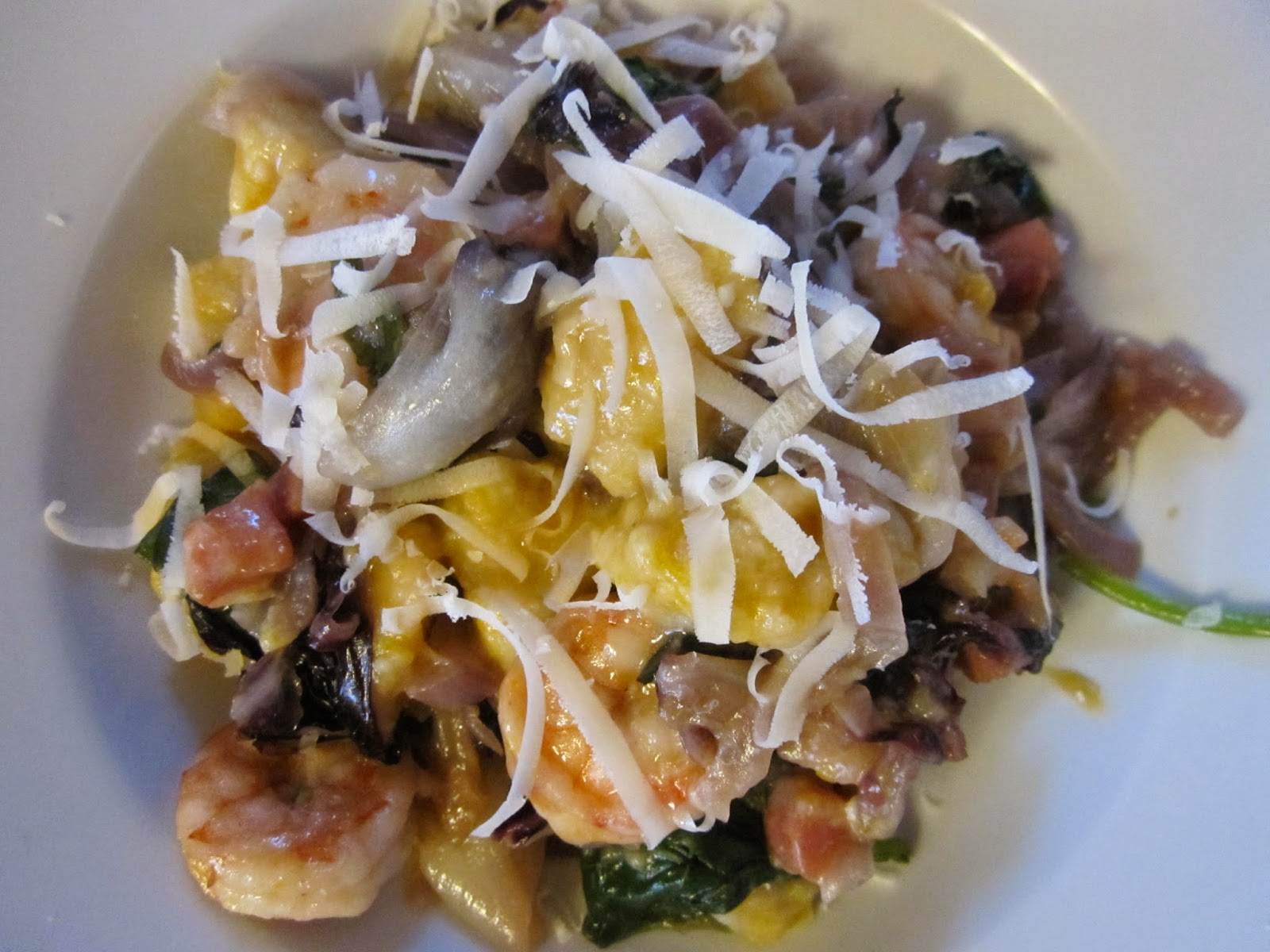 This was inspired by a dinner made by a friend recently which itself was based on this recipe from epicurious: Penne with Radicchio, Spinach and Bacon.  The recipe also uses a head of roasted garlic - so good!

I used pancetta instead of bacon and added shrimp just as my friend had done.  But rather than the penne, I’ve substituted the gnocchi and used baby kale instead of the spinach as that is what I had on hand (Yes, I had gnocchi twice in two nights to try different sauces – I still had baby kale from the first variation above).