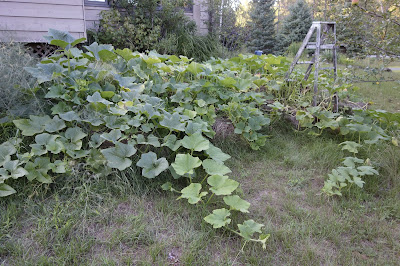 I had planned on posting monthly updates on the squash plants I am growing in hay bales this year, but I am just a bit behind following the July 9th update.  And what a difference!  Here is a wider viewer not shown in the July post for comparison to the one above taken earlier this evening: 
This is a new location in an attempt to hide from the squash bugs.  Not so lucky, but I've managed them ... so far!  I dealt with cucumber beetles since early in the season and, in the past month, have started to deal with the squash bugs (not to be confused with a stink bug, just squash bug).  I kept up with them for a while, but had some days where I wasn't able to get to the plants, and, more recently, the vines are such that I'm having a hard time getting into the centrally-located leaves without stepping on the plants.  So I'm not quite as diligent and they are spreading. 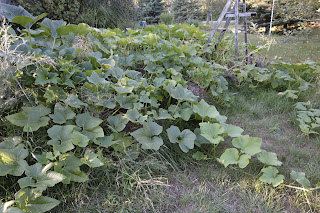 Between the bugs destroying the leaves and me pulling off entire leaves to drown the attached bugs, some of the vines are starting to lose some foliage.  And I definitely have at least a few weeks before any of the squash are fully mature.  But not too bad for other vines that are stretching out ... 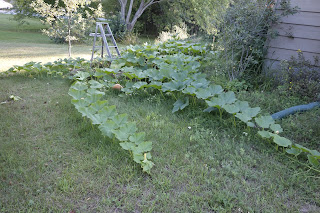 So here are some of the squash/pumpkins I have so far - not great considering the size of the plants, but I've never had great yield before and refuse to be disappointed by anything I get considering the bugs I've had to deal with.


Unless I'm confusing the few butternuts I have, I see no sign of the Japanese Pie that I planted.  That was a heritage variety I chose for it's supposed ability to better withstand bug attacks.  And same for the two Tromboncino squash plants - the singular variety of summer squash I had planted as it was known for its vigorous growth which can help when bugs get in the way.  Very disappointing as I've had no summer squash to eat while others are inundated!!  And my old standby, Table Queen Acorn ... also nowhere to be seen.

And here's a victim of something ... did it rot first and then attacked by bugs, or the other way around? 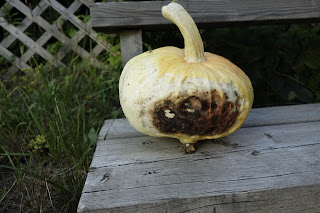 And a final question to anyone reading this - does everyone have as hard a time as I do killing off things that grow in the compost?  Every year, I plan to have the best composting year ever with constant turning over of the pile for aeration, etc.  And well ... every year something pops out that I don't want to disturb.  Like this squash plant.  No idea what it is (yet) but if it doesn't form a fruit soon, I will pull it simply because it won't have time to mature.  But in the meantime, I keep a watch because I'm oh so curious what it might be!! 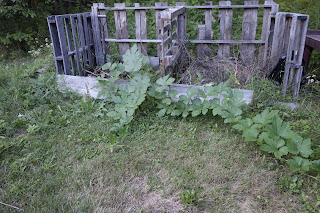