Why is it that I always hear people complain about having too much rhubarb, but I can't find anyone offering any when I want some? For many years, I have always had plenty ... for making great dishes, but also for experimenting.  Since I am in a new location this year, I have just planted rhubarb and need to let it grow, produce and feed itself for the coming years so I cannot harvest any of my own this year (as if there is any use for the few spindly stalks available anyway). 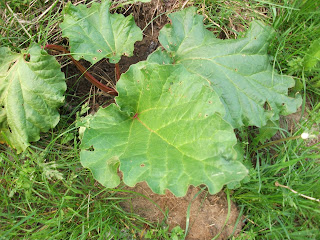 Needless to say, I've been forced to purchase rhubarb at a local farmer's market!  It becomes expensive to experiment, and I've already been disappointed by a recipe that was supposed to produce a "super tasting rhubarb treat" - most of it ended up in the garbage.  So my latest purchase this past weekend was used more wisely - a stewed ginger rhubarb jam.  I have made many jars of something similar in the past.  I don't have enough now to make the effort of bringing out the canning equipment, so I'm just keeping it in the fridge, but I will happily make many jars next year when I have access to free rhubarb in my own yard!

The rhubarb I purchased at the farmer's market was pretty green ... sometimes this is a result of the variety, sometimes a timing of the particular harvest.  I refuse to add food colouring to my food, so maybe it doesn't look as pretty as some.  But it's delicious!  And very gingery. 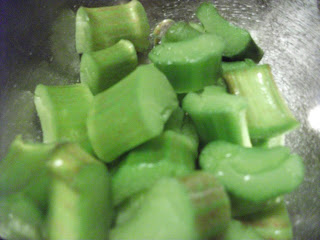 An important point to note is the size of the rhubarb chunks ... I used 10 cups in the recipe, but the rhubarb pieces were cut quite large - about 1.5" x 1".  When piled into a measuring cup, there are a lot of space gaps, so a smaller cut would take a smaller measurement.  I wish I had weighed the rhubarb, but too late now!

Let stand for a half hour for the sugar to dissolve. Then cook over medium-high heat until thick - about a half hour but it can really depend on the water content in the rhubarb.   You want it to thicken, but keep in mind that it will continue to thicken a bit as it cools.  Pour into clean jars and refrigerate (or process with an appropriate canning method). This recipe made a little over 1 litre.

And I don't know how much difference this made in the "setting" of the jam, but I know that lemon rinds and seeds contain natural pectin.  So after zesting and juicing the lemons, I wrapped the rinds and seeds in cheesecloth and let it float amongst the fruit as it stewed.  I always use organic lemons when using them for zest as they do not have the usual wax-coating, so with a quick wash, they are perfectly fine for this purpose.