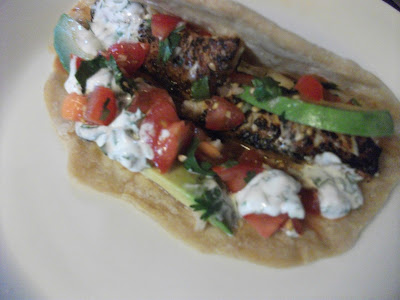 I have a tortilla press that does not get used very often, and I now remember why.  It must be slightly off-set, because it doesn't quite press flat - one side always ends up slightly thicker and I end up rolling out the tortillas or stretching them out in the same manner as I make naan bread. 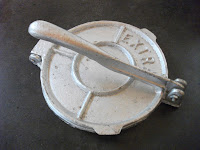 In fact, the tortillas look pretty much the same as the naan except they are unleavened.  This is the first time I've made flour tortillas (previous versions were corn tortillas made with masa harina) ... like most things, they are so easy to make I have to wonder why I ever buy them.


The salsa and cilantro cream can be made in advance; actually, best made a bit in advance so the flavours have time to mix.  And the fish should sit in the marinade for a half hour.

I can't believe that I managed to have a ripe avocado when I needed one! 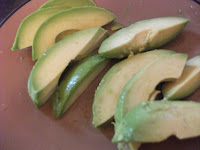 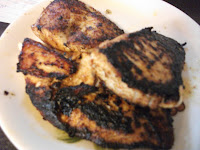 Mix together oil, chili powder, cumin and juice of two limes.  Coat tilapia fillets in marinade, let sit for a half hour. When ready to eat, heat grill pan and brush with oil.  Grill the marinaded tilapia until flaky; a few minutes per side depending on thickness. 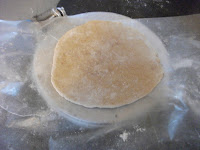 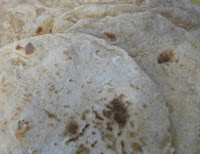 In bowl, mix 2 cups flour (I used a multigrain flour blend), a pinch of baking powder and 1 tsp salt.  Some recipes call for lard, some don't.  I didn't have any in the house, so I sliced up 1 Tbsp of cold butter and mixed it into the flour mix with my fingers.  Then add 3/4 cup warm water.  Stir and gently knead until a dough forms (add more water as needed).   Cover and let sit for 45 minutes.

Pull off golf-sized balls, flatten in press (or with rolling pin).  Cook in a dry pan for 30 seconds each side.  Keep warm in oven, or quickly heat in dry pan again just before use.  This amount makes about 8 tortillas, so plenty of leftovers. 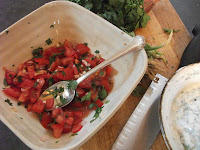 To make fresh salsa:
Chop 1 cup tomato (I always use grape/cherry tomatoes to get more skin for texture) and 2 Tbsp cilantro.  Mince 2 small garlic cloves and 1 Tbsp shallot.  Mix in bowl with juice of 1 lime.  Add salt to taste. 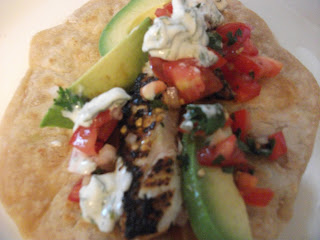