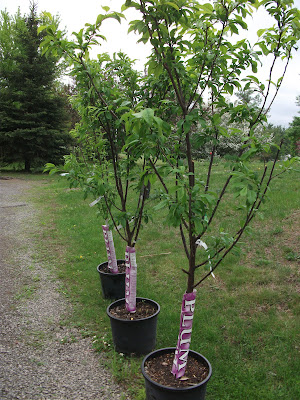 During a recent shopping spree at various plant sales, I was told of a sale on fruit trees at the local Crappy Tire (much cheaper than the price at most nurseries).  I have two crabapple trees and a Haralson apple tree in the yard - at least according to visitors who seem to know trees as I'm new to this property and haven't seen any production as yet.  But I don't have plums, and I've always wanted plum trees.  So as I often do, I boogied on down to the store and picked up a couple of plum trees.

The picture on the trees labelled "Satsuma" looked a lot like the kind I grew up eating, so I bought two trees.  I knew that plums needed cross-pollination so two trees would be required.  After I got home, I googled plums to see what's what about planting, etc.  Well, no surprise to anyone who knows me, but I didn't quite get the facts right!  Cross-pollination apparently means pollination from a different type of plum - in the case of Satsuma's, the best option was Santa Rosa.  Luckily, they were also selling Santa Rosa's, so I now have three plum trees (yes, I could have exchanged one of the Satsuma's but I have problems returning things!).

I just found another website that indicates Satsuma are partially self-pollinating but are helped along by Santa Rosa.  Argghh!  Fruit is very new to me ... I have planted blueberry and raspberry bushes as well, but not sure how it all works (which is why I planted two raspberry bushes only to discover that I already had raspberries growing in the garden). 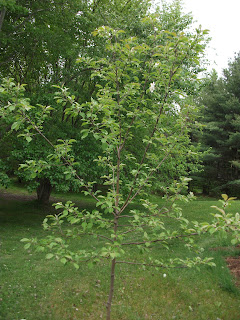 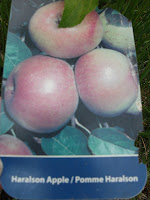 What I don't understand is why there is only the one apple tree?  It's small, so obviously only a few years old ... but does it not require a second tree for pollination?