The last few days have been chilly indeed, dropping to freezing or below overnight.  Plants from the greenhouse that were in one-gallon or larger containers were covered with plastic, sheets, towels, tarps, whatever I could find.  And anything that could be brought into the house was.   It seems everything was well looked after as I have seen no damage. I am slowly returning plants to the greenhouse, but will take my time.  While scoping the situation this evening in the greenhouse, I spotted a nice, fat, bumblebee, so good news for pollination.

The outside plants were not as well protected, partly from laziness.

Potatoes in the garden were covered with additional soil (as were the recently planted asparagus spears) on the weekend and then covered with a tarp.  I didn't bother to remove the tarp in the mornings before work, so they've been in the dark for 3 days.  They seem fine and 15 of the 18 seed potatoes have come up undamaged. 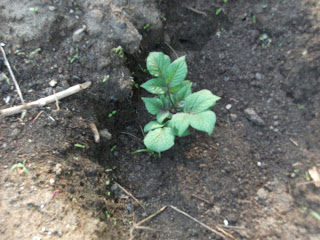 Not so the pumpkins.  I had been covering the pumpkins with row cover, and was hoping that would be enough.  Four of the eight are totally fine, while the other four have varying ranges of frost damage with this one being the worst.  I expect them all to be OK, but I guess I'll just have to wait and see. 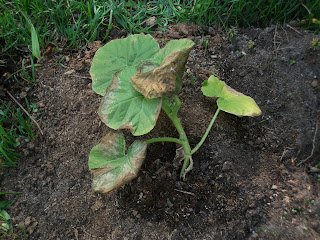 The spring planting of garlic is fine, though some weeding is obviously needed soon.  And the strawberry patch is also fine - I've never had strawberries before, this patch was here when I moved in.  I'm looking forward to the harvest, but I need to look into proper maintenance as I'm not sure what is needed. 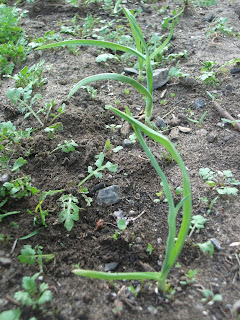 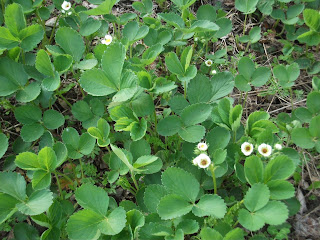 The worst damage was to flowers - I neglected the cosmos which are looking grim (luckily, I have more seedlings in the greenhouse) and some begonias (shown below) in containers that could easily have been brought inside, but I just forgot ... 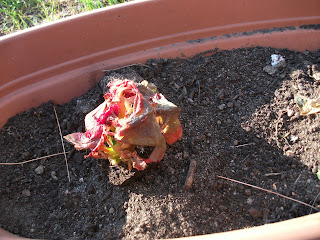 And for anyone who cares (yes, Mom, I'm talking to you), here are some pics of the robin babies ... the nest is in a tight corner, so difficult to get a good shot; some of these are a bit fuzzy but hilarious, so I've posted them anyway. 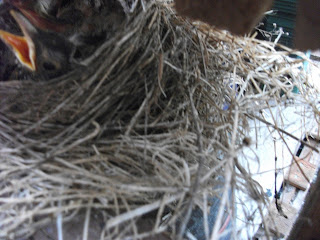 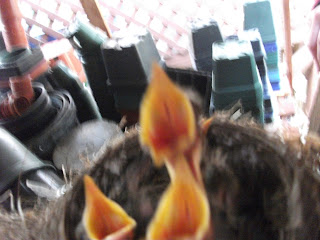