Chocolate Cheesecake Berry Cupcakes (and a bit of rambling) 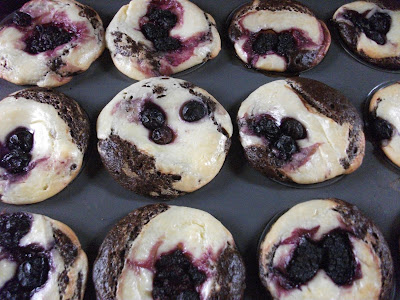 Another cool, rainy day in these parts.   As I was lazing around this morning, I saw my neighbour's dog (Miley the Beagle - he and his wife have a brood of teenage girls; I'm guessing it's a Miley Cyrus reference) run across my yard, followed soon after by my neighbour (let's call him Jay).  Miley comes over several times a day (when I'm at home, not sure what happens other times) and barks.  She just runs into the yard and barks.  I've never owned a dog, so I'm not really clear on the purpose of this.

Jay stopped by to explain that I'm new to her, and if I were properly introduced, perhaps she wouldn't be so excited as to always bark (well, it could also be Sugar Ray). We both ran around after her for a while, then he pulled his trick of getting in the truck - I guess she likes to go for rides, because she came back pretty quick.  He then walked her over, and for the first time in 5 months, she actually came right up to me.  Seems pretty sweet.  He also walked her to the window where Sugar Ray was staring just to get them used to each other.  Sugar Ray arched his back a bit, then gave a big yawn.  I guess he's not too worried.  I just hope the barking stops.

Tomorrow my friend moves into his new house after a long wait.   He is very busy as would anyone be when they are moving.  I thought I'd prepare a dessert that he can have on hand for the many visitors that will be coming by.  As usual, I checked out allrecipes.com and found this: Chocolate Surprise Cupcakes. 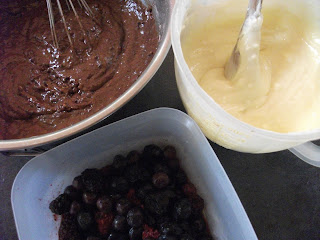 I halved the batter portion as I did not need 24 cupcakes; but I wanted it more cheesecake-y so not only kept the full amount, but actually increased it as I happened to have a bunch of cream cheese on hand.  I also used milk in the batter instead of water, eliminated the chocolate chips (I like chocolate, but enough is enough) and added a topping of berries. 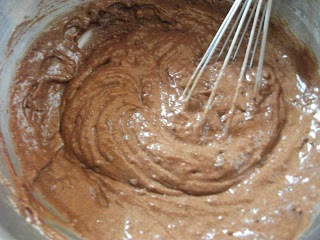 
* Sifting: I suggested sifting because cocoa is always clumpy.  Usually I just run a whisk through the dry ingredients or use my fingers to break up the clumps; no idea which is easier, but I always strive for the laziest method.  At least I don't have to clean the sifter this way!

Create a well in the dry mix, then add:
Whisk mixture together; spread evenly into 12-15 paper-lined muffin tins.  This halved recipe should normally make 12, but I wanted more of the cheesecake portion in each, so I spread it out further. 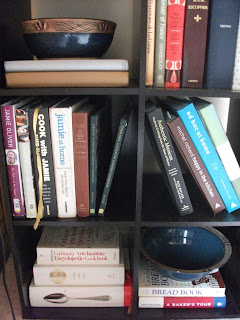 Here's another rambling: I have a lot of bowls!

But surprisingly, many of them are too inconvenient for baking purposes; nice and fancy, but too heavy to be practical - like these gorgeous pottery bowls I bought years ago.

Hence my use of a thrift-store purchased measuring cup for mixing this batter. 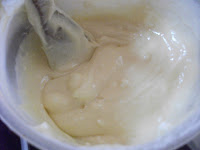 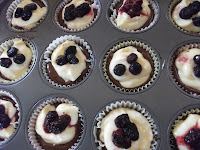 Top with berries of your choice. 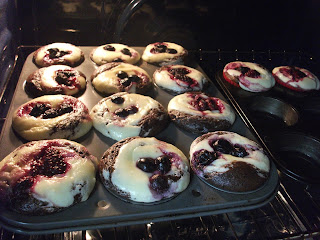 Bake at 350 degrees until a toothpick inserted into the chocolate portion comes out clean.  The original recipe called for 55 minutes, but likely due to the smaller measure of chocolate batter, it was well clean in only 40 minutes, so maybe even less would be sufficient.