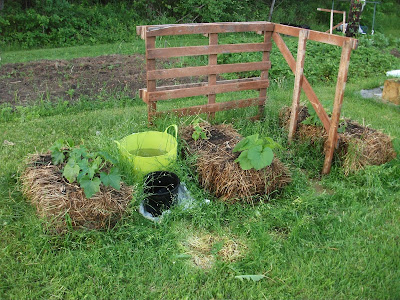 I decided to try hay bale (or straw bale) gardening for the same reasons I built raised gardens - partly for aesthetics, but mainly to avoid digging dirt!  Yes, they look kind of neat in the yard, but most important is that there is ZERO digging required.  So for anyone that doesn't have good soil to work with, this might be a good option.  But that doesn't mean these are zero effort (try getting the bits of hay off the interior of my Pontiac Vibe - not really designed for moving hay). 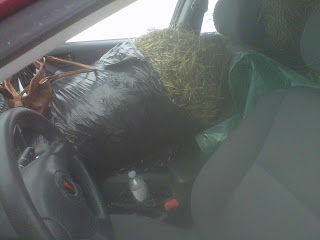 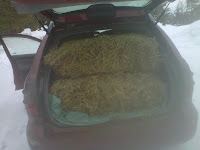 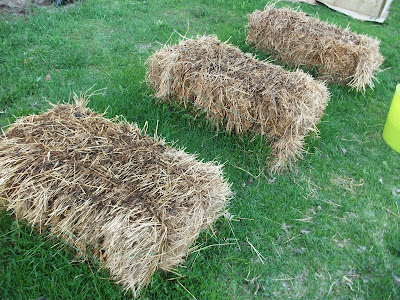 Place your bales in position; it is suggested to put them where you want them before you start watering, as once they get waterlogged they are almost immoveable (as with anything I write about here, I'm just a beginner - if you read this and think it's a good idea, I highly recommend you do some research; there were plenty of sites available to help me out). 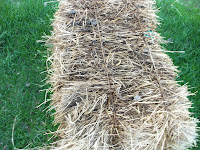 And it is apparently a good idea to plant them touching each other so that there is less exposed area on each as they dry out easily.  I placed mine about a foot or so apart as I wanted space for the plants to spread (my plan was to plant pumpkins). 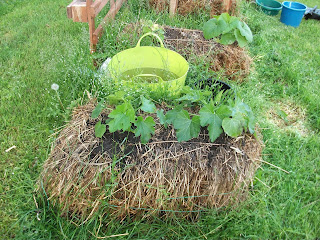 The bales should be placed so that the twine is horizontally around the bale in order to hold it together; it will slowly disintegrate over the season (or sometimes two seasons) and can then be used as mulch.  Had I placed my bale with the twine horizontally I would have had them taller than wide.  So I just wrapped my own twine around the sides so I could set them the way I wanted. 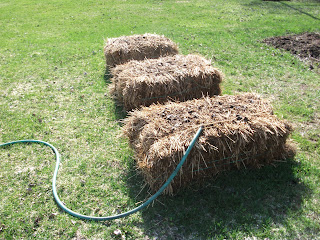 Then I just watered them every day for about 10 days - this was during the hot spell in early May and they are meant to stay constantly moist during this initial prepping period (so that didn't quite happen as it should have); eventually they kind of rot on the inside and start composting themselves.  I was a bit loose with following the instructions; the various websites I researched went into a lot more explanation about what needed to be done, but that's pretty much all I did.


When ready to plant, I spread the hay apart and pulled out some of the gooey insides to create a 6" inch hole, filled it with dirt and popped in my seedlings. 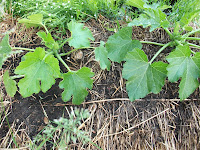 I ended up not planting pumpkins here, as I created a separate patch further back in the yard (so I could have placed them closer together and avoided dealing with all that grass coming up in between!).  Two of the bales each have 2 marketmore cucumbers and 1 summer squash (mystery pack) and the third bale has two summer squash. 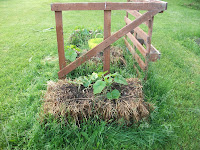 They still look healthy after a couple of weeks!  Hay bales are supposed to require a lot more watering than other gardens, but I have not really noticed that yet since there has been a lot of rain.

The slats set up nearby are from a broken shelving unit in the greenhouse which should help to support the cucumbers when they start to vine.