2015: My Year in the Vegetable Garden

This is an opportunity to share my thoughts on some new experiences that I had this year growing vegetables; which worked, which didn't.  Looking back on my 2014 "year in the garden" review, I had a mix of failures and successes and similarly so this year - all part of experimenting and trying new things in the organic vegetable garden!

The most exciting experiment has been the new greenhouse.  But 2015 was only my first season with it and I wasn't prepared for spring planting inside (I had failed to fill the bed with dirt before the winter).  It certainly helped to extend the season a little bit at the back end, but I think I'll hold off on sharing my thoughts for another year.  Here are some other things I did in 2015:

As you can see from the main picture, I used an excel spreadsheet to track the weight of all harvests.  This is a fantastic way to track harvests and compare year to year and I am glad that I have started to do this.  But I think yield-per-plant or yield-per-foot would be a much better measurement to determine what plants are performing well or not.  Yield per plant might be easy as I just need to pop the # of plants that I'm growing of each variety into a column in the spreadsheet, but I'll see how things go in the new season.  Just having the weight doesn't really help without knowing how many plants I had of each.  And I lost a few weeks of data when my computer hard drive crashed and I hadn't backed up for a couple of weeks plus I forgot to weigh many of the small harvests later in the year.

I'll probably break down some of the categories in separate posts, but you can see that I ended up with 186 pounds of food with 30% coming from cucurbits in the month of August (mainly a few cukes but mostly summer and winter squash).  It's silly to have peas in their own row as I get so few and I tend not to weigh most herbs when I use them throughout the week.  So I'll look at rearranging the categories but I have all of the detail at the individual variety level which is really great to have.

I might still do this now and then but it was meant to be a chance to show off various plants or fun things around the yard without having to actually write a post. Turns out I didn't take very many pics in between regular posts so just didn't have any to show off.  Ah well ...

I eventually made some fairly elaborate plans for the 2015 garden but I'm not sure it helped me much.  When the time came, I still threw seeds in here and there wherever they fit.  So long as I track my bigger crops that require rotation to avoid disease / insect infestations (e.g. move potatoes around to avoid Colorado potato beetle), I think I'll go back to my loosey-goosey method of figuring things out.

Aside from different varieties of the usual (pumpkin, tomato, etc.), the main new items in my garden for 2015 were escarole and kohlrabi, both of which I loved!  The escarole grew like crazy and I probably gave more away than I ate.  The kohlrabi did not grow as well as I would have liked but I really enjoyed having it fresh from the garden so I'll look into my methods and will try again in 2016.  I also loved the Jimmy Nardello peppers so will order a specific seed packet to have more of those.


Testing the "Planting When Soil Can Be Worked" Concept.  Verdict: Success

I started a number of greens (kale, arugula, lettuce) and radish in April as opposed to other years when I had not started anything until the usual outdoor planting time in early June.  So it was great to get a head start on some greens and was actually harvesting in May, at least 6 weeks earlier than I normally would!  But I got a bit excited by the warm weather and planted many cucurbits in the ground just before a late frost in May so this is a reminder to myself to leave the warm weather plants for June.

I had a really tough time this past year with pests.  First I struggled with my first ever infestation of the leek moth which destroyed a lot of my garlic - by the time they were discovered, the only solution was to handpick them off.  I was able to save about half of the garlic crop.  Row covers would be needed for the entire year until harvest but that means taking them off and putting them back on every day for watering, etc.  I've already got garlic planted for next year, so will have to figure out my plans by March or April.

Then there were the cucumber beetles and squash bugs, both of which took a serious toll on my cucurbits.  The neem oil treatments are probably the best solution but I started too late.  I am going to move any cucurbits I grow far away from my main garden area as the squash bugs will have overwintered nearby (I've already killed several in the house) and I'll simply grow less winter squash to make sure I can fully manage the pests next year (assuming I might have to handpick them).  And for summer squash, I'll grow tromboncino as the plant is supposed to be a vigorous grower - once a plant is hardy enough, the bugs can't do as much damage.


Overall, I had my usual fun in the garden and I'm already planning the crops for next year! 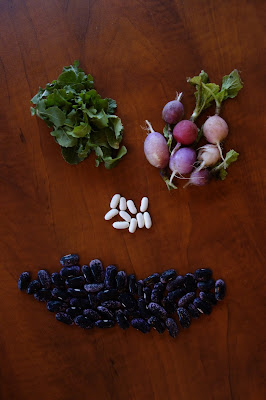 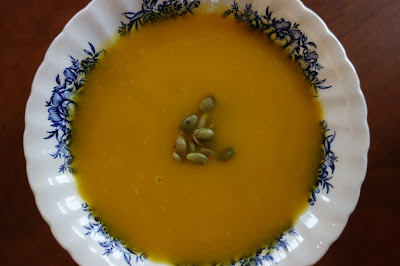 I love the brilliant orange of this squash!  The flesh from the Marina di Chiogga squash is a much brighter orange than the usual butternut or acorn squash. 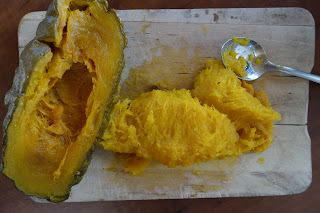 The orange juice also adds a bit of colour to the soup, but it is mostly from the squash itself. 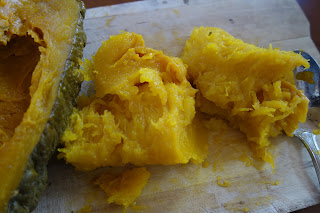 A quick and hearty winter soup!

I was looking back at previous soup recipes including this Acorn Squash Soup with bacon and sage crisps and, once again, realize that every soup I make is some pureed vegetable.  I think I need to work on my soup variety.  :)

Add the butter and shallots to a large heated pot and cook until shallots are softened.  Add the apples, squash and stock.  Season with salt and pepper.  Cook 20-30 minutes then puree until smooth.  Add the orange juice, taste and adjust seasoning as needed. 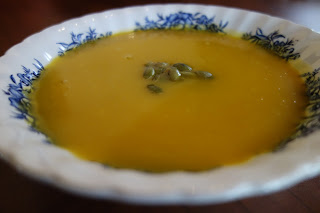 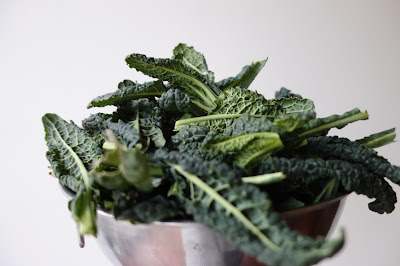 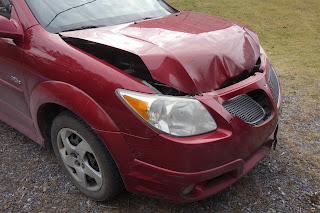 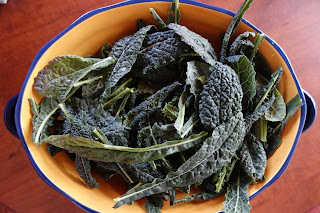