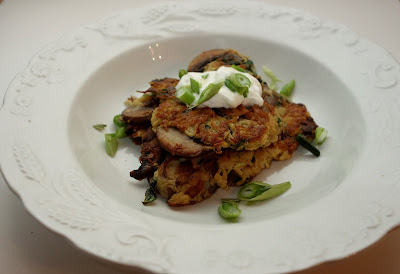 Happy Birthday to all you leap year births!  Wow, what do people do for b-day celebrations when their "birthday" only happens every 4 years??

But on to the usual harvest post, which I have been somewhat neglectful of (ugh, why does work always get in get the way of my fun time?!).

My harvest submissions continue to be about how I am using my harvests.  I made fritters to use up my last spaghetti squash from the fall harvest. 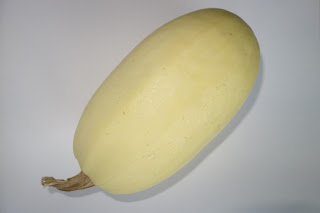 I fried some sliced mushrooms, let them cool, then mixed them with baked spaghetti squash strands, an egg or two and some parmesan cheese.  The mixture was fried up in batches to make pancakes or fitters, whatever you like to call them, and served with a dollop of sour cream and some chopped green onions. 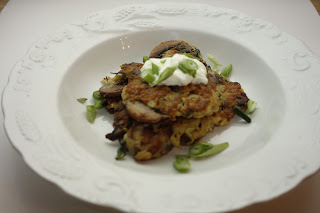 And then there was this. 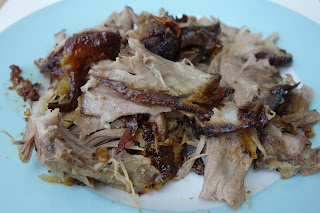 Why, you might be asking yourself, is she showing a plate of meat on a post about gardening harvests??  Because before I roasted this shoulder of lamb, I coated it with my homemade tomato jam.  And it was delicious!  As I knew it would be since I had used that combo before with these roasted lamb sandwiches.

All that I have left in my cold room for fresh produce now is a few potatoes and a basket of garlic.  But I still have lots of tomato sauces, salsa and various pickles and some items in the freezer as well.  I certainly am looking forward to spring, especially after our recent dump of snow a couple of weeks ago where we got 22 inches of snow in 24 hours.  And then this past week we had freezing rain and my power was out for about 6 hours.  Spring can't come soon enough for me!

I'll be popping over to Our Happy Acres to see what Dave and other gardeners are up to on this Harvest Monday.
6 comments: 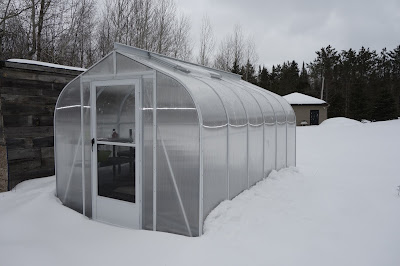 Hmm, I have some time to go before I'll be planting outside, but it is getting close to the time for starting seeds indoors. 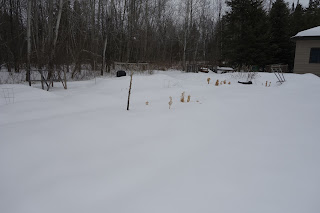 The list below includes all of the seeds I have on hand and which I expect to plant this coming growing season.  I will also have to pick up some seed potatoes and probably some onion and shallot sets (although I do have some onion seeds this year as well).

I still have to go through and organize what needs to be started indoors versus what will be sowed direct when the soil is warm enough.  But I have a bit of time left ... I looked at my spreadsheet from last year (I am soooo happy that I finally decided to document my planting and harvest dates!) and I have a couple of weeks before I need to get anything started although I definitely need to get the solarium area set up with the growing lights, etc.

I have twice as many bean varieties this year as I have in the past.  I've just enjoyed both the fresh and dried so much that I will just have to find the room for all of these!  Except the Scarlet Runner ... as you can see from my note to myself below.  I liked them well enough but wasn't super successful with the yield so I'd rather save the space for one of the newer varieties I'm trying (like all those great varieties from Heritage Harvest!).


I hardly have any seeds left for broccoli, cabbage or cauliflower and certainly did not purchase any new ones.  I just plan to use up these seeds and do not expect to try growing these again as I have not had much luck (actually I did pretty well with the Tiara cabbage so maybe that will be a keeper).  For these veggies, whatever germinates I'll find a spot for but don't expect to have too many.

But I did get some new kale and kohlrabi.  I'm sure I've mentioned many times that I love to purchase mixed seed varieties.  The kale mix packet includes Fizz, Dwarf Green Curled and Black Magic.  Even though the mix has Black Magic, I also bought a packet of Nero Di Toscano (same cavalo nero type) just because I like it so much and wanted to make sure I have a bunch of those plants.  And I wanted to try the Scarlet variety as well - mostly for looks but this is edible as well (as I believe some are meant to be just ornamental).


Now this following list seems like a lot of cucurbits!  But I have yet to successfully grow melons or watermelons so this will be my last year for those as well - I'll try germinating whatever seeds I have left and will pick the strongest one or two of each and that will be it.

SFG Dave had mentioned that mouse melons are often grown in hanging baskets which is exactly what I'm going to try this year.   And I am trying a new cuke this year - Crystal Apple.  I might try that one in the greenhouse.

And all of the winter squash (my favourite crop!!) will be limited in numbers so that I can really look after them well and manage the squash bug population that I expect to have again this year.


And some greens ... I've gone back to the same arugula (astro) and spinach (reflect hybrid) that I grew a few years ago as I wasn't happy with the variety I grew in 2015.  And I'll be trying radicchio for the first time.


I'm trying shelling peas for the first time this year with the Laxton's Progress.  And the rutabaga was an impulse buy as I had seen the Seeds Savers Exchange packet at a store in Ottawa a few weeks ago.  Otherwise, the rest of the list are the usual suspects.

And other than the regular herbs, flowers and perennials (rhubarb, asparagus, etc.) that I will have, this is the last of the list, but certainly not the least - the peppers and tomatoes.  I plan to grow very few tomatoes, just enough for snacking and sandwiches.  I usually buy bushels at the end of the season to make my jarred sauces, etc.  So for this list, it's all about the peppers this year!  I will pack as many as I can into the greenhouse and the rest will likely end up in containers around the yard.


And so I will look out the window at all of the snow and icicles and dream of warmer days to come ... really soon.  Please. 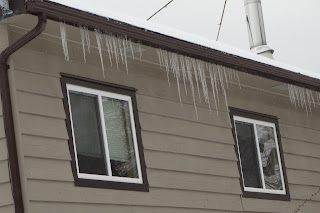