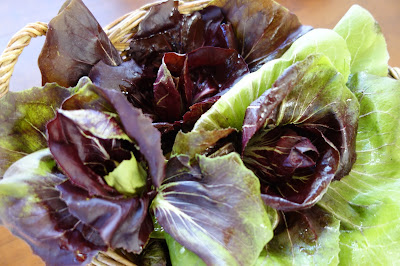 This is my first harvest of Palla Rossa Bella radicchio - it has such wonderful colours!  As far as I know, it is supposed to form a head but has not done so at this point (or at least is just starting to). Some of these were in a container since the summer but really weren't sizing up at all due to insufficient space.  And some were in a raised garden but only for a couple of months now (with more to come in that bed).  So it's not much but enough for a meal or two. 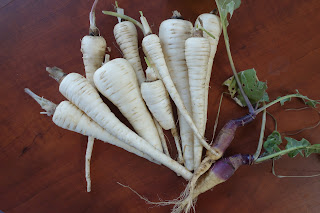 And I've pulled some more parsnips.  And at the bottom right of the photo, you'll see some immature rutabagas - I thought I'd see what they looked like and they are definitely not ready yet.  They haven't sized up well considering they've been in a raised bed since July - I don't have high hopes.  If they aren't big enough to make use of within the next few weeks, I might just leave them and see if they will overwinter (I suspect so, but not sure about my very cold winter temperatures). 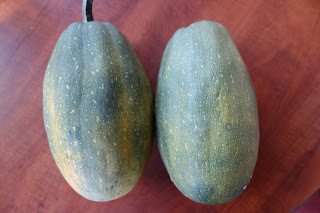 And Mom, since you were just asking about this (does anyone else remember the mystery FrankenSquash - to coin Dave's term for it - growing out of my compost heap)?  I knew it was not a summer squash early enough on from the tough skin. 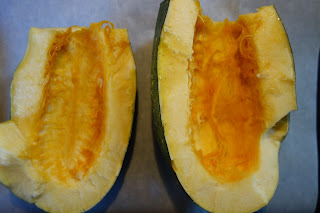 And was it ever hard ... I needed a cleaver (with a couple of drops onto the counter) to crack it open, hence the uneven split in the two halves. It resembled spaghetti squash although I had never seen (and certainly not grown) any variety with such dark green skin.  And that is exactly what it turned out to be although the flesh didn't come away quite as stringy as regular spaghetti squash. 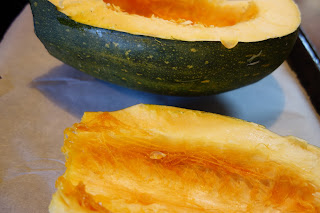 Please stop by the Harvest Monday collection at Our Happy Acres to see what other gardeners are doing this week. 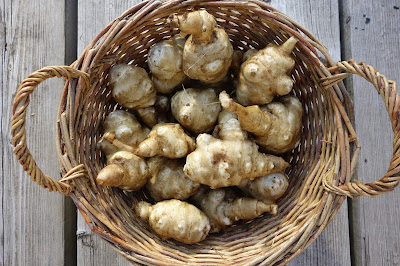 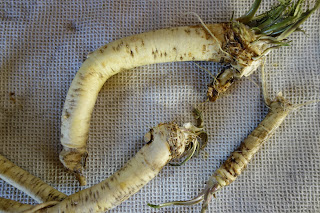 The only other item harvested was a small bunch of spring onions while cleaning out that garden bed.  I will be heading over to Our Happy Acres to see what other gardeners are doing on this Harvest Monday.
8 comments: