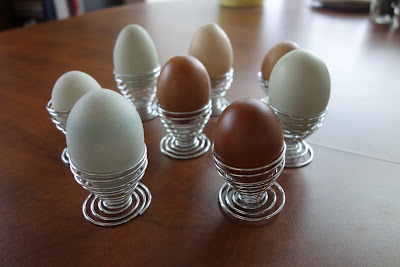 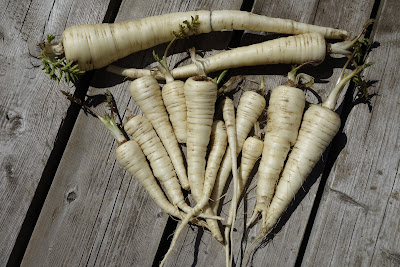 I dug up these parsnips when cleaning out one of the raised beds on Saturday - I had totally forgotten about them.  I gave half away, and roasted the remainder.  Delicious!  But I do remember leaving in some rutabaga as an overwintering trial, and that didn't go well.  There isn't anything left of them other than a couple of tops sticking out.  Ah well, I'm still learning what can be overwintered and what can't.  I did have a spinach plant in the greenhouse come back to life after I thought it was long dead, so I'll definitely plant some in the fall again. 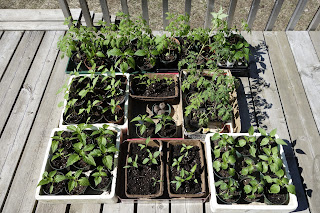 Meanwhile, I've got plenty of tomatoes and pepper seedlings (many of these will also be given away) and I had them out for a couple of hours hardening off over the weekend.  I should get them out for another hour or two today and take advantage of the few periods of no rain this weekend! 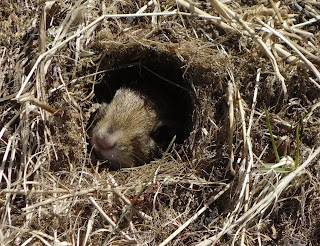 This little guy (or girl) was out and about quite a bit yesterday as I was working in the yard. I noticed the chipmunk disappeared right before the daylilies and popped its head out just as I discovered the hole in the ground.  Cute, but can be a nuisance now and then.  And more on the sort-of "critter" front ... when I had new fascia installed on the house, the contractors removed dozens and dozens of wasp nests.  I'm hoping that will improve my usual wasp challenges this year.


And I will be popping over to Our Happy Acres on this Easter Harvest Monday to see what other gardener's are doing this week. 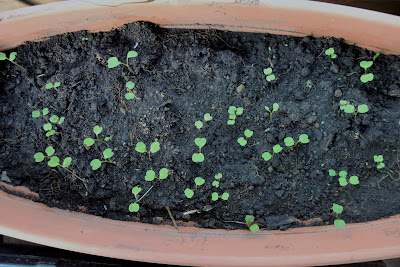 I have started some greens now, so it seems a good time to share my plans.  The arugula shown in the picture above, as well as the Bon Vivant lettuce, are sitting in the 3-season porch area which is plenty warm already.  This used to be just a screened-in porch but I had windows and a proper door installed in the fall after having the foundation cemented in.  Not sure what to call it yet - "three-season porch area" is too many words to use but it isn't quite finished enough to be called a sunroom yet ... hmm.  I guess just "the porch". 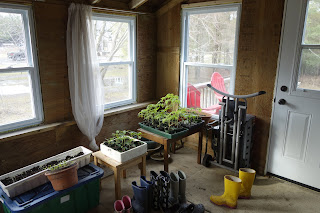 I've also got French Breakfast radish in a container.  More radish (easter egg) have been started in the greenhouse.  After reading Dave's April Greenhouse Tour post earlier this morning, I went out and planted a salad box of the Parris Island Cos lettuce. His greenhouse tour is always an inspiration to me as mine is a similar size but I'm still working out how to make the most use of it this early in the season.  But soon enough it will be filled with flower starts and the tomato/pepper seedlings can be moved in from the house.

In the ground, I've started kohlrabi, mixed kale and mustard along with Iceberg Lettuce, Kindle Lettuce (a butterhead variety) and King of Denmark spinach.  The Red Callaloo was seeded into a flower garden as I thought it would look pretty there. And I planted scarlet curly kale in another flower garden.

So this is the full list of greens I plan to grow this year, mostly just more varieties of the same but it's nice to have options (the kale, kohlrabi and mustard varieties were listed in my earlier post on brassica plans). 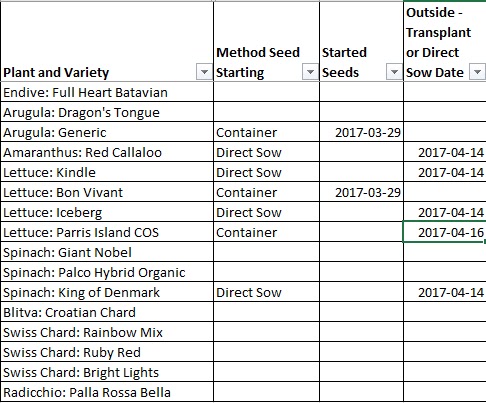 My next post on garden plans should be about root vegetables - I've already got some beets and carrots in the ground.  And how are your garden plans coming along?

Around the Yard: April 9 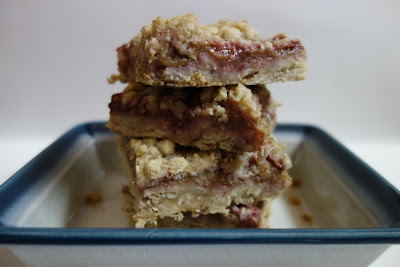 I used this picture for the main photo as it was the only bright photo I took this week - Balsamic Strawberry and Rhubarb Oatmeal Bars I made earlier.  And I still have some of each left in the freezer which should be sufficient to last until I have fresh rhubarb of my own.  The remaining photos are from out and about in the yard today and it can take a while for the green grass and bright flowers of spring to arrive in this part of Ontario. 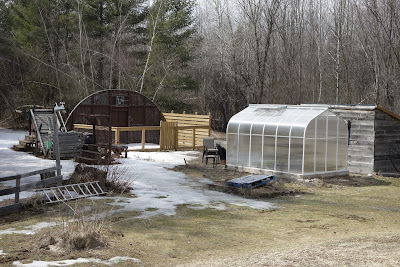 Despite the dreary look, it's a beautiful day today.  As I'm writing this, it is 15 degrees C according to my new backyard AcuRite Weather Station (which is now the weather link on my blog sidebar).  I picked it up on sale over the winter and I'm still trying to understand all of the readings. 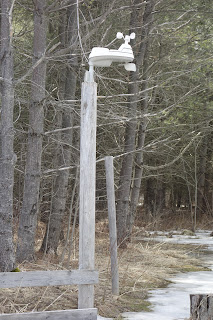 The one part I can read perfectly well though is the amount of rain I've had in my yard - 95 millimetres in the past week.  As you can imagine, I've got a few temporary ponds here and there.  I've used a bucket and put some of this water into the rain barrel to use for watering the greenhouse and the nearby garden (where I expect the squash will end up this year). 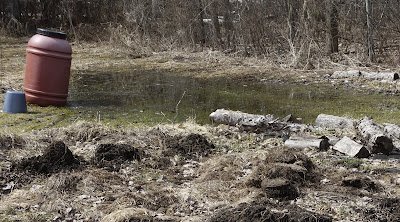 But I also still have plenty of snow. This will take at least another month to melt due to the trees blocking much of the sun at this time of the year. 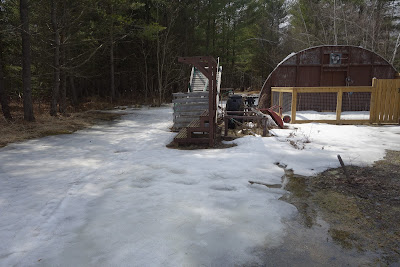 I've been turning over some of the main garden area and have put out some of the leftover hay bales from last year that had been stored in the garage over the winter. I still have another six to put out once I decide where they'll go.

And I'll leave off on a brighter note - the tomato and pepper seedlings are happy to see some natural light, albeit through the windows from inside the house.  Here are just a couple of the varieties I have underway: