2016: My Year In The Vegetable Garden

Happy New Year!  A bit late, for sure, but then I am a bit late in sharing this post.

Nevertheless I wanted to share my results from last season in the vegetable garden as I am already underway with 2017 plans.  I have worked my way through the seed packets I have on hand and have flipping through the variety of catalogues that have arrived in the mail.

I am excited that my overall harvest for 2016 at 218.9 pounds was an increase over the 186.4 pounds in 2015 (a 17% increase)!  And it was mostly thanks to my huge harvest of peppers - a very successful year with 36 pounds of mostly sweet peppers (Xanthia, Gypsy and Feher Ozon being the largest yields). 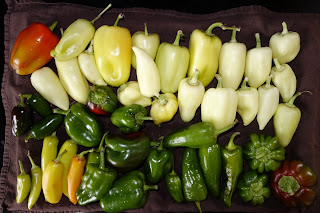 It was also a slightly better year for cucurbits - mostly winter squash in my case.  I had moved my squash patch to the other side of the property in the hopes of escaping the mass of squash bugs from the previous year.  I also treated the plants with neem oil more often than the previous year plus switched to some different varieties that were supposed to be vigorous growers in the hopes they would be sufficiently mature and sturdy by the time the bugs found them. I definitely had less problems with pests, but I still only managed 13 pounds more than 2015.  Still, a positive result and I'll rotate that crop to yet another area this year to confuse the critters again.  :)

This was my second year weighing and tracking my harvests.  More importantly, I had started in 2015 to note the date when I first started seeds, where they were started (indoor, direct seed into garden, in greenhouse) and so was able to simply replicate the timing in 2016 or adjust for those that needed some scheduling change.

And here's an example of some of the other pieces of information I keep to help with planning each year ... sometimes I forget to fill in all of the blanks!


As far as new crops for 2016, I had some successes and failures with the following coming to top of mind:

Crystal Apple Cucumber:  I grew these in the greenhouse, and they were not overly productive.  I also found them bitter in taste.  I read somewhere that too much heat can produce bitterness, but ... what the heck ... I thought cukes loved the heat?  Not sure if I'll bother with these again.

Sweet Potatoes:  This was my first attempt and I had found a short season variety that is commonly grown in my area.  I did manage to grow some, maybe about 20 in total from 4 plants.  So not great yield and they were quite small.  I loved the taste and equally love the idea of growing these myself, but they were a tremendous amount of work with developing the slips indoors.  I doubt I'll do these again, but if I run across the same producer at the Seedy Saturday this spring, well, I might be convinced to give them another go.

Hale's Best Melon:  I had fantastic results with this muskmelon and was giving it away to friends as I had so many. I also chunked some up and froze it - actually just ate some tonight!  However, I think this was a function of the great weather I had here last year with high temperatures and just enough rain to keep things going with a bit of help now and then.  I will definitely grow them again, but I believe my success was more luck than skill.

Croatian Chard:  A friend gave me some seeds for what he calls "Blitva" - from what I can tell, it's a Croatian version of Swiss Chard.  It grew like a weed and was delicious!  I have some seeds left from the batch he gave me, but he's going to have to hook me up with his supplier next season because this crop is a keeper for sure.

Fingerling Potatoes:  OK, well, fingerling potatoes are definitely not a new crop for me but I have discovered two new favourites that were new this year: Linzer and Pink Fir Apple.  I found these seed potatoes at the Ottawa Seedy Saturday and hope to find more again this spring.

Feher Ozon Peppers: And I've already mentioned my success with peppers above including the pricier Xanthia (well worth it) and Gypsy peppers from West Coast Seeds.  But I was thrilled with the Feher Ozon which were dried and ground into paprika.  They also had a very large yield although, again, this is likely a function of the very good weather I had last season.

I had some other new crops that I was so-so about such as collards which I enjoyed but didn't love and the mustard greens which kept bolting and I never really had a chance to eat any.  But I think I'll try both of those one more year and see how it goes.

So I hope my next post won't be so late as this one has been, but I'll catch up next when I've got my seasonal seed order in place and will share my plans for this coming year.

And I'll leave this off with a picture of another new favourite experience from last season - I absolutely adore my new dehydrator and the many things I was able to do with it!! 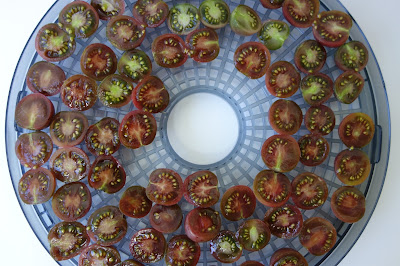