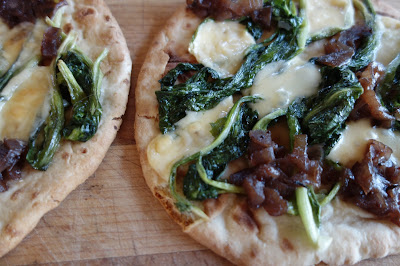 I love pizza, but I don't always want to make the pizza dough.  I had some naan bread in the freezer leftover from an Indian meal a while back so it is an easy substitute.  As for the topping, wow, the combinations are endless.  So this is just to share one version that I had recently. 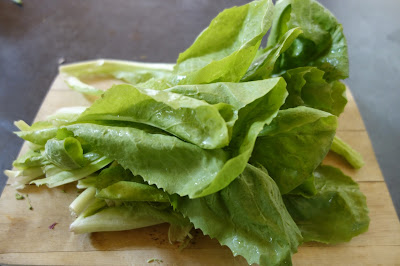 I've been harvesting a lot of escarole early as it was planted close together and needing to be thinned out (still probably more to be pulled before I leave the rest to fully mature).  It has a slightly bitter taste (less so at this early stage) so combining it with the sweetness of my red onion and orange marmalade was a great match (or just use caramelized onions).  Goat cheese would also work well here, but I liked the idea of a smoked cheese.

Method:
After washing the escarole, saute it (with some water still on the leaves) in a small amount of olive oil.  Once the greens have wilted, add some sliced garlic.  Cook just another minute or two then add 2 Tbsp of heavy cream.   Turn off heat but leave on the stove and let cool while stirring occasionally.  The cream will partly evaporate but some will cling to the escarole.  This would make a fantastic side dish - in fact, I ate half of it before making the flatbread. 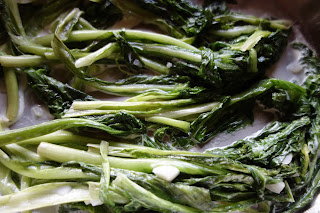 Toast the flatbread then top with your choice of ingredients.  Place under the broiler for 1-2 minutes or until toppings are heated through and cheese has melted. 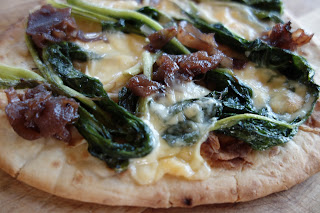