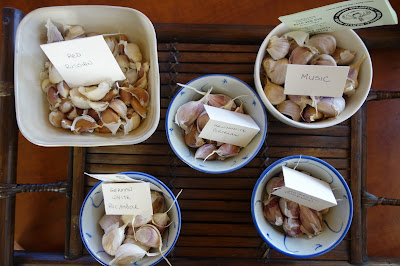 After growing Red Russian garlic (the most common in these parts) for a number of years, I decided to try Music (along with the Red Russian) for this past season.  I thought the Music had a milder flavour, but I still liked it and the bulbs were larger than the Red Russian.  I also had some challenges in 2015 with leek moths doing some pretty serious destruction to both varieties so this wasn't the best growing year to use as any baseline measure.

I went to the Perth (Ontario) Garlic Festival in August.  I had planned to write a post about it, but found it rather dull (friends who have gone most years have said it seems to have suddenly gotten smaller).  However, I did pick up some interesting new varieties which I'll try this year.

All the garlic I'm growing is Hardneck which includes three varieties: Rocambole, Porcelain and Purple Stripe.  Since I've always grown Red Russian, I am already familiar with Rocambole.  What I didn't realize was that the Music I grew last year was of the Porcelain variety, not also a Rocambole.  That is likely why the bulbs were bigger - it seems that is typical of the Porcelains. 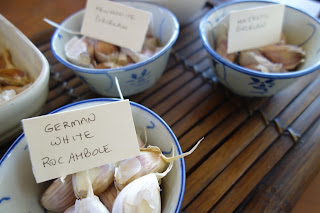 I've planted 4 of the 5 types into 2 raised beds.  The raised bed frames were moved from elsewhere in my garden and have just been filled with the topdressing soil I had ordered in the spring (yikes, I still have about 8 yards of soil on my driveway that should be dealt with before the first snow).  Just so I remember myself next summer when I begin the harvest, they are planted as follows:

Leftmost Bed - two rows each (L to R): Majestic Porcelain, Mennonite Porcelain and German White Rocambole. All three of these varieties were purchased at the Garlic Festival from Ken Best of Norwood Ontario.  And such huge cloves.  I had two bulbs of each variety with 4-5 cloves per bulb.

Majestic Porcelain: Creation of this garlic is credited to Paul Pospisil whose Beaver Pond Estates was just a few minutes from my previous home in Lanark County. 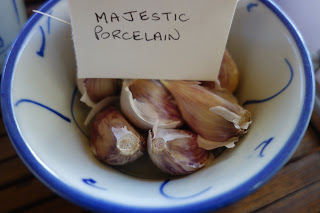 Mennonite Porcelain: The origin of this one is a bit more confusing but seems to have been named by Railway Creek Farms after receiving a bulb from a Madoc resident (okay this is weird, because I also used to live in Madoc so this year's garlic is like a tour of my previous residences).  They called it Mennonite to remind them where it came from - farmers in London Ontario area named the Bass Brothers. 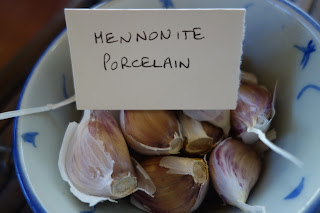 German White Rocambole:  Can't find much about the origins of this one. 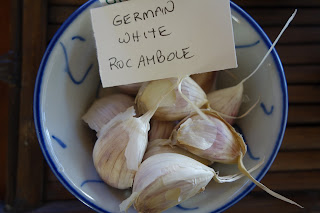 The second raised bed was filled with the Music.  I didn't have enough of my own to plant so just bought some more seed garlic (also at the Garlic Festival).  The Music is from Arran Hill Garlic Farm of Allenford Ontario.  There are too many references to the origins of Music garlic to know which is accurate but it is quite popular in colder climates.  I should have about 25 of these next summer. 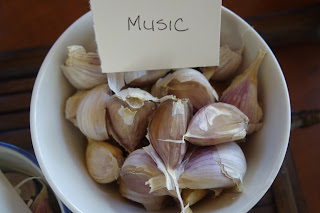 I haven't planted the Red Russian and hope to get to that by next weekend latest.  All of the Red Russian came from my friend Dan (grown in Lanark County).  I'll probably put in at least 50 of these to bring me to close to 100 garlic in total. 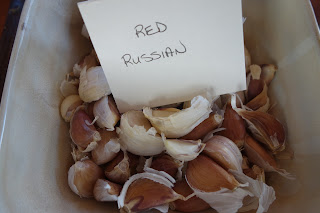 The two planted beds were covered in straw - a must for me right after planting as my cat likes to dig into fresh dirt and I don't want the cloves getting moved around.  Within a few weeks they should start to get some good roots.  The roots and the mulch (I'll add more before the first snow) will help avoid heaving from frost.

And so that's one more garden chore (almost) crossed off my list for the fall preparation.