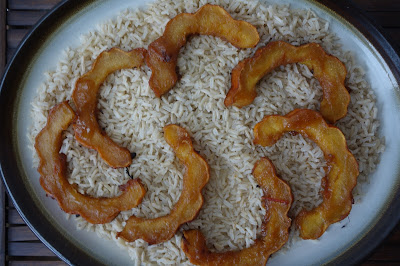 My official new favourite way of eating squash!!  This was really delicious and I will definitely be making it again.  BUT ... I can't believe how hard it is to cut squash into slices.  I've never done that before - I usually bake winter squash in halves or big chunks.  If there is some special trick to making it easier, please let me know.  I just found it really hard to cut 1/2 inch slices with such tough skin. 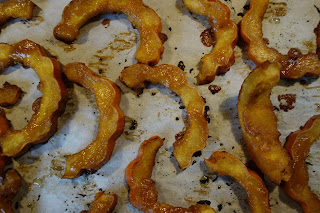 But the flavours were so good!  After slicing up the squash, I tossed it with a combination something like this (it was a bit loosey-goosey): 2 Tbsp white miso paste, 2 Tbsp hot sauce, 1 Tbsp maple syrup and 3 Tbsp olive oil.  No salt required as the miso is enough.  Then bake at 400 degrees F for 20-25 minutes, flipping halfway through.  What little sauce was left from the original toss was spread over the squash at the midway point. 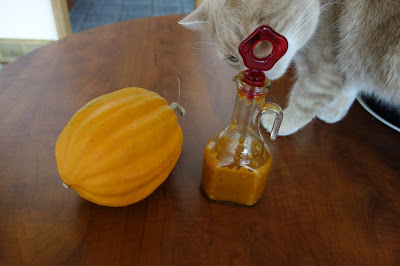 I used my homemade hot sauce in this recipe (not much left now).  I really wish I could remember the recipe because it is awesome.  And hot.  But not as hot as the hot sauce I made with the hinklehatz peppers.  Whew, that is used in spare amounts, for sure.

I served it with baked trout that also had a miso glaze, but more of an Asian style (soy sauce, ginger, rice vinegar, sesame oil and the miso paste).

A great way to use one of my harvests.  I have two squash left in the cold room - a spaghetti squash and a marina di chioggia. I'll be surfing the net to decide what to do with these two in the coming weeks (unless someone has a really good idea for me to try??!).