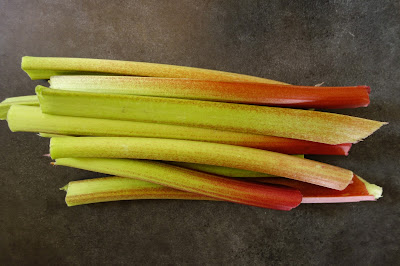 This is my submission to Harvest Monday hosted by Dave at Our Happy Acres.  Harvests are generally slow at this time of the season but the perennials are starting to kick in.  I did not post last Monday but the picture above should have been posted then.  I've harvested a second batch of rhubarb this week as well.  The first batch was used to make the rhubarb syrup I posted about Saturday (the second batch frozen for later use).

I've also had more asparagus here and there.  I don't get more than a few spears at any one time so no reason to take a pic.  And it turns out that I have asparagus beetles for the first time (at least the first time I've noticed) - in both asparagus beds on opposite sides of the house.  Here is what a few of the spears look like as a result ... actually the picture doesn't do it justice, the affected spears are pretty much brown and lifeless. 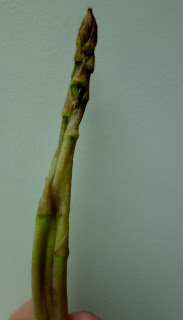 I've been picking them off as there aren't too many but I obviously didn't catch them soon enough.

And the first harvest from an annual this season comes from a kale plant that I started indoors along with the rest of the brassica starters (cabbage, broccoli, cauliflower) and transplanted out about a few weeks ago.  Just a few leaves but enough to do something with! 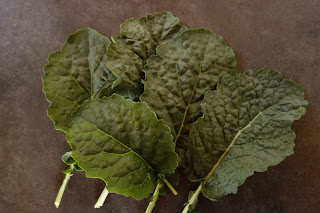 I am really looking forward to some rain although there isn't much in the forecast.  I can manage watering my garden but farmers must be hurting with the hot and dry spring we've had.