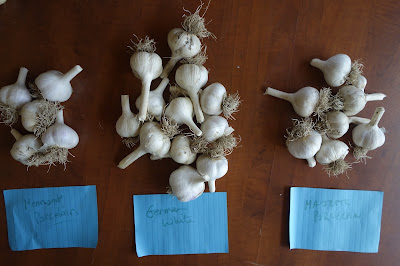 The last three types are shown in the main photo (L to R: Mennonite, German White, Majestic).  I've used a few (mostly the Mennonite) earlier in the season, but should have ended up with 8 or so of each.

The German White was to the right of the Mennonite Porcelain in the garden bed and it is likely that I've mixed the two up as I seem to have more of those than I planted!  Or for that matter, I could have mixed them all up when harvesting as the rows weren't quite as straight as I had thought they were when planting.  They all look very similar to me ...

I'm pretty happy with the results as most of the bulbs have a good size and seem to be curing well enough for storage.


And the Red Russian: 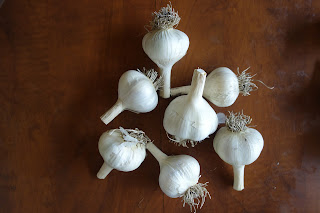 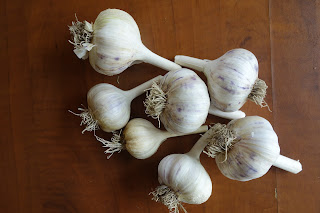 But the harvest was not without problems.  I think that I left them in the ground too long and some have come out a bit mushy.  When I separated the cloves of the mushy bulbs, they were sticky and have a pungent odor (almost like roasted garlic).  This happened with some Music, Red Russian and Mennonite, all of which were in different beds, but all harvested around the same time. 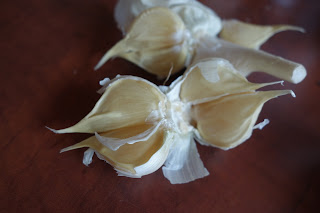 And some of the Music bulbs, though not mushy, have a bluish-green tint.  I'm keeping those ones separate from the others in case it is abnormal.  If anyone has any idea what that might be, I'd appreciate some input - I really don't want to toss them so hoping they are OK to eat (the only reference to "blue-green" on bulb is Penicillium Decay but I don't think that's it as mine aren't rotting at all, they just seem discoloured).


I will likely pop by the Garlic Festival in a few weeks to pick up some seed garlic for planting this fall (I definitely don't have enough to eat and plant).  And I will check with a few of the growers to see if they have any ideas what this might be.