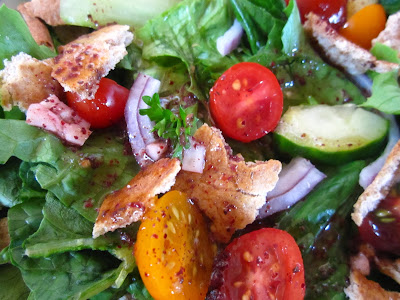 I used to go to a quasi-Lebanese restaurant in Ottawa called the Brookfield most Thursdays for lunch.  Why Thursday you ask?  It was the only day each week when they made Fattoush Salad (bread salad).  And I loved it!  Nowadays I pop by the Brookfield for breakfast now and then; I'll have to see if they still make this salad. 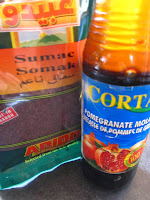 In the meantime, here is my home version.  There are many variations on the dressing, but the key ingredient in any Fattoush Salad is ground sumac.  This spice is made by grinding the dried fruits (referred to as drupes) of certain types of sumac trees - I am guessing these are the same kind of trees that I used to have at my old place; ugh, they grow like weeds!  Anyway, the spice tastes a bit sour-lemony.  And another common lebanese ingredient found in the dressing is pomegranate molasses.  But this is optional if you don't have any on hand.

I found many similar recipes so I used one from this website for the dressing.  This is the recipe as shown but I reduced the amount of olive oil.  I don't really understand the purpose of soaking the ground sumac; some recipes called for that technique but many did not.  I recommend doubling this recipe if you are making enough salad for 4-6 servings.

Put all ingredients into a small mason jar and shake together.  Set aside. 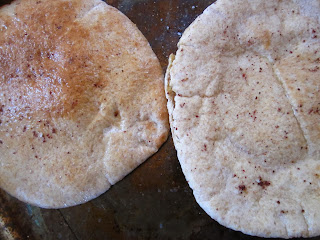 The Bread:
Some versions did not include toasting the bread first.  But usually "bread salads" are a way of using up stale bread so that being the case, toasting would not be required.  I had fresh pita bread, so I baked it for a crunchier texture.


Drizzle olive oil onto two pieces of pita.  Sprinkle with sumac and kosher salt.  Rub it in to ensure the pita are evenly covered.  Bake at 350 degrees F until crisp and browned.

The Salad:
Well, this can be just about anything you want, but lebanese cuisine often uses a lot of parsley, so don't forget that!  Here is what I used: 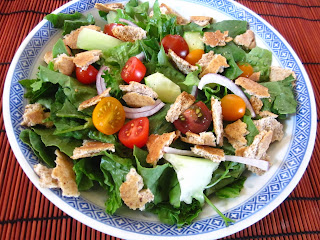 Combine salad ingredients in a large bowl.  Break up the pita into pieces and crumble over salad, toss with dressing.

Although I intentionally baked the pita to crisp it a bit, I actually like to add the dressing a few minutes before eating to let it get a teeny bit soggy.   It's just better that way ...