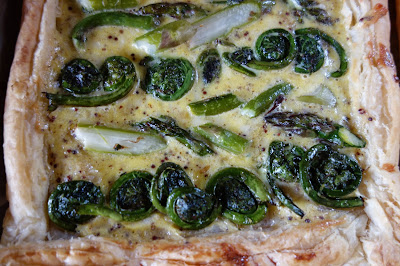 My asparagus patch is only in its third year which means that I still need to be careful about how much I harvest.  I have decided to leave at least one or two spears per crown (I had planted 12 crowns) to mature into ferns.  And I'll harvest the rest. 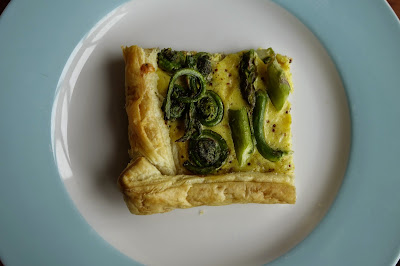 The problem is that I only get 3 or 4 spears every couple of days.  And if you eat asparagus, you probably know that it's best eaten the day it is harvested. 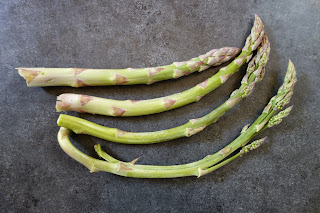 I wanted to make this an all asparagus tart but didn't have enough asparagus ... so I mixed in some locally harvested fiddleheads (purchased at B&H in Kemptville - awesome local store that supports locally raised products).  The asparagus and fiddleheads make a great combination; in fact, I think they taste somewhat similar although asparagus has that certain flavour that I'm not sure how to describe. 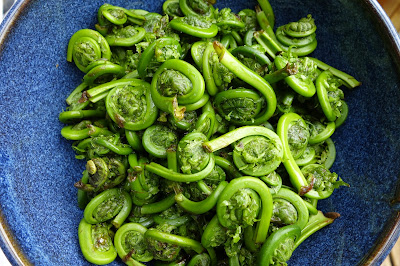 The rest of the tart is kind of like welsh rarebit, without the beer ... egg yolks, cheddar, mustard.  Spread that mixture on prebaked puff pastry, top with the grilled asparagus and fiddleheads and you've got a great brunch dish.


Method:
Preheat oven to 400 degrees F.  Toss asparagus and fiddleheads with olive oil and a pinch of salt.  Bake in oven for 10 minutes.  Cool slightly and toss with lemon zest. 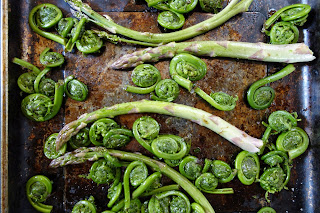 Roll out each sheet of puff pastry.  Fold in the edges to form a crust.  Poke the inside several times with a fork ... this should keep the base from puffing up but leave the edges higher.  Bake at 400 degrees F for 12 to 14 minutes until lightly browned. 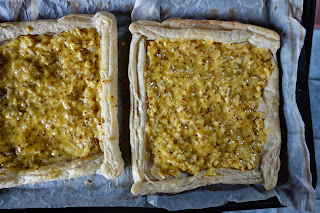 Stir together the eggs, cheddar and mustard.  Add a pinch of salt and black pepper.  When the pastry has cooled just slightly, spread on the cheddar mixture.  Then top with the grilled asparagus and fiddleheads. 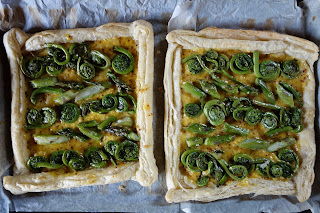 Bake (again at 400 degrees F) for 12 to 17 minutes until filling is cooked and firm.  Allow to cool before cutting.  Serve with a side salad for a light lunch. 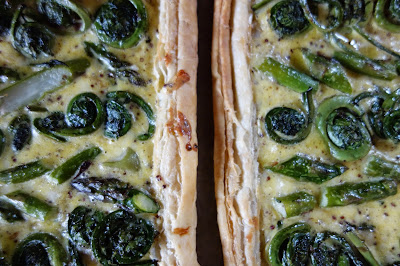