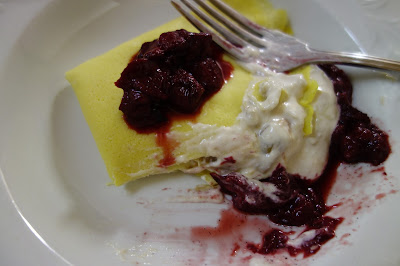 My rhubarb plants seem to be growing slowly - new plants so I'm trying to be patient.  I harvested just a little bit recently and made this delicious breakfast / dessert (totally works for either!).  The strawberries are the last (seriously this time) bag of strawberries that I saved from last summer.

In a saute pan, combine the following and cook on low-medium heat until softened. 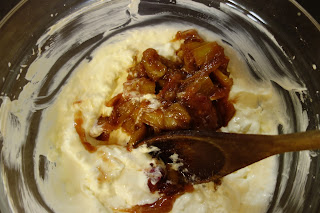 
For the yogurt, I used Astro Balkan style - it's the original Greek yogurt - been around for years so not as pretentious.  :)

Once the rhubarb mixture has cooled, fold it into the cream mixture.  This can be made up to two days ahead of time. 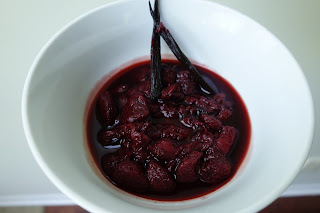 In a small casserole dish, sprinkle 1 tsp of sugar on 1 cup of hulled strawberries.  Cut the vanilla bean in half then scrape the seeds onto the strawberries.  Chop the bean into a few pieces and toss it into the mix.  Bake at 400 degrees F for about 10-12 minutes.

This is the same recipe I used for "crepes with plum chocolate nutella".

Whisk until smooth.  Allow to rest - 10-15 minutes.  Just before preparing crepes, whisk in a 1/2 cup soda water.  Pour about a 1/2 cup of the mixture into a heated non-stick skillet.  Tilt the pan to swirl the batter into a thin layer around the pan.  It should only take a half to one minute per side.  Place on a clean towel while cooking the remainder.

Spread each crepe with the rhubarb cream and fold or roll.  Top with warm compote.  Enjoy! 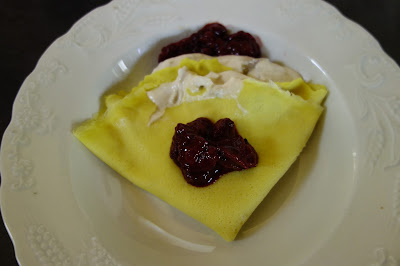