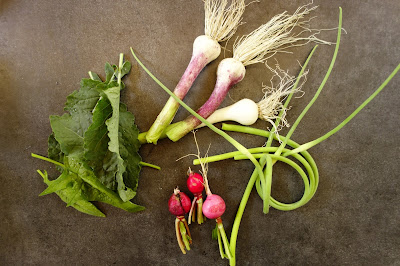 One of the many benefits I get from participating in Daphne's Dandelions Harvest Monday collection is the documented history of my harvests.  I was reviewing last year's to see what I had going on this same time.  Although I'm far advanced with crops that have a longer time to harvest (e.g. winter squash), I am actually behind with many of the more spring-like crops - greens, that is.

Last year at this time, I was already harvesting beet greens and swiss chard; both of which are barely a glimmer in my garden right now.  And it's all because I decided to test the "plant when the ground can be worked" theory.  Now the theory itself isn't necessarily to blame - I'm pretty sure it's just the area where I did this test ... last year's "3 sisters garden" which itself was a disaster.

The swiss chard I planted back in mid-April has barely sprouted!  I've since planted some more but not soon enough for me to enjoy any for at least another couple of weeks. 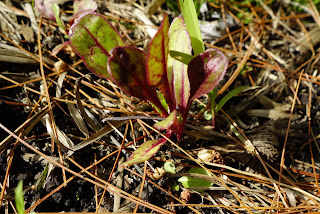 And here is the curly kale I planted in April (barely visible) ... compared to some I planted only a couple of weeks ago! 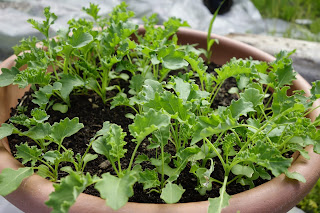 So the area is obviously not suitable for whatever reason.  Well, plants are growing, just VERY slowly.   Anyway, enough complaining about what isn't growing ... let's talk about what is growing and getting harvested!

In the main photo above, you see that I've pulled some of my garlic already (and the few scapes that survived) - this is because of the leek moth infestation.  I'm going to pull most of the garlic early so I was just testing how far along it was (I hope I can make it another few weeks without losing all of it).  I also had some radishes and just a wee bit of kale and spinach.

And I've finally had a good harvest of lettuce to keep me in salads for a few days. 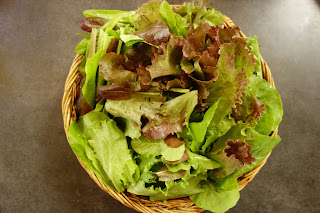 And finally ... my first handful of peas!  And that's it for this week. 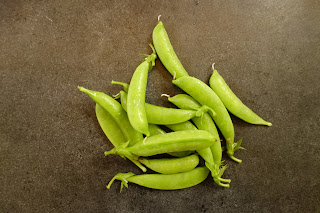