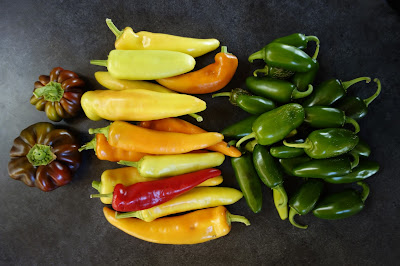 Whew ... it's hot and sticky here.  And more of it to come according to the forecast (30+ Celsius for the next few days).  Here's what I've been picking out of the garden when I manage to get myself outside in this heat - check out Daphne's Dandelions to see what other gardeners have going on at this time.

The Hungarian Hot Wax and Jalapeno peppers in the photo above were pickled.  It was too hot to go through the full canning process so I just pickled them and left them in the fridge.  On the left side of the picture are pimiento peppers (Stokes seeds).  I probably picked them a bit early but they are an odd shape and I'm not really sure I like them - they taste fine, but a low flesh to seed/core ratio.  Probably useful for a stuffed pepper dish. 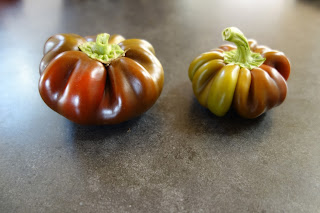 My rhubarb is slow to grow for some reason - I've heard that you shouldn't harvest rhubarb after June but don't remember why; so I'm still picking some here and there. 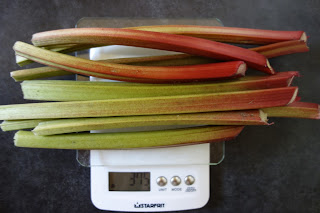 The Neem oil treatments have really helped with the cucumber beetles and I am finally seeing some squash production.  I spent a few days picking the adult beetles off the plants (using Daphne's advice, I had a bowl of soapy water to drop them into so they couldn't get away), then sprayed on some Neem oil once a week for the past three weeks.  Unfortunately, I was a bit late in doing this and have lost almost all of my pumpkin plants to the beetle damage, but at least I have some summer squash!  I had two separate harvests, shown here with the lot of beans I've been picking: 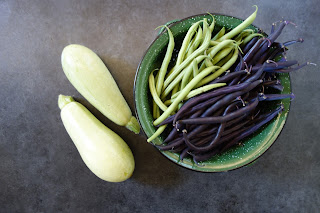 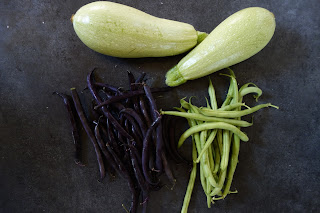 In total, I've harvested just under 3 pounds of beans this week alone!  As for more squash, I've had one yellow crookneck, shown here with some kohlrabi. 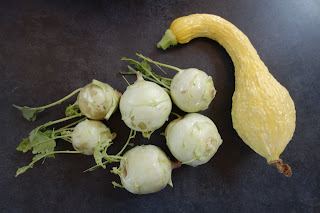 I've had a bit more kale, chard and lettuce (but not as much as I'd like!). 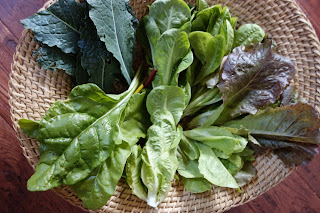 This lettuce is growing in a strange way.  It's Kindle lettuce and is supposed to be like a butterhead .... but most of it is growing like this.  I suppose it's bolting in its own way, not really sure.  The leaves are still nice and tender so OK for now, I guess. 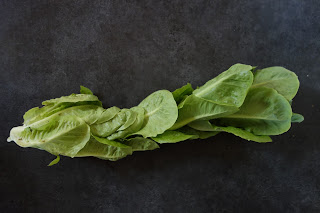 And some more potatoes - fingerling and russian blue. 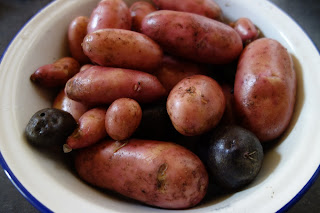 The potatoes were tossed with olive oil, thyme and oregano, and then roasted.  I added some of the beans in during the last 15 minutes.  Yummy! 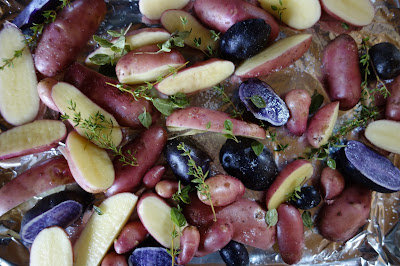