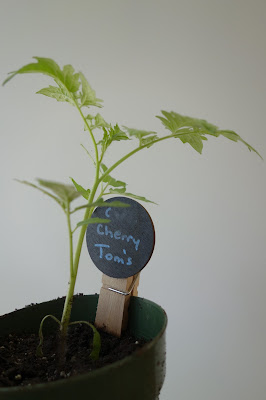 This is my submission to the Harvest Monday collection hosted by Our Happy Acres. As I have nothing to harvest this early in the season, I thought I'd share an update on my seedlings - which will hopefully lead to many successful harvests later on! 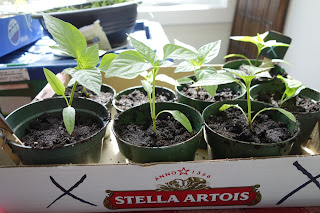 I've spent part of this weekend transplanting these from their peat pellets into 4" pots.  I rip a small tear in the bottom of the peat pellets then simply pop them into pots and fill them up with potting soil. 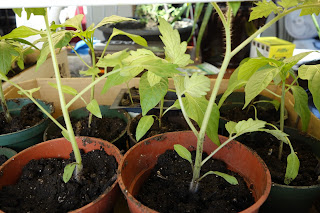 So far, I have transplanted the following seedlings. 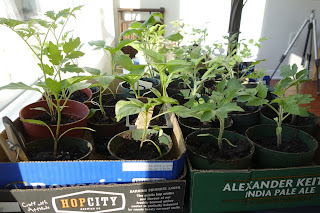 The San Marzano seeds were several years old and I was not expecting so many to germinate.  I wasn't really planning to grow sauce tomatoes but felt I should use up the rest of the seeds rather than throw them out.  The Heirloom variety was a mixed seed packet including some of my favourites like Black Krim and Brandywine. 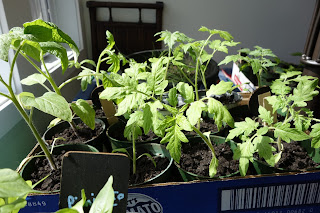 After commenting previously how hot peppers have always been so easy for me to grow, I was somewhat surprised that only one of the jalapenos has germinated well enough for transplanting, but the seeds are several years old.  There are a couple more jalapenos on their way but are just too small for now.  I also have just a few Hungarian Hot Wax (again, another surprise that I've struggled to get many seedlings) and only a couple of Ancho (disappointing for sure, but I seeded another set a couple of weeks after the first and still hoping to get some more).  I also have three more tomatoes seedlings and more Feher Ozon.  These will all need at least another week or two before being moved into the larger pots. 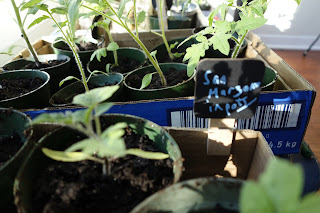 I also had many that have not germinated at all.  I will give them another week or two between the heat mat and the lights.  I certainly hope to get more Ancho and Hungarian Hot Wax as I have so few, but I also did not manage to germinate a single Cowhorn pepper - I tried these same ones last year as well and did not get a single seed to germinate.  I would like to blame the seeds but I really need to consider my germination methods.  I am definitely not going to make the effort to pre-germinate seeds as that is too much work for me but I have read quite often that peppers don't germinate well in peat so I may need to reconsider my approach next year. 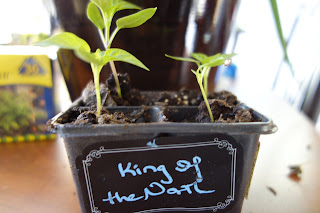 In the meantime, I will keep my fingers crossed for the remaining seeds!  And maybe not a rush as it just snowed another few inches last night.  Ugh.  Should be gone within 24 hours with the warmer temperatures but getting very frustrated that winter won't go away.