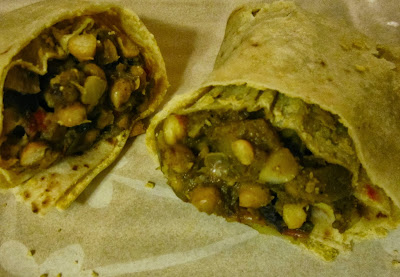 What I miss most about living in Toronto (and Vancouver before that) is the easy access to so many different cuisines.  I used to work near the Eaton Centre and would often get take-out from a caribbean fast food place in the food court - usually callaloo with rice and beans.  I later discovered some of the roti shops like Bacchus Roti and developed a mild addiction.

There are a couple of places to get roti in Ottawa but not very convenient for me.  Besides, my favourite filling, chickpeas and potato, is the easiest thing to make so why not just make it at home?  Because of the roti shells!  The shells (dhalpuri roti) used are so soft and delicate; an absolutely integral part of the dish for me (they can easily be replaced by a tortilla or other flatbread but that is so not the same thing!).  Not only are the shells extremely thin, but each shell is actually two layers of thin dough with a layer of ground split peas in between.

Since I lack patience, I knew I needed to buy the bread rather than attempt to make it.  For some reason, I thought it would be so hard to find that I never bothered ... until this week.  The first caribbean store I visited (Savannah Afro-Caribbean Products on Bank Street) had frozen shells.  I cannot believe I waited so long before looking! 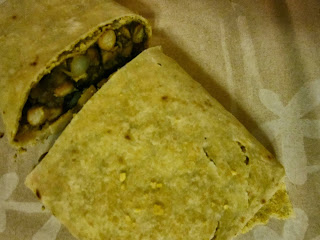 Mmmm ... craving has been satisfied for now.  But that won't last for long.  Next time I'll try a curried goat filling. 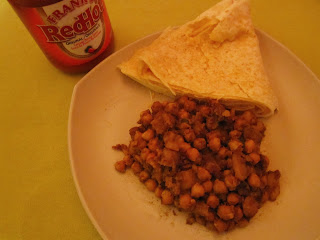 *I used a jalapeno chile as that is what I had on hand although maybe a scotch bonnet is more common?  Obviously it depends on how hot you want the filling.  Either way, a good roti always requires a side of Frank's Red Hot Sauce.

The roti can be served in the usual style with the filling rolled into the roti shell or the shell can simply be served on the side. 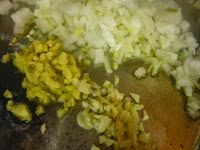 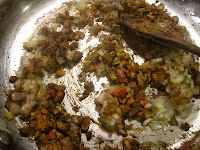 Saute until onion softens, then add spices.  Cook for 2-3 minutes until spices are fragrant. 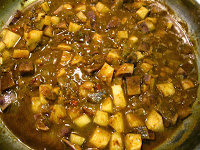 Add potatoes, stirring to combine with the onions and spices.  Add about 1/2 cup of water or more if necessary.  Cook for about 7-8 minutes.  Add chickpeas and continue to cook until potatoes and chickpeas are fully tender (at least 30 minutes on low heat), adding water as needed.  I probably used about 2 cups of water in total. 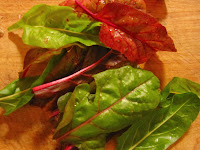 I had some swiss chard and cilantro from the garden available, so I tossed a handful in with the chickpeas.  Spinach would also work very well or you can leave this step out.

When the potatoes and chickpeas are tender and the liquid has been absorbed or cooked away, you are ready to roll!  Place some filling on the lower half of a roti shell, fold bottom up, sides in, then toward the top. 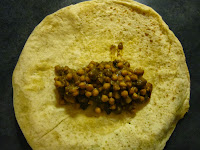 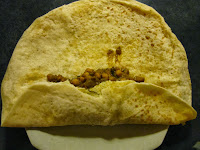 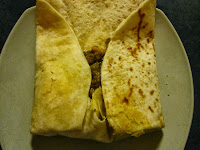